At first glance it looks like golfers from one of the resort’s world class courses took a wrong turn.

But those aren’t golf carts on the streets in upscale Bay Harbor, Mich. Rather it is the largest per capita collection of low speed vehicles in the world. 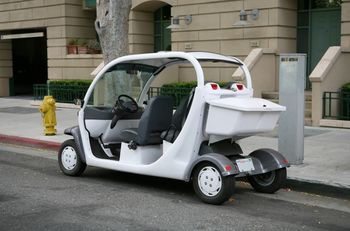 The brownfield-turned-upscale resort in northwest Michigan has a fleet of around 350 low speed vehicles, said Denny Brya, general manager of Bay Harbor.  Bay Harbor underwent a massive facelift in the early 1990’s when asbestos, coal and dust from a former cement plant were replaced by boutiques, equestrian clubs and golf courses.

The community has 20 mph speed limits, said Candace Fitzsimmons, executive director of the Bay Harbor Foundation. People don’t take the cars outside of the community, she said.

Slow-moving resort towns are the perfect fit for low speed vehicles.  Now researchers are looking into if they could work in bigger towns.

Among them are cities like Bellamar, N.J., Peachtree City, Ga. and suburbs outside of Los Angeles. They want low speed cars on their roads to reduce emissions.

It’s going to have to start with changing the road structure, said Katie Larsen, a doctoral candidate in engineering at the University of Texas.

“I just don’t see how low speed vehicles operating on the same roads as highway (full-size) vehicles,” said Larsen, who is researching how cities could make such a transition. “Ideally they’d be separate.”

Still, there’s a lot of potential in taking the cars outside of retirement communities and smaller towns, especially for short, non-highway trips in the city, she said. And it’s important to give low speed cars the same access as full-size cars to spur the change.

“If we can’t demonstrate to people that the performance of their transportation system will be better or equal to what they have now, they’re not going to switch,” she said.

There are documented air quality benefits.  A program in suburban Los Angeles provided families with a low speed vehicle but allowed them to use their full size car whenever they wanted. Preliminary data shows a 23 percent average dip in transportation-related carbon dioxide emissions per family.

But sharing the roads can be downright dangerous.

There are about 45,000 low speed vehicles on U.S. roads, according to the U.S. Energy Department.

The National Highway Traffic Safety Administration established low speed vehicle safety standards in 1998, which defined the cars as those for short trips, and in retirement and planned communities.

When it comes to the main roads, states regulate.

Low speed cars must have four wheels, a top speed of 20-25 mph, and be equipped with headlamps, tail lights, stop lamps, reflectors, mirrors, a parking brake, a windshield and seat belts.

They usually do not have airbags. And this, coupled with their diminutive size, is stoking fear that they’re unsafe.

“By allowing low speed vehicles and mini-trucks on more and more kinds of roads, states are carving out exceptions to 40 years of auto safety regulations that save lives,” David Zuby, the Insurance Institute for Highway Safety’s chief research officer, said in a prepared statement.

Crash-tests between low speed and full size cars at the institute had grim results. In one test a sports utility vehicle was crashed into the low speed vehicle at 31 mph. The dummy’s head in the smaller car almost went through the windshield, and results indicated there would have been serious injury or death for real occupants.

As long as full-size cars rule the roads, it may prove difficult for low speed cars to break out of their current niche.  But for the folks in Bay Harbor, they’re a perfect fit. The community takes pride in its propensity for tiny cars.

“Bay Harbor has environmentally conscious people, and these vehicles work well with that,” Fitzsimmons said.

And their tiny cars have garnered big attention.

“Three years ago we were in the Guinness Book of World Records for having the most electric vehicles in one parade,” Fitzsimmons said.

Bay Harbor had 218 little cars participate. It was the first activity of its kind recognized by Guinness.