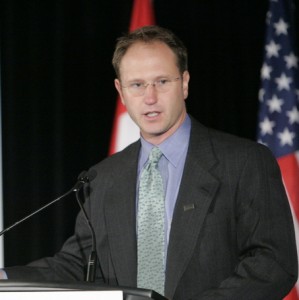 Cameron Davis is the face of the Great Lakes at the Environmental Protection Agency. The senior adviser on Great Lakes issues to the agency’s administrator was on Michigan State University’s campus Friday to announce Great Lakes Restoration Initiative grants awarded in Michigan. Beforehand, he stopped by the Great Lakes Echo office for a quick interview. Here’s what he had to say:

On what an evolving Great Lakes Restoration Initiative will look like:

“What it would look like is continually driving toward more action-oriented projects: Real on the ground, in the water work that makes a difference to actual species and actual ecosystems and sub-ecosystems in the Great Lakes. The first year, I think we did a good job of weighting our work toward those action-oriented things. We had some areas where we were funding study work and monitoring and things like that in essence to start to lay the groundwork for future action. But as we move from year to year the goal is to do more and more action oriented work.”

On the abundance of monitoring and research projects funded by the GLRI:

“There’s a dichotomy here in that there’s a lot of eagerness to do more action-oriented work and less study, while at the same time there’s a high demand for accountability to show results. Well, how do you provide accountability? You have to assess, you have to monitor, you have to track what’s going on. We thought the best way to do it would be to front-load our funding so that we are getting some of those accountability mechanisms up and running, which involves tracking and monitoring and surveillance. But then over time, we start to move the dial toward more action.”

On the EPA’s Great Lakes Restoration Initiative Action Plan, which the agency finalized in February, but has only recently requested nominations for scientists to “assess the appropriateness of its measures and actions to achieve its stated priorities and goals,” as required by Congress:

“The GLRI has been a dream for a lot of people, myself included, but it really started with the President saying in February 2009, ‘OK, here’s the budget.’ It was the money that made this real. And the money was the signal to us: ‘OK, you need a plan. And you’re going to need to get these investments out the door.’ It’s been a little bit like building the bridge while you’re in the process of driving over it. Some might say ideally you get the science out first and you get a science advisory board report out first, and then you create the plan based on that, and then you get the money out the door. There’s been no such luxury in this. The budget was set in February ’09 and we had to just move. We couldn’t sit and wait for a scientific report. But we started, we’ve got a foundation, and now the [science advisory board] has something to actually react to, which I think will help.”

On the Great Lakes Water Quality Agreement between the U.S. and Canada, which is under renegotiation:

“One of the challenges and one of the opportunities at the same time is to make sure that the water quality agreement and the Great Lakes initiative dovetail. What we don’t want to do is have all the investment work over here and all the binational priority setting over here. That will confuse people, and it won’t be a service to the ecosystem because we won’t have married our priority setting with where we can put our money where our mouth is.”