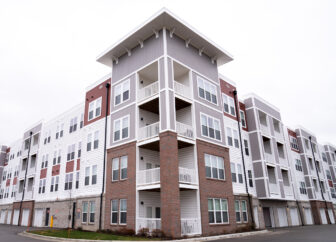 Volaris Lansing is an apartment complex converted from an old hotel in Lansing, Michigan, a city leading that state in adaptive reuse. Image: Audrey Richardson

You can recycle cans, clothing, wine corks and takeout containers. How about an entire building?

“Currently, over 77,000 apartments are undergoing conversion,” said Andrea Nuculae, author of the report. “The numbers that our report showed last year (2021), a total of 55,000 units under conversion, come as another confirmation of the growing popularity of adaptive reuse.”

A new project is taking place to restore LaSalle Street in the center of the busy city.  Chicago Mayer Lori Lightfoot has offered tax incentives to developers who want to convert office buildings to residential use there.

“EPA estimates that 40-60% of the solid waste that enters landfills in the United States comes from structural materials, either demolition or the debris of new construction.”

“It has a multiple effect on both reducing the demand for raw materials to build new structures and maximizing the use of existing resources,” LaMore said. “And then you’re bringing people into more dense living environments, which are much more sustainable and have less greenhouse impacts.”

“With demolition accounting for 90% of the total construction debris, adaptive reuse is a more environmentally-friendly option that can also help satiate the growing need for housing,” Nuculae said.

LaMore said the increasing adaptive reuse isn’t surprising because of the  increasing cost of materials, fewer people wanting to live in suburbs and the declining need for commercial space.

“We’re seeing for office space and commercial retail space, there’s been a lagging decline in demand, so there’s an excess of those spaces available,” LaMore said. “At the same time we’re seeing a high demand for residential apartments.”

In Michigan, Lansing leads the adaptive reuse trend with 289 apartments converted between 2020 and 2021. Detroit comes in second, with 197 apartment conversions, the report said .

For future conversions, the report found Grand Rapids and Detroit to have the most potential for adaptive reuse, coming in 7th and 10th respectively in the country.

And LaMore and Nuculae agree that the trend is likely to continue.

‘I think there’s a growing awareness among the development community that the conversion of a property is generally cheaper than actual new construction of a building,’ LaMore said.

One business owner in Detroit turned a rundown 1920s bank vault into a thriving speakeasy.

The old architecture offered a unique ambience and historic character that is hard to replicate with new construction, said Tarun Kaejeepeta, owner of Shelby.

“From our perspective, we really were excited for this opportunity to bring it back to life,” he said. “In a city like Detroit, where you have so many vacant buildings, it just seems more impactful and productive to be trying to bring those buildings back to life rather than just trying to build new things.” 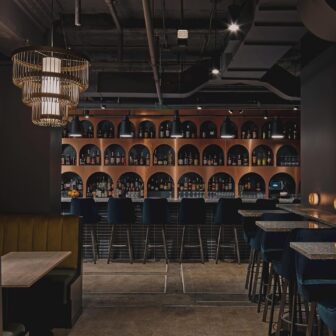 Shelby, in downtown Detroit, was converted from a bank vault to a speakeasy. Image: Sonali Patel

Conserving a community’s heritage is a primary motivation of adaptive reuse, Nuculae said.

“Adaptive reuse seems to be the perfect crossroad between the past and the future by maintaining the passing on of heritage while also fulfilling contemporary needs,” she said.

Ending the construction mindset is the next step in furthering adaptive reuse, LaMore said.

“End this paradigm of build it, use it and throw it away, and make a more circular built environment paradigm.”