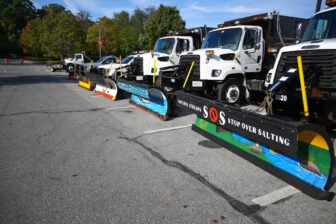 Salt Watch partnered with the Gaithersburg Parks, Arts and Recreation Complex with “Paint the Plow,” a project to raise road salt awareness across the city. Image: G-PARC

Volunteers in Gaithersburg, Maryland, are fighting road salt pollution with catchy sayings painted on the blades of snowplows.

The group is located in the hometown of the Izaak Walton League, a national environmental conservancy that created a nationwide program to monitor chloride levels and advocate to reduce the use of road salt. They have recorded high chloride readings in cities across the Midwest and the Northeast, with the highest concentrations in Michigan.

Road salt contains chloride, a toxic compound that dissolves in water. When it is applied to icy surfaces in the winter, it can drain into streams and lakes.

Michigan’s high levels are due to a combination of factors, said Samantha Briggs, the program’s director.

The Metro Detroit area has a lot of paved surfaces that increase water runoff, Briggs said. “The salt has nowhere else to go.” 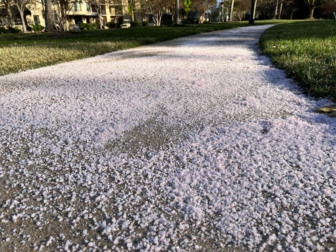 Salt Watch’s data set is limited, and many volunteers have submitted readings from Michigan. It may only appear the state has the worst chloride problem, according to Briggs. “We have a lot of information from Michigan in particular…we’re always looking to expand.”

Salt Watch has a number of partner organizations in Michigan, including the Outdoor Discovery Center. The Holland conservancy group is prioritizing the issue along the state’s west coast.

Outdoor Discovery Center’s Watershed Manager, Kelly Goward, has been monitoring salt levels in lakes and streams near Holland over the past couple years. The concentration of one local stream measured 290 parts per million in November, which is considered toxic.

Measurements from a 2021 study show that Lake Michigan’s salt content has risen up to fifteen times its natural level since the 1800s, but the effects of these high levels are only now being understood.

“It’s one of these things people have been focusing on recently,” Goward said.

The salt watch program was created because of rising concern for salt’s effect on ecosystems across the country. “Salt can desecrate the environment,” said Abby Hileman, the Salt Watch coordinator.

Chloride can kill macroinvertebrates and affect natural processes such as seasonal lake turnover. It is also difficult to filter from drinking water and it corrodes metal pipes, potentially exposing heavy metals like lead.

“Once salt is in the environment, it never leaves,” Hileman said. “It could cause something like the Flint water crisis.”

Outdoor Discovery Center is looking for solutions, but they understand there needs to be a balance between keeping waterways clean and winter roads safe.

“We need to ask ourselves what scale is appropriate to melt ice,” Goward said.

The group encourages municipalities to cut down on road salt, and to put it down only where needed.

Alternatives are also considered across the Great Lakes region, Goward said. One popular alternative is salt brine, a liquefied form of road salt with less chloride that acts faster.

“Most alternatives aren’t really realistic,” Goward said. Brine, calcium chloride and even beet juice are proposed to deice roads, but they cost more to store and purchase compared to road salt.

“We want people taking ownership of their ecosystem, we want them to say, ‘this is my stream’,” Hileman said.

Salt Watch has encouraged volunteers to call for a reduction in road salt use, and some have helped make changes on a legislative level.

“I want my job to be obsolete,” Briggs said.