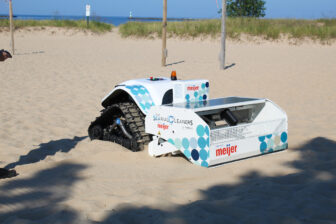 The beaches of Lake Erie will be occupied by more than people this spring as plastic cleaning robots BeBot and PixieDrone help clean up the Great Lakes.

The remote controlled BeBot sifts through the sand to collect plastic waste up to one-inch deep. It is 100% solar-powered.

The PixieDrone is a floating waste collector, also remote controlled, and can collect up to 42 gallons of plastic, according to The Searial Cleaners, a manufacturer of green technologies dedicated to collecting trash on the shore before it goes too far into waterways.

“We don’t believe there is a one-solution-fits-all, said Claire Touvier, the Searial Cleaners director. “That’s why we grew a range of technologies because we know there are a variety of different sites and conditions.”

Awareness of plastic pollution has been focused on the oceans, especially in massive garbage patches. The Council of the Great Lakes Region, a non-profit binational network, discovered alarming statistics, said Ally Walker, that organization’s program officer.

“As much as 22 million pounds of plastic could be entering the Great Lakes annually,” Walker said.

The robots were deployed as part of the Great Lakes Plastic Cleanup Initiative, an effort that began in 2020 and is led by the council and Pollution Probe. 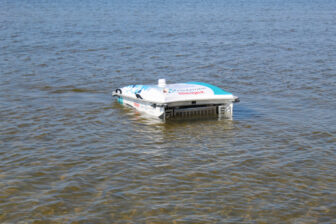 Both devices were funded by a $1 million donation from the Meijer grocery chain. The National Oceanic Atmospheric Administration has also helped the council deploy other technology that filters and separates pollutants from waterways.

The donation helped purchase and deploy the technology and supports the Council of the Great Lakes Region partners to carry out litter clean-ups and waste characterization activities from April to October, Walker said.

Additional studies from partners of the Council of the Great Lakes Region found the concentration of microplastics on the surface of the water as high as about 483,000 particles per square mile, she said. That is on par with what is found in the ocean’s garbage patches.

The council has an infographic from the University of Toronto Trash Team that shows plastic pollution hot spot  and pieces of plastic collected per county or district.

The BeBots and Pixedrones will be deployed to Olander Park near Toledo, and then Hinckley Reservation, North Coast Harbor, Fairport Harbor Beach of the Cleveland area.

The Council of the Great Lakes Region is working with four partners that have one BeBot and PixieDrone each. They will be deployed to 18 sites, Walker said.

The PixieDrone can collect smaller pieces of plastic from further out in the water, which can be harder for people to capture even if they have a boat, Walker said.

The BeBot carries up to 26 gallons of litter, Touvier said. It digs into the sand and sifts for smaller pieces of plastic that people might not see.

It digs only one inch to avoid causing the shoreline to erode.

Both robots can be more effective than people for collecting small plastic materials from hard-to-reach waste, Walker said. “That’s not to say that they replace volunteers.” 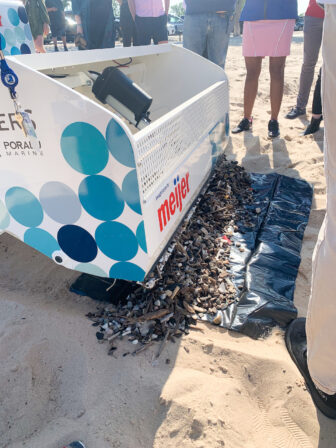 In addition to plastic being pulled from the shorelines, Walker said that businesses and other groups also need to implement policies that are circular economy friendly and where less plastic waste is being generated.

“We can only pull so much out of the Great Lakes without making a change to the systems that are putting the plastics in the Great Lakes in the first place,” Walker said.