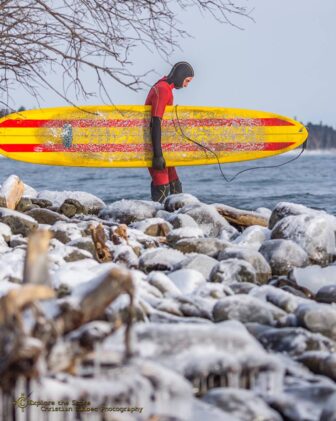 Waves are gnarly across the Great Lakes this weekend.

On Christmas Eve, up to 20-foot waves are expected on all five of the Great Lakes. The National Oceanic and Atmospheric Administration warns of high winds, big waves and freezing spray across all coastlines.

Alija Bos, a Lake Ontario surfer, is heading out to catch some Santa swells on Christmas Day near Kingston, Ontario.

“I don’t want to jinx it, but they (the waves) are looking pretty wild,” he said. “A significant temperature drop is expected as a high pressure system moves into the Great Lakes.” 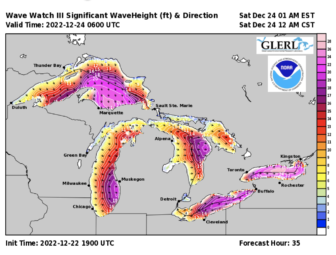 Aaron Renzelmann, a Lake Michigan surfer from Sheboygan, Wisconsin, agreed: “It’s going to be wild all around, with wave sizes, winds, temperatures and snow conditions,” he said.

He’ll be surfing in Sheboygan, called by local surfers the “Malibu of the Midwest” and freshwater surfing capital of the world.

Winter allows for the best surfing conditions along the Great Lakes, Renzelmann said.

“The winds are much stronger in the winter months,” said Joseph Ackerman, a professor of physical ecology and aquatic science at the University of Guelph in Ontario.

And they are much stronger more recently due to global warming and with consequences other than better surfing.

Increasing Great Lakes winds and wave power from climate change are disrupting normal conditions leading to decreased water quality, coastal erosion, harmful algal blooms and unpredictable behavior of waves in Lake Erie according to a 2021 study published in Nature and co-authored by Ackerman.

This weekend’s waves may be a highlight, but the waves have been consistently good for surfing across the Great Lakes all year. 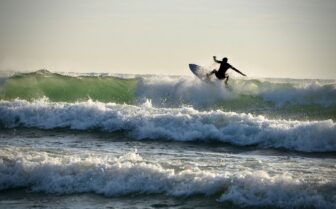 These waves “could be a positive outcome of climate change,” said Bill Selbig, a research hydrologist for the United States Geological Survey.

From a surfing perspective, Erik Wilkie, a longtime Minnesota surfer, is reaping the benefits of climate change on Lake Superior.

“What we’ve noticed in relation to the climate change, is much less ice cover in the winter time, allowing us to surf all winter,” he said. 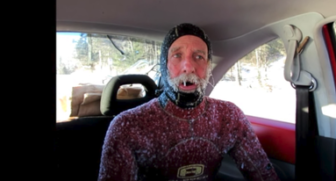 “I suspect over my lifetime this will have a more pronounced effect on the Great Lakes surfing opportunities,” he said.

The question for surfers: Will surfing get better as the climate warms?

“With more solar energy input, there’s more potential for winds,” Ackerman said. “And of course when winds blow for a long time in a given direction, they’ll produce bigger waves.”

Ackerman and Selbig agree that the wave systems are complicated. Selbig says the bigger waves from increased energy in the system may correlate with climate change, but aren’t necessarily be caused by it.

But Great Lakes surfers? They’re not concerned this weekend wh 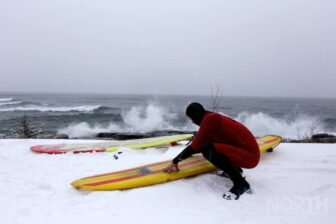 ether climate and waves are causation or correlation.

They just know that the surf’s up for a holiday celebration.

For Wilkie, this weekend’s festivities include a frosty Lake Superior surf.

“I’ll be surfing for a while, warming up, thawing the ice out and going back out after a peanut butter sandwich.”

It’s not just about  the waves, he said.

“The coldest waters make for the warmest friends.”