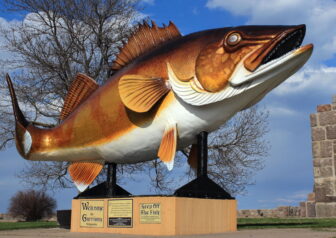 Garrison, Minnesota, is home to a giant walleye statue sitting on the shore of Mille Lacs, a popular walleye fishing lake. Image: City of Garrison.

Walleye. A top predator fish with a cult-like following in the Great Lakes.

Paul Radomski’s new book Walleye: A Beautiful Fish of the Dark (University of Minnesota Press, $24.95) details the biology, management and importance of this iconic fish.

Radomski, a fisheries biologist by trade, said he hopes readers will take away a greater appreciation for walleye as they learn more about it. 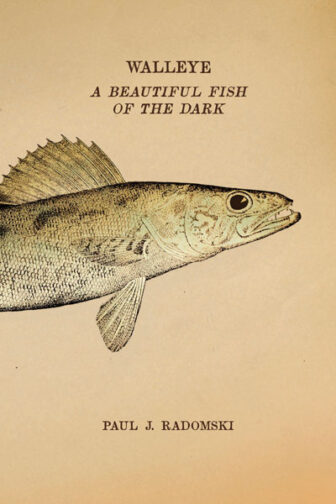 Walleye: A Beautiful Fish of the Dark cover. Image: University of Minnesota Press.

“How do they live, what is their habitat, why do they flourish, what are their challenges to survive?” Radomski said. “I know a lot of people fish for walleye, but sometimes it’s good to be curious about those details.”

Radomski said his inspiration for the book goes back to his childhood. He grew up fishing the Wisconsin River near Stevens Point, Wisconsin, and said that’s where he fell in love with walleye.

“The more you’re exposed to something, the more you come to appreciate or love it,” Radomski said. “I fell into great fascination with walleye, even to just understand the basic things about them.”

He decided to study fisheries so he could get paid to study the fish he loves.

Radomski has been working as a fisheries biologist for over 30 years and said it seemed like writing a book was a great way to relate some of his experiences to facts about walleye.

Spanning over 200 pages, the book is split into three parts. The sections explore the biology and management of the fish and include case studies about people coming together to try to conserve the species.

Radomski said he originally never planned to write a book about walleye. After completing a book on lake ecology and development with a colleague, an editor at the University of Minnesota Press asked to meet with him.

“He said, ‘We have a really good book on northern pike, but we don’t have a walleye book,’” according to Radomski. “I said, ‘You don’t, and you should.’ Then he asked me to write it.”

Radomski said he wrote it pretty quickly because it’s a fish he enjoys talking about.

“When people ask you to do something, sometimes it pays just to say yes,” Radomski. “I probably would’ve regretted it if I didn’t take him up on the offer.”

He said the title was originally just a placeholder, but it stuck with the publisher.

“The biology of walleye is really fascinating from the adaptation of its eye,” Radomski said. “It’s adapted to see in low light conditions and that’s where it’s most active. I saw the beauty in a simple attribute of this fish.”

To anyone who has seen a walleye, the eyes certainly stick out, and they’re the key to describing many of its behaviors, according to Radomski.

In the Great Lakes, it’s hard to have not seen a walleye. Whether it’s through fishing, driving past a statue or reading a menu, the fish is an integral part of the area’s culture.

An analysis by the Washington Post claims that walleye is the most Midwestern thing on Earth.

Radomski mentioned reading that article while explaining the craze people experience from them.

However, he said he was surprised by the audience for his book. He had imagined that readers would primarily be anglers who already love the fish, but saw the audience is much wider after attending a recent book event.

“The audience was dominated by women who weren’t anglers but were really interested in nature or understanding the walleye they eat in the restaurant,” Radomski said.

Regardless of the audience demographics, Radomski said he hopes readers understand why and how to work together to ensure an enduring future for walleye.

“I want people to understand that many of our actions have consequences on the things we enjoy, like fishing for walleye,” Radomski said. “It’s happening now.”

But there is a path forward, centered on working together to protect walleye habitat, Radomski said.

“We can enjoy walleye fishing, but we should give back something to walleye,” he said.