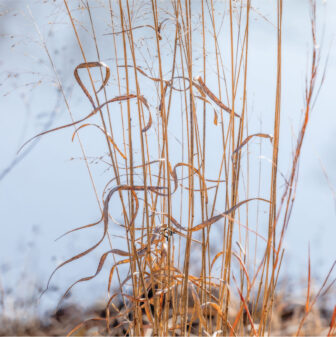 This year, Morton Arboretum 25 miles west of Chicago, is celebrating 100 years – and photographer Peter Vagt has over 20 years’ worth of photos to show for it.

Vagt, the author of the newly published book “Light Through the Trees: Photographs at The Morton Arboretum” (3 Fields Books, $29.95) shares 84 of his greatest photos captured at Morton Arboretum since 1999.

Growing up in Minnesota, Vagt was always surrounded by nature, with only a five-minute walk to nearby lakes and woodlands, so it’s no surprise that nature was his favorite topic to photograph. 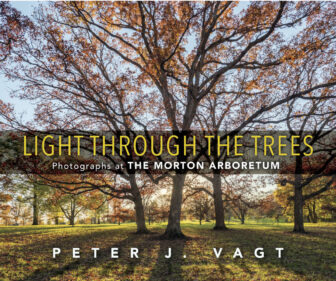 Cover of “Light Through the Trees” Image: 3 Fields Books

One of his earliest memories of photography was sitting with his uncle atop rocks overlooking Lake Superior during a lightning storm.

Since then, Vagt always has a camera at his side.

Vagt went to college in Chicago and found that life as a nature photographer was not as easy there as in Minnesota.

“I was dismayed and could walk for hours, and there was a never-ending sight of houses and urban life. I couldn’t get away to nature,” he said.

Vagt majored in geology, specialized in groundwater and went on to pursue a career as an environmental scientist doing groundwater clean ups at sites all around the Midwest and East Coast while still taking photos.

With the stress that college brings, Vagt was pushed to find a spot he could “escape” to, and with that he discovered the arboretum, only a 15-minute bike ride away from his apartment.

Morton Arboretum, located in Lisle, Illinois, quickly became his favorite place for two reasons: “It is a tended garden, (with) carefully kept paths with a collection of trees from all over the world, and it was nearby and I knew it very well,” said Vagt.

Paul Caponigro has always been one of Vagt’s photography heroes, and Vagt felt he could mimic his style of photography.

In 1999, Vagt decided to take on a project of trying to capture pictures in the arboretum that depicted what it felt like for him to be there. “For me, that was relaxation, rejuvenation, excitement.”

So, Vagt spent the next 20 years visiting the arboretum every week, sometimes every day for weeks, to capture what it felt like to wander through his favorite escape destination.

“I found that my best pictures didn’t come from following the rules of composition,” said Vagt.
“It came from finding just the right location to have my camera point in the right direction.”

“If I found one of those spots where everything was balanced and there weren’t extra tree branches, I would go back to when the light was different to see how that spot was magical at a different time,” said Vagt.

Vagt made certain to capture photos of Morton Arboretum in all four seasons. However, that doesn’t mean he didn’t have a most-favorite and least-favorite season to explore in.

“My least-favorite time of year is summer because everything is green, so the picture is very monochrome,” said Vagt.

Vagt described two of his favorite times of the year as “the beginning of fall, the first color, when every single leaf seems to be a different color from other leaves, and the last week of October when over half the leaves are down., I find that much more interesting to work with because you can see through the trees, and the leaves stand out by themselves.”

As picturesque as that may sound, photographing the same place for so many years comes with its challenges, one of them being people.

Vagt said more than 1 million people visit the arboretum every year, and capturing content of only nature wasn’t always easy.

Vagt also found it challenging to capture a “really good picture. You can get a nice picture, but it’s hard to get a great picture.”

One of those great pictures – number 14 in his book – was captured when he least expected it. Strolling through the arboretum on a rainy fall afternoon during his daughter’s final drawing class presentation, he randomly stopped to photograph a tree.

“At the time I didn’t notice how you could see the rain as a haziness in the distance. The rain made it an entirely different look to the scene,” said Vagt.

Besides celebrating the arboretum’s centennial, Vagt had other motives for creating his book.

One of them was emphasizing the importance of getting out into nature and a second was encouraging others to take lots of pictures.

Vagt recognized that he felt strong emotions in certain places at the arboretum, and he let those drive his photography and get past the “desire to logically compose a picture because when you follow the rules, pictures aren’t magical.”

Vagt said he wanted to create a guidebook for people on how to improve their photos and to show what it feels like to be in a certain place.

“I don’t have a vibe yet with this part of the country,” he said, “so I am teaching myself to learn how to take pictures in much more hilly places.”

From the first photo of his arboretum project (#10) to the last (#79), and every photo in between, Vagt seeks to continue to inspire through photography.

“I hope to encourage people to both get out and enjoy nature more, but to take better pictures and be patient,” said Vagt.