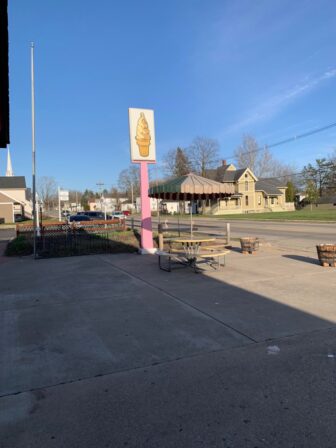 My favorite summertime activity has always been biking or walking to the best ice cream shop in Lowell, Michigan: Ball’s Softee Creme.

Situated at the end of town by the Flat River, Ball’s Softee Creme is the perfect place to grab an ice cream cone with friends during the summer months.

You can get anything your heart desires at Ball’s — the best pulled pork sandwich ever, a glacier, which is half slushie-half vanilla ice cream, the largest plate of bean and chili cheese nachos you can imagine and a simple chocolate-vanilla ice cream twist in a cake cone.

Ball’s Softee Creme is the oldest ice cream shop in Lowell, celebrating its 51st year of operation in 2022. Many generations have enjoyed its sweet treats.

Now, I mentioned global warming in the title of this commentary.

Ball’s Softee Creme has nothing to do with global warming, of course, but it is benefitting from it.

The last eight years were the hottest ever recorded, according to a report by the World Meteorological Organization.

The small, family-owned shop is open only in the warm season, and because of global warming, that season is rapidly lengthening.

In 2022, Ball’s opened for business on April 2 to celebrate another year. In 2020, it opened on March 11 and stayed open into September.

March 11 is over two months earlier than its opening day in the first years of operation, which hovered around Memorial Day.

Believe me, I love this little ice cream shop, so I can’t complain that it’s opening its windows earlier and keeping them open later in the year.

But I can’t stop thinking about climate change.

Lowell sits at the intersection of the Flat River and Grand River, so it’s no surprise that much of the community is a floodplain.

2013 brought one of the largest floods Lowell has ever seen, caused by days of constant, heavy rain.

Lowell isn’t the only place experiencing heavier rains though.

A study by researchers at Northwestern University compared rainfall from two periods — 1951 to 1980, and 1991 to 2020 — and found that climate change is causing rains to be heavier in the United States.

The central and eastern parts of the lower 48 states are experiencing the most extreme rainfalls, and Lowell is at the center of it all.

Lowell wasn’t spared then, and record-breaking floods are still occurring each year. 2018 brought the fourth-largest flood Lowell has ever experienced, just shy of the 2013 flood level. 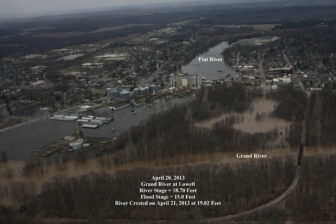 I remember my mom packing my brother and me up into the car to drive as far as we could into town to check out the damage. We sat in silence as we passed through downtown and parked by the city hall.

We saw our friends, our neighbors, our community members kayaking and canoeing down the streets because they couldn’t drive anywhere.

A local company, Timpson Trucking, donated sand from its sand mine to help residents fill sandbags.

There were sandbags stacked around homes and businesses, cars trapped under the murky water and paramedics, cops and firefighters on call.

Ball’s Softee Creme even had sandbags up to protect its shop about half a mile from the rising river.

So there I sat on that mild April day, wondering how my community would recover from this.

And now I sit, eating my melty chocolate cheesecake flurry, wondering how my community is going to recover from global warming.