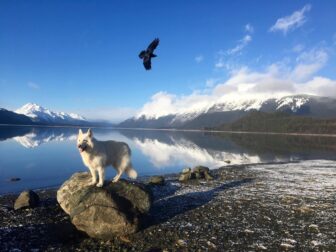 A moment of stillness during Tor and the raven’s playtime, just outside of Alaska’s Glacier Bay National Park. Image: Tracy Mikowski.

You know that old saying about friendship being the greatest gift life has to offer?

Well, it’s not only applicable to humans. A dog and a raven fostered a friendship that spanned eight years, and a children’s book just came out that details the improbable friendship. 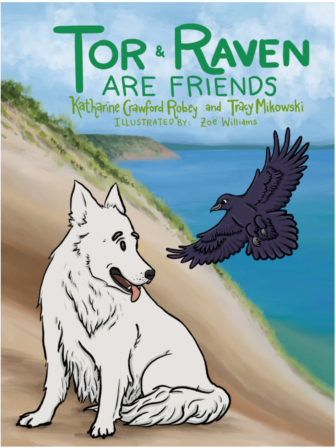 It all began when a pair of ravens nested near Mikowski’s home in Haines, Alaska. Not long after, her fluffy white king shepherd, Tor, befriended one of the ravens. The tasty treats Tor earned after posing for pictures on beach walks is what initially interested the birds, Mikowski said.

“The ravens picked up on that. They started following us and would actually pose in different places and get a treat as well,” she said.

Before long, one raven would fly close to Tor and over him, playfully pouncing on his behind. They’d play in the snow together and just be silly, Mikowski said.

Over the eight years of Tor and Raven’s friendship, they spent part of nearly every day together. Mikowski even learned to distinguish the call of Tor’s raven versus that of the others.

Eventually, Mikowski felt she ought to share this story.

The biggest question was how.

Here’s where children’s book author Katharine Crawford Robey comes in. Mikowski was familiar with Robey’s books, and felt that a children’s book might be a great vehicle for telling the story of Tor and Raven.

So one day, she cold emailed Robey and told her the story.

“I was so pleased when she said she wanted to know more,” Mikowski said.

Robey and Mikowski ended up writing the book over phone calls and emails. Robey crafted the whimsical story, as Mikowski puts it, and Mikowski edited it.

“She was probably the best editor I’ve ever had,” said Robey. “Without changing my voice, she was able to clarify things.”

Although the real-life friendship existed in Alaska, Robey thought it would be best to base the book in northern Michigan.

“I’ve always loved it here. It’s so beautiful with the beaches, the stones, the birds,” said Robey. “I wanted it to be set mainly here.”

For part of the year, Robey lives in Empire with a stunning view of the Sleeping Bear Dunes from her window. Mikowski grew up in the area, and her family first homesteaded in Leelanau County in the 1880s.

“I feel a deep connection and roots here in this area as well,” Mikowski said.

The book still has ties to Alaska, though. At the beginning of the book, a great westward wind blows Raven from Glacier Bay National Park in Alaska to Tor’s cabin in northern Michigan.

Like anyone meeting for the first time, the animals are initially hesitant of one another. Tor is a fluffy, four-legged dog, while Raven is feathered and flies. But it didn’t take long for them to become friends. 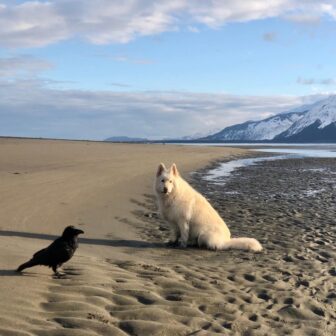 Tor and the raven posing on the beach in Haines, Alaska, likely for a treat. Image: Tracy Mikowski.

Throughout their play and adventures, Tor observes things about friendship, things that the authors hope both children and adults will take away from their book.

“People should cherish friendship and make friends with people, no matter what they look like or where they come from,” Robey said.

In the book, Tor and Raven grow closer as they somersault down the famous dune climb at Sleeping Bear, picnic at the mouth of the Platte River, play at Fishtown Leland and enjoy the Empire Bluff hike that overlooks the Sleeping Bear lakeshore.

“It’s really a souvenir of the area, to be able to take it home and be like, ‘Oh yeah! I was there!’” Robey said.

“Illustrations are so important for a children’s book. It’s really what initially sells it, I’d say,” Robey said.

On Nov. 12, the three contributors hosted a book launch event at Horizon Books in downtown Traverse City. Folks of all ages came to listen to Robey read the book and watch Williams’s digital art demonstration. At the end, they gave a Petoskey stone and heart-shaped stone from Alaska – stones that Tor and Raven exchange in the book when they have to part – to two lucky winners.

“The little blond girl who got the heart stone was so pleased with her gift, it was worth the whole day to see her smiling face,” Mikowski said.

After Tor died in October, having spent his last year in northern Michigan, Mikowski said that the event and the book feel like a way for her dog’s special spirit to live on and be shared. 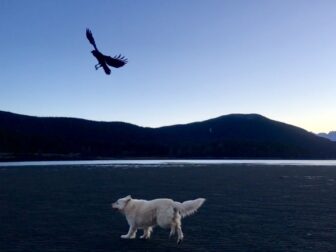 The beach in Alaska Mikowski usually walks at is covered with heart shaped rocks that finds to be excellent gifts for loved ones. Image: Tracy Mikowski.

Plus, she’s hopeful there might be more adventures for Tor and Raven in the future. For now, she’s helping Robey with a work-in-progress picture book called “Little Rabbit and the Moon.”

Robey, Mikowski and Williams appreciate their new friendship, and just gathered in-person for the first time the day before the book launch. They hope their story – and of course, Tor and Raven’s – will inspire and reinforce the beauty of friendship.

“It’s worth taking a chance on friendship to make it lasting,” Robey said. “And to realize that a friend does have to leave but that they will come back, if at all possible, is so profound.

“Youngsters need to understand that.”