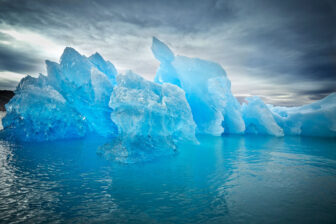 “I have the world’s largest collection of seashells. I keep it on all the beaches of the world… perhaps you’ve seen it.” – Steven Wright

We have museums for all kinds of beautiful or interesting things – paintings, gems, music, archaeological artifacts; here in Ann Arbor, we even have a museum of old and uncomfortable-looking dental devices. Often, these museums have special facilities to accommodate their special subjects. Temperature, humidity, and light are carefully controlled, objects may be displayed on archival acid-free paper, and so on.

So when we were thinking about a new museum devoted to one of the most beautiful and interesting things on our planet – ice – we had to think hard about how best to display and preserve this delicate substance. Obviously, the museum would have to kept cold, so first we thought about a big walk-in freezer. Then we realized that we’d have to lend coats, boots, and mittens to all of our visitors, and provide bright light to really show off the spectacular beauty of ice. Everything seemed so complicated that we were about to give up when we had a brilliant idea – not a walk-in frozen museum, but a walk-out frozen museum.

So welcome to the Museum of Ice, Michigan’s largest museum, open daily (weather permitting) between December and March. Just step outside anywhere in the state and you’re in the museum.

You’ll see ponds and lakes covered in beautiful black ice, as transparent as glass, through which you may see underwater plants, insects, or even a fish. Search for imperfections in the ice – bubbles trapped in mid-flight, leaves frozen into the ice, black “ice-spiders”. Have one of our docents chip out a chunk of black ice for you, so that you can appreciate its diamond brightness. 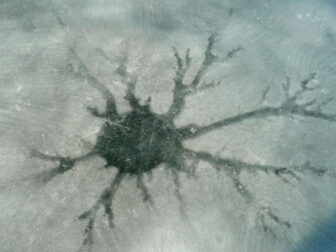 An ice spider (also called lake stars or octopi). From the Lake Ice website, a great source of information for ice enthusiasts.

Maybe you’ll see some blue ice. Ice is optically similar to liquid water – in small pieces (like an ice cube), it looks clear, but if you see a thick piece that is free of air bubbles and snow, it’s as blue as a lake on a summer’s day. The best place to see blue ice is in a glacier or iceberg (which we don’t have in our current collection at the Museum), but the ice in Lake Michigan’s ice caves, or the thick chunks of ice piled up on the shores of the Great Lakes may look distinctly blue.

If you’re feeling adventurous, bundle up and go down to a fast-moving stream the morning after a clear, frigid night to see frazil ice. A lot of people think that moving water doesn’t freeze, but even fast-moving water freezes if it gets cold enough. After a bitter cold night, the streamwater will be steaming, and long needles and feathers of ice (“frazil ice”) will be crystalizing all through the water. These crystals are sticky, and pile up on stones and logs, instead of forming a solid skim on the water’s surface.

If you’re not feeling that adventurous, check out the frost around your home. Especially after cold, clear nights, you’ll see lovely silvery fingers of frost on your windows and delicately encrusted on twigs.

Don’t forget to visit the exhibit on the Sounds of Ice. Here, you can hear the common, everyday sounds of ice – the sharp crackling of breaking skim ice, and the crunching of cold snow underfoot beneath a dark, starlit sky. But there are rarer and more exotic sounds. When the ice covering a lake expands and contacts, it booms and groans, the ice sheet acting as the soundboard of an immense musical instrument. If you’re really lucky, you might hear the restless chiming of ice washing in the surf of the Great Lakes, or the rhythmic singing of waves running up under a thin ice margin. Keep your ears open when visiting the Museum!

Ice is dangerous as well as beautiful, and the deadly side of ice is also on display in the Museum. Ice-covered lakes and streams can be treacherous. The usual advice is that sound black ice three or four inches thick is safe to walk on, but when the ice is white – slushy or snowy, all bets are off. Late-season ice forms long vertical crystals the size and shape of a pencils or candles. This “candled” ice easily breaks along the junctions between the crystals, so it has no strength and is very dangerous. I once chopped through 18 inches of candled ice with just three strokes of an ice spud before retreating carefully to a safer place. The ice on rivers and streams is unreliable too, because its thickness can change from a foot to an inch in a single step. 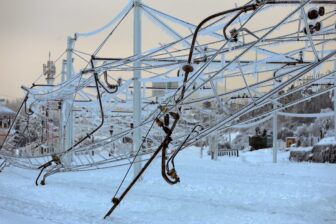 You don’t have to go out onto a lake or river to be exposed to the dangers of ice. The other kind of “black ice”, the nearly invisible coating of ice on road surfaces resulting from the freezing of light rain or the moisture in the pavement or vehicle exhaust, causes traffic accidents and deaths every winter. Freezing rain produces perhaps the most beautiful and damaging form of ice, glazing every surface with a glittering and impossibly slippery coat. The weight of this ice can tear down branches, trees and power lines, and take down the electrical grid for days or even weeks. Freezing rain is so slippery that driving or even walking can be close to impossible.

So be careful when you visit the Museum of Ice this winter. But do visit, because ice in all of its forms is worth seeing. And here’s a bonus – no matter where you live in Michigan, this museum is just around the corner.