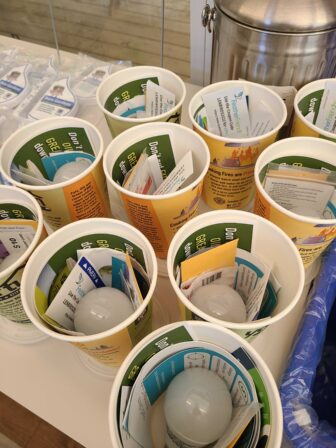 The average London, Ontario, household wastes 2.81 kg (6 pounds) of food each week, and local communities and nonprofits are looking for solutions to the problem.

The goal is to avoid food waste and dispose of organic materials properly to save space at landfills and reduce methane emissions, they say

She is a lecturer and Ph.D. candidate at the university’s Department of Geography and Environment.

On scheduled dates, researchers picked up the trash in their vehicle, took it to a facility and manually sorted out all waste samples. In Everitt’s words, that was “digging through the trash and measuring these things and what’s actually being thrown away.”

For Everitt, the most stand-out trash was unopened food, “like a pack of cookies, or candy or something that’s completely sealed.”

She added, “And for someone who likes desserts and also does not like to waste food, it’s just very hard to wrap my head around why someone chose to throw that food item away when it hasn’t been open (and) there’s nothing wrong with it instead of eating it or gifting it to someone or putting it out for guests when you have people over.”

She also noted that people threw away full fruits and vegetables.

“When you have just a carrot in the garbage, it might be beside a hairball and a Kleenex and it looks a little bit grosser compared to seeing a bunch of cookies that are in a perfectly airtight sealed container.

“But it’s the same idea, right, where someone has bought some sort of food, not even attempted to eat it and then ended up throwing it away,” she said.

Approximately half the food waste examined for the study was classified as avoidable, such as milk, bread and apples, according to the researchers. The other half was considered unavoidable, such as bones, eggshells, pits and coffee grounds. 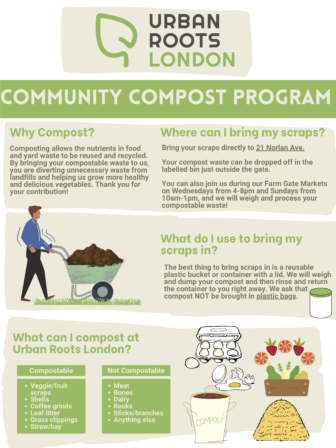 To reduce the impact of food waste and organic material, some Canadian cities have implemented a Green Bin program. For example, Toronto started its program in 2002 and now collects organics from 460,000 households and composts it.

London’s plan to launch the program has been postponed until 2023.

“The program was supposed to be implemented a little while ago, but COVID has delayed the implementation due to supply chain issues,” Everitt said.

However, having a program such as a Green Bin is not enough.

Everitt said research shows that with such programs, some people tend to throw away more food.

“Without proper knowledge and education about the general waste management system, some folks have been shown to think that wasting food is no longer as bad because it’s not going to landfill, it’s not being incinerated, it’s being composted.”

She added, “That’s why I think having education in conjunction with the implementation of these diversion programs is really important.”

The Urban Roots London farm accepts organic waste from Londoners and grows local produce. Growing Chiefs! Ontario educates children about food systems, and the Grove developed the Wormery project that recycles organics into nutrient-dense compost with the help of worms.

Another organization, London Environmental Network, works with around 50 nonprofits, to help them find funding.

It also runs its own projects, such as green infrastructure development and a FOG cup (fat, oil and grease) project, said Jamie Dardarian, the residential sustainability and energy coordinator at the London Environmental Network. 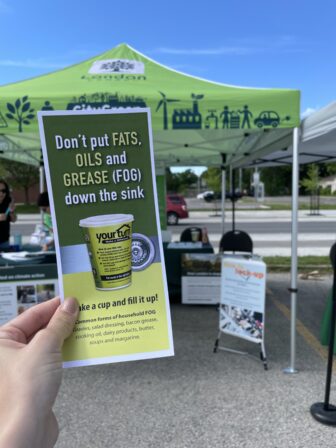 They can bring them to the city’s EnviroDepots, Dardarian said, where the fats are consumed by bacteria that produce methane, which is used to generate electricity later.

That’s a beneficial alternative to flushing grease down the toilet or sink, clogging sewer lines and damaging pipes at a cost thousands of dollars while polluting local rivers, Dardarian said.

On an individual level, people can compost food waste in their backyard, use countertop composters or composters with worms, said Karen Wirsig, the plastics program manager at Environmental Defence, a nonprofit advocacy group based in Toronto.

To prevent food waste, Wirsig advises shopping more often and for fewer items if a market is nearby.

“If you realize you bought too much and you can manage it, try to cook and preserve the food and then freeze it for a later time. Make a sauce out of it. If you’ve bought too much food, share it with your neighbors,” Wirsig said.

Everitt advises consumers to learn more about proper storage of food, such as proper refrigerator temperatures and ways to prolong the life of produce.

“I like to buy a lot of celery, and if you store celery in water, it prevents the celery from getting flimsy really quickly,” she said.

To learn more about how to store foods, visit the Love Food, Hate Waste project.