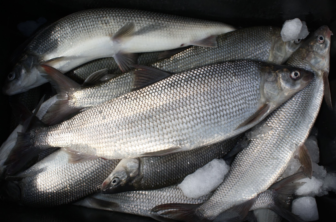 Whitefish in the Great Lakes region could offer more than just filets.

The fish could be used for makeup, wallets and supplements.

That could happen as a result of the “100% Whitefish” campaign spearheaded by the Conference of Great Lakes St. Lawrence Governors and Premiers, a coalition of state and provincial leaders from around the region.

The campaign is pushing for commercial fisheries to use more than just the filets, said David Naftzger, the organization’s executive director.

Using whitefish for more than food isn’t a new idea.

Fisheries in the region have been using fish guts and carcasses for fertilizer and their Y-bones for sausage, said Charles Henriksen, who has owned and operated Henriksen Fisheries in Ellison Bay, Door County, Wisconsin, for over 30 years. The company sells whitefish at retail and wholesale. 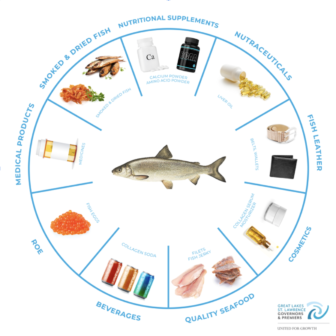 The organization is working with Matís, an Icelandic research and consulting company, to get the ball rolling on the campaign.

Naftzger said, “We shipped frozen whitefish from the Great Lakes to Matís so we can better understand, ‘What is the whitefish relatively good at?’”

Testing found that in addition to high protein levels, whitefish skin and scales have lots of collagen, which can be used in products like makeup, Naftzger said.

A similar project was done in Iceland with Icelandic cod.

By using almost 100% of the fish, the value of a single cod rose from $13 to $3,500, according to the governors’ and premiers’ organization.

The organization settled on whitefish as the target for the campaign for a few reasons, Naftzger said.

They’re caught primarily through commercial fishing, meaning there’s an existing infrastructure for their harvest, as well as a lot of fish available for processing, Naftzger said.

Because whitefish live throughout the Great Lakes region, the campaign can target many states, provinces and fisheries.

Naftzger and the organization haven’t turned down the idea of looking at other types of fish in the future for similar campaigns, though they’re hesitant to target invasive species because they don’t want to create an economy around something many want removed from the Great Lakes, Naftzger said.

Since whitefish harvesting is largely done commercially, governments set caps on how much fish can be caught to combat overfishing, said Tammy Newcomb, the co-chair of the scientific advisory team at the Great Lakes Fishery Trust.

Maintaining a balance is essential to ensure the health of the ecosystem whitefish live in, said Saleh Mamun, a postdoctoral associate with the University of Minnesota Duluth’s Natural Resources Research Institute.

Newcomb said whitefish populations have been declining recently and the campaign could be a way to increase the sustainability of fisheries.

The campaign is funded by the Great Lakes Fishery Trust. Formed in 1996 and headquartered in Lansing, Michigan, it assists utility companies in preventing fish loss due to their water use, in addition to funding public grants.

Naftzger and the organization received nearly $160,000 for the campaign from the trust.

The campaign’s next step is hosting an innovation competition to spur further ideas about how to use whitefish, according to Naftzger.