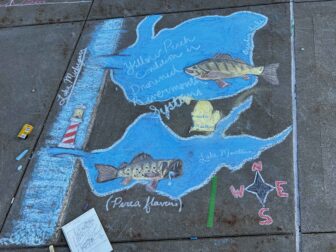 Yingling’s chalk mural depicts what he studies: yellow perch in drowned rivermouth systems. Through the data Yingling collected for the university’s Annis Water Resources Institute, he discovered that the average weight and health of fish captured at Lake Macatawa is significantly below standard levels.

His artwork was part of Grand Valley’s Chalk Art Symposium in September, where dozens of students showcased their work on the Pew Library plaza.

“This was my first time doing something like this,” Yingling said. He loves drawing landscapes in his free time, and was excited to be a part of the event.

Combining science with artwork allowed people to see his research who wouldn’t have otherwise, said Yingling. “I believe science is really for everyone.”

Attendees approached Yingling throughout the day to find out more about his research.

“A lot of people thought it was cool, and they stopped to ask what it meant and how it was impacting them,” he said. Great Lakes rivermouths are home to ports and cities that have lots of human interaction, according to an article published in Journal of Great Lakes Research in 2013. The activity can harm marine health through factors such as runoff and improper waste disposal. 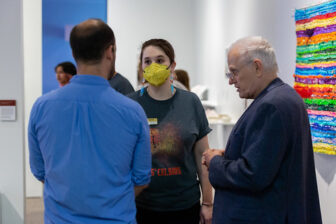 “Science gives artists opportunities for an approach they have never taken before,” he said. Artistic expression and interpretation can improve the observational skills of scientists, too.

Science and art have come together all over the scientific community, according to another Annis researcher, Michael Hassett. Institutions nationwide promote seminars through colorful posters, feature artwork in their studies and have even spread water awareness through interpretive dance.

You don’t have to be an activist to take action. According to Yingling, the people viewing his mural would often ask how they could help preserve yellow trout along Michigan’s west coast.

“The best way for us to generate funding is to get the public interested in what we’re doing,” he said.

Just like Yingling, Sullivan’s team gets out into the community with artistic exhibits and performances based on research subjects like climate change, immigration, and technology.

“We’re not about sitting on the shelf, but taking action,” Sullivan said.