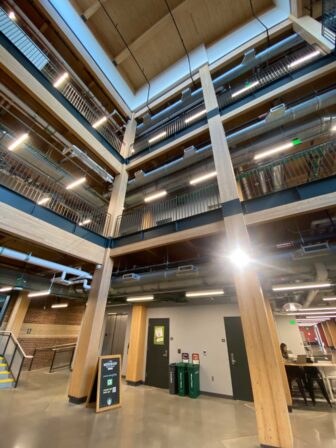 This mass timber building at Michigan State University stores nearly 2,000 metric tons of carbon in its timbers, the equivalent of not burning more than 2 million pounds of coal. Image: Cameryn Cass.

Michigan businesses interested in reducing their carbon footprint are looking to build with large wooden panels instead of steel or concrete.

Nationwide, demand for what is called mass timber tripled between 2018 and 2021.

There are different kinds of mass timber, but the term refers to multiple wood panels either nailed or glued together and that are strong enough to replace concrete and steel, which contribute 8% to greenhouse gas emissions, according to Canadian architect Michael Green.

Nearly half of America’s greenhouse gas emissions come from the building industry. Since a little more than a cubic yard of wood can store one ton – about the weight of the Liberty Bell– of carbon dioxide, mass timber is a great way to reduce our footprint, said Sandra Lupien, the director of MassTimber@MSU, a research and education group promoting mass timber in the Great Lakes region.

Half of the weight of a tree is from stored carbon in its wood, and the rest is water, oxygen, hydrogen and a mix of other elements. In other words, wood is a carbon sink. Building with it can prevent or delay carbon from being released into the atmosphere when a tree dies or burns, Lupien said.

Last year, Michigan State University opened one of the first mass timber building in Michigan. Already there are two more mass timber projects underway in the state, one at a K-12 school in Kalamazoo and another at the Great Lakes Boat Building School in Cedarville.

Another 27 projects in Michigan on the drawing board plan to incorporate mass timber.

At minimum, the building in Cedarville will have a roof made of mass timber, though those involved with its construction are hopeful to build the whole building out of it, said Nikki Storey, the president of the Great Lakes Boat Building School.

The only thing stopping them is funding.

“That’s part of the problem with mass timber: I don’t know that the economy of scales exists yet to be able to get good pricing on it,” Storey said.

Since mass timber comes in sheets that are easy to put together – Lupien equated it to building with Lincoln Logs – there’s a major time savings with using it. But since there are no mass timber manufacturers in Michigan – the closest is outside of Chicago – it’s not always easy to get it. 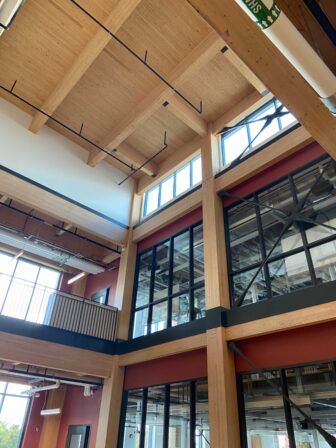 Mass timber advocates hope that Michigan State’s STEM Teaching and Learning Facility will be a place where contractors can learn to build with the more sustainable alternative. Image: Cameryn Cass

Typically, mass timber products are made from softwood trees – think coniferous, like evergreens – which make up 30% of Michigan’s forests. The remaining majority of Michigan trees are hardwood, meaning they’re deciduous and lose their leaves, Lupien said.

Researchers at Michigan Tech University are experimenting with making mass timber out of hardwood instead, a niche that might provide economic opportunity.

It is an untapped opportunity.

“Michigan is a forestry state,” said Conan Smith, the president of the Michigan Environmental Council. “If we can advance the construction materials that are rooted in wood, it’s to our economic benefit.

“It’s not just a great environmental opportunity, it’s a great economic opportunity for the state of Michigan,” Smith said.

Each year, the state removes 30% to 40% of the forest’s growth, said Brenda Haskill, a forest marketing and outreach specialist at Michigan’s Department of Natural Resources.

“We’re at a really interesting place in terms of moving the forest industry forward,” Haskill said.

Talks of attracting a mass timber manufacturer to Michigan are underway. However, an aging workforce and the rising cost of diesel fuel mean a decline in logging firms, Haskill said.

Making sure we have loggers to harvest trees and get them to the mill is really the biggest concern, Haskill said.

“I’m hopeful, but there’s a lot of pieces that need to be addressed,” Haskill said.

Michigan is in the same boat as the other Midwestern states; there’s more mass timber manufacturing and interest out west, Haskill said.

Another challenge is Michigan’s outdated building codes, said Brian Craig, the board chair at the Michigan Forest Biomaterials Institute.

The most recent version of the International Building Code is from 2021 and offers more flexibility and clarity for how high you can build and how much wood can be exposed with mass timber, Craig said.

But mass timber doesn’t behave like a 2 x 4; instead, it behaves like a tree. Think of an unsplit log in a fire pit, and how it chars on the outside: that’s what mass timber would do in a fire, Lupien said.

Craig said that timber can be even safer than steel when it burns.

“Think about what happens when steel gets hot. It sort of turns into spaghetti, whereas mass timber’s surface chars and then protects the rest of the timber,” Craig said.

Lupien said that even with the outdated building codes, builders in Michigan are still able to use mass timber, and they should.

People using the buildings – at least the one on Michigan State’s campus– express the aesthetic benefits of bringing nature indoors, Lupien said. 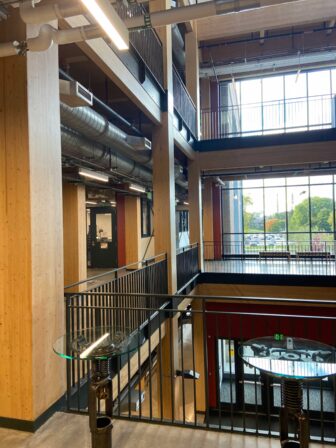 That’s a Greek word that translates to “love of life. ” It taps into our inborn desires of being close to nature. Biophilic design – like incorporating wood into buildings – has even been found to promote human wellness and productivity, according to the Natural Resources Defense Council.

Putting the more sustainable, attractive alternative into Michigan buildings is a question of price and supply.

“It’s been used in Europe for better than a decade now,” Smith said. “It’s a product that’s far better for the planet than concrete.