The project is funded by We Energies which put money into a mitigation fund as part of a settlement agreement. That agreement was negotiated while obtaining Federal Energy Regulatory Commission licenses to operate several hydropower dams on the Menominee River.

Hydropower dams can kill the mussels by stranding them during water drawdowns.

The project helps We Energies and other power companies better manage their reservoirs to protect the native animals that live in them, said Ashley Moerke, the lead researcher.

Hydropower and other dams often displace and destroy mussel populations, some of which are decades old.

“For example, when they draw down the water in the reservoir to do repairs on the dam, the mussels can be stranded and die,” Moerke said. “In some of these reservoirs it could be tens of thousands, hundreds of thousands of mussels that die.

The researchers scour sites along the Menominee River, looking for mussels and learning about the kinds of places they tend to hang out in.

“Our work will help these facilities to better predict where the mussel hotspots are,” Moerke said. “Then, they can bring people in to relocate the mussels in advance of a drawdown. This way, the mussel mortality is much lower.”

Native mussels are essential components of the food web, Moerke said. Most live 10 to 20 years, but some live up to 50 years. They provide food to semi-aquatic mammals like muskrats and racoons, who will leave the shells in piles called middens. They also provide shelter to aquatic insects.

“They’ll often be found in environments that have really soft substrate, and they’ll be the only stable surface in the area,” Moerke said. “They act as a stable floor for other aquatic invertebrates, particularly aquatic insects. Studies have shown that they’ll often harbor important species like stonefly larvae which are a key part of many fishes’ diets.”

Native mussels also keep the lakes and rivers clean by filtering the water at very high rates, she said.

Due to the extremely invasive zebra and quagga mussels, invasive species can be more familiar than the native ones. Of the 40 native mussels species in Michigan, about 43 percent are endangered 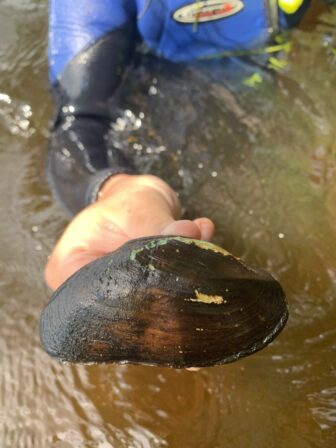 “Native freshwater mussels are a group of organisms that are under-appreciated,” Moerke said.

“I think that the general public would call them clams. But native freshwater mussels are a specific group of bivalve shellfish with a really unique life cycle and an important role to play in the environment.”

In 2019, a team of Michigan Department of Natural Resources experts developed protocols to protect mussels from river construction projects. This was a huge step forward.

“Since then, we developed two new protocols that were for lake projects and then one for the drawdowns,” said Elle Gulotty, a resource analyst at the Michigan DNR Fisheries Division. “This was the first one specific to Michigan and our resources.”

The Lake Superior State University research project, which is part of these protocols, documents native mussel hotspots and develops strategies for relocating them to avoid construction. “Our crew consists of about six undergraduate researchers,” Moerke said. “We take out a few boats and use snorkeling or bottom bucket viewers.”

Once they find a mussel, they identify it.

“We take length measurements and age the mussel as well, based on its growth rings,”  said Michael Hillary, one of the undergraduate researchers and a crew lead.  Then we give a condition estimate on the mussel. After this, we carefully put them back.” 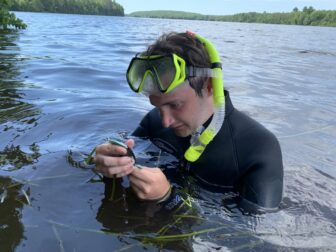 In addition to locating and documenting the mussels, researchers study the shore to  understand the types of habitats the mussels like. That way they can better predict where to find them.

“Part of the project is understanding the relationship between the area surveyed and the species recovered,” Hillary said. “Where are the staff going to be able to maximize these recovery efforts? And what habitat should they be looking at?”

The actual relocation of the mussels is a tedious process. Efficiency is essential to save as many as possible.

As the water recedes during a water drawdown , the mussels are exposed and in danger of drying out or being eaten, Gulotty said. People have to collect them by hand before the water recedes, document their orientation and relocate them to a similar habitat and position.

“Hydropower operations can have very severe and acute impacts and cause lots of stress and mortality, especially to freshwater mussels,” Gulotty said. “Habitat fragmentation from dams is very severe and widespread across the state. There are more dams than a lot of folks realize, and fewer of them are producing power than people realize.”

Hydropower is often thought of as a more sustainable and environmentally friendly option for producing electricity. But without careful and proper management, these facilities can have disastrous effects on the environment.

“I think that everyone wants to do better for the environment,” Moerke said. She said that these companies are driven by profit and the environment is a “luxury” they can afford to sacrifice. The mitigation fund compels them to provide some protection.

This project saves power companies money since they have to pay fines for the destruction of native mussels, Moerke said. If they have efficient methods of moving the mussels, it is cheaper to relocate the mussels than to deal with the fines.