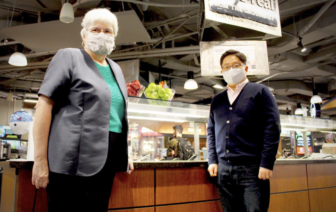 There is so much you can learn from a bowl of fruit, a kale smoothie and a deli sandwich with spinach in a college cafeteria, according to a new study from the University of Guelph in Ontario.

Underconsumption of fruits and vegetables is a universal problem. However, it is especially prevalent in young adults, says the study, which introduces a new technique called “nudging” to increase fruit and vegetable consumption in its students.

Nudging refers to interventions that modify an environment to alter people’s behavior in a predictable way without forbidding previously available options or significantly changing incentives.

“Instead of forcing people to create their own habit based on sheer willpower, nudging helps people to steer towards healthy foods by arranging food in more advantageous spots in your environment,” said Associate Professor Sunghwan Yi of the University of Guelph’s Department of Marketing and Consumer Affairs.

While the “nudging” technique seems strategically doable, it also sounds mentally draining. Why not just increase the quantity of fruits and vegetables offered in a college cafeteria?

“Health education has been effective in informing people of the advantages of healthy eating. What health education is not very good at is prompting people to make healthy decisions when they’re about to make this decision,” said Yi, a coauthor of the new study.

“Eating is only a small part of our daily lives, so when we are stressed and have other important things to think about, we tend to fall back on our habits,” he said.

According to Yi, eating is an automatic habitual behavior which people tend to fall back on, and nudging is an easy and more natural way to help people choose healthy foods.

This study occurred over a 12-week period on the university campus. Five mini-studies were conducted in the school’s cafeterias.

Smoothies were the most popular breakfast choice among students, so naturally it was the first place for researchers to try out a nudging technique.

Green posters prompting “Are you getting your serving of veggies in? Try adding kale or spinach” were strategically placed under the menu board. As a result, increased use of kale and spinach in smoothies happened. 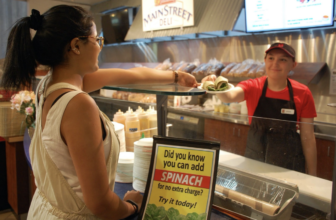 A student from the University of Guelph adding spinach to her deli sandwich. Image: Angela Mulholland

Another successful tactic to “nudge” students to eat more greens occurred in the deli line.

Spinach replaced the location and tub size of lettuce – much closer to the customers – and resulted in selling more sandwiches containing spinach.

Fruit baskets holding apples, bananas, oranges and grapefruits were the next target.

In general, fruit baskets didn’t receive much attention, so a bright yellow-colored poster prompting “Try a FRESH whole fruit today!” was placed directly next to the baskets.

The successful results of the study were exactly what Yi and his collaborators hoped for.;

However, there are further implications they would like to see.

“All the techniques can be implemented in campus settings. I would like to see student organizations become more informed on the principles of nudging and ask their university to implement these nudging techniques for the benefit of the students,” Yi said.

In hopes of increasing awareness on his own campus, Yi took the initiative to talk with a student organization called SNAP, or Student Nutrition AwarenessProgram, to encourage more direct involvement with campus food operators.

The SNAP program allows students to educate their peers on healthy eating habits, as well as navigate dietary restrictions on campus.

Jessie Trupp, the dietician with Hospitality Services at the University of Guelph, works closely as a preceptor with SNAP and dietetic interns, guiding them through their confidences.

According to Trupp, SNAP stamp cards have been an ongoing initiative in encouraging healthier and regular eating habits among the students.

For every two breakfast items, whole fruit or salad item picked, students receive a stamp on their card. Once 10 stamps have been acquired, students are rewarded with free food.

“We are trying to incorporate balance,” Trupp said, “and normalize eating habits.”

In addition to the SNAP stamp cards, Trupp is working with her colleagues on other healthy eating initiatives.

The school offers various ethnic food choices and cook-to-order stations, as well as plant- forward kitchens that include a plant-based and plant-rich menu.

“We take pride in making things from scratch,” said Trupp.

Local sourcing and bringing in products that come with the season are other ways the university aims to improve healthy eating.

However, many students take for granted the benefits of nutritious foods and eating regularly.

“There is a perception that healthy eating is expensive, and students will often gravitate towards the cheaper food choices,” said Trupp.

It is a priority to Trupp and her colleagues to meet the needs of students, incorporating balance in their diet and reiterating the importance of eating regularly.

After all, a healthy diet helps with academic performance.

The study appeared in the journal “Appetite.”