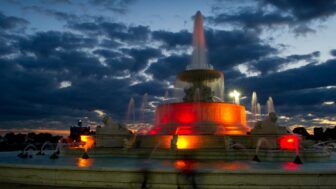 The installation of a state-of-the-art street lighting system on Belle Isle – located on the Michigan side of the Detroit River across from Windsor, Ontario – was a major step forward in saving energy and electricity while improving safety for visitors.

Now five years later, a new study says computer optimization modeling could lead to even further savings and other benefits, such as fewer crashes, for communities that upgrade their street light systems.

New computer modeling shows the number of replacement lights could have been as low as 170 while providing maximum coverage on the 987-acre island and saving about $100,000 on new poles and operating costs, according to the study by researchers at the University of Toledo, Metro Engineering Solutions in Livonia, which designed and installed Belle Isle’s replacement lights, Southern Illinois University and China’s Wuhan University in China.

Belle Isle was established as a city park in 1845 and became a state park in 2014 under a 30-year lease. Major attractions include the Belle Isle Aquarium, Anna Scripps Whitcomb Conservatory, Belle Isle Nature Center and Dossin Great Lakes Museum.

It drew 5.2 million visitors in fiscal year 2021, according to the Department of Natural Resources (DNR), which manages the park.

“We would like more people to be aware of this optimization model, especially nontechnical people who may not be aware of these tools,” said study coauthor Yue Zhang, an associate professor in the Department of Information Operations and Technology Management at the University of Toledo.

The planning process considers such factors as height and spacing of lamp posts, type of road surface, glare, and coverage distance. For example, street lights should cover the centerline of every road and at least two lights should cover intersections, according to the study.

However, he said, “the presence of personnel from the DNR Law Enforcement Division and the State Police has had a more significant impact.” Most of DNR’s enforcement activity there relates to traffic violations.

The University of Toledo’s Zhang said mathematical optimization methodology has been used in manufacturing for decades, but his team’s work integrates it with geographic information systems, or GIS, for large-scale applications such as street lighting planning.

It’s the “science of better,” he said.

Had the same planning approach been implemented citywide when the authority rebuilt Detroit 65,000 street lights in 2016, that savings would have been at least $28 million, the study said.

The intensity of the savings is quite significant, the study said, and the extra money could have been used for other projects, such as improved lighting in specific areas or “places with a high crime rate, where the incidence of traffic accidents is high or where there are many pedestrians at night.”

One thought on “Belle Isle study lights way for savings”