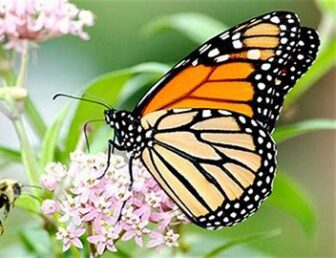 In July, the International Union for Conservation of Nature listed the monarch butterfly as endangered for the first time in history.

Potter Park Zoo in Lansing, Michigan, first installed a pollinator garden in 2018. With the recent news of the monarch’s decline, the zoo is encouraging people to build wildlife habitats of their own.

Megan Knight, the assistant learning programs coordinator for Potter Park Zoo, said the decrease in monarchs and other pollinators is largely due to reduced healthy habitats.

Another reason for the drop in monarch population is the use of pesticides.

“Some of the pesticides we use on our crops can kill the plants that the butterflies eat,” Knight said.

University of Michigan ecology and evolutionary biology professor Mark Hunter has studied monarchs in Northern Michigan for more than15 years.

In his research, he found the monarch population has decreased by 75%.

Those changes are also happening to other pollinators, like the European honey bee.

“Here in Michigan, fruits and vegetables, that’s a $2 billion dollar industry that relies on pollination services. So, in the absence of good pollinator population, there’s economic hardship,” Hunter said.

Along with the reduction of healthy habitats, climate change has a huge influence on the monarch population. Hunter said weather that’s bad for monarchs has become more common over the years.

“As the climate has changed, the variation and severity of climatic events has increased,” Hunter said. “For a species like the monarch that migrates, it’s very much dependent on having good weather during its journey.”

Hunter says monarchs are an indicator species in the environment.

“Because they are so bright and so obvious, we’ve noticed how badly their populations are dropping, and that tells us what’s happening to many other species in the environment,” he said.

To increase the monarch population, Hunter recommends adding more milkweed into gardens. That helps the butterflies at their early stages of life.

“Monarch mothers decide where they are going to lay their eggs, and that influences where their offspring grow up,” Hunter said. “They like to choose which milkweed species they’d like to lay their eggs on, depending on their own health.”

Along with milkweed, Knight says people should plant native flowers like black-eyed susans and sunflowers to help combat habitat loss. She said she hopes that Potter Park Zoo will be able to sell seeds from its pollinator garden in its gift shop this fall.

Genevieve Fox reports for WKAR in partnership with the Knight Center for Environmental Reporting.