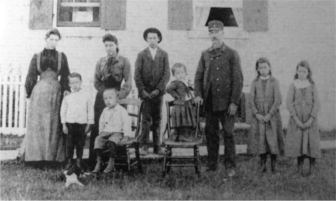 James Davenport and eight of his children at the McGulpin Point Lighthouse, taken some time after his wife’s death. Credit: Emmet County Madelin

The wife and newborn daughter of longtime McGulpin Point Lighthouse keeper James Davenport died during childbirth in 1891. Seven years later, his son drowned when falling through the ice in the Straits of Mackinac.

“The challenge of caring for his remaining eight children probably weighed heavily on Davenport,” senior archaeologist Sarah Surface-Evans of Michigan’s State Historic Preservation Office wrote in a recently published study of the well-being of keepers and their families at three Great Lakes lighthouses.

Davenport used his “paltry annual salary” to buy toys for the five girls and three boys, gardened, maintained an orchard, raised pigs and hunted to feed the family. Physical evidence unearthed at the site in Mackinaw City included bones from butchered pigs, spent ammunition, dolls and doll-sized dishware, canning jar fragments, marbles and “multiple pepper sauce bottles, which could have been used to store ketchup, vinegar or relish.”

Davenport, who staffed the lighthouse 3 miles from the nearest town for 27 years, “was very focused on maintaining the well-being of his children through access to both food and play,” Surface-Evans wrote.

Davenport’s experience reflects how tough life was for lighthouse keepers in remote locations around the Great Lakes.

Their arduous duties included climbing the many steps to tend the light, assisting ships in trouble, carrying heavy loads and shoveling coal.

The work “required round-the-clock attention and a military-like routine,” as well as an assumption the keepers were physically fit, according to Surface-Evans.

“While lighthouses housed people, they were primarily built as workspaces and not necessarily designed with the comfort of living in mind,” she wrote.

She began exploring the archaeology of Great Lakes lighthouses in 2011 as a Central Michigan University faculty member. 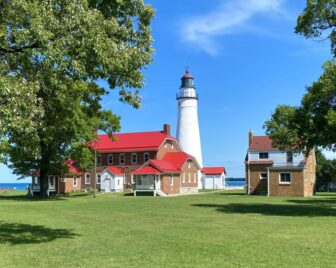 40 Mile Point, automated in 1944 and transferred to Presque Isle County in 1984, is now a museum. McGulpin Point was decommissioned in 1906 and sold in 2009 to Emmet County for restoration and reopened to the public. St. Clair County now maintains Fort Gratiot, the first Great Lakes light station.

Each Great Lakes lighthouse “represents a broad swatch of maritime and lighthouse history from the 1820s to the 1940s,” when the last of them were automated, Surface-Evans said in an interview.

Surface-Evans’ own chronic illness motivated her to use archaeological evidence such as the remains of medicinal objects, food and personal items, as well as documents, to discover how people living and working in lighthouses managed their health.

She wrote, “How did their health affect their daily lives and mental well-being? How did social trends in medicine influence their own perceptions of well-being?”

She said the most surprising finds at the sites were domestic objects relating to families and family life.

The mythology is that lighthouse keeping was a “lonely pursuit and a male realm. The reality is lighthouse keepers typically were married and had family or extended family living with them there,” she said. That included elderly parents and unwed sisters.

The artifacts left behind can help correct that “misinterpreted perspective,” she said.

Official documents like keepers’ daily logs provide only basic information about such mundane matters as weather, passing ships and maintenance, she said. “We can learn so much more by studying the artifacts they live behind.”

The three sites provide insights into how keepers and their families lived, including their use of medicines. For example, there were fragments of bottles of medications for stomach and digestive problems and nose drops excavated at 40 Mile Point. Other finds included bottles for castor oil and milk of magnesia.

Given keepers’ low salaries and heavy responsibilities, “it appears that being unwell was a luxury in itself,” Surface-Evans wrote. Doctors’ visits were inconvenient and expensive, so they depended on over-the-counter products as cheaper alternatives to reduce or relieve symptoms and “maintain the perception of well-being.”

Artifacts from lighthouse sites can also expand knowledge of themes other than health, she said, such as labor and working class life, life “on the frontier of the industrial expansion happening in the Great Lakes,” and maritime history.

The program has handed out $650,000 in the past five years, matched by another $650,000 raised by grant recipients. It typically distributes two to four awards each year, she said.

Her study appeared in the International Journal of Historical Archaeology.

One thought on “Artifacts reveal human side of Great Lakes lighthouses”