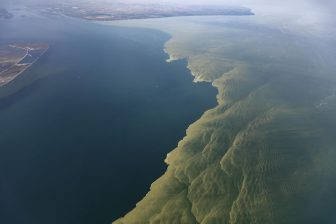 Michigan watersheds are still wracked with pollution from decades ago, along with new runoff, said Rebecca Esselman, the executive director of the Huron River Watershed Council.

When the federal Clean Water Act was passed in 1972, rivers got cleaner, but not perfect, she said.

“We still deal with some legacy contamination,” Esselman said. “Stuff that’s still in the soil and groundwater in the watershed and stuff that is still in the sediments in the river from that industrial history.”

Ecological restoration projects that groups like the watershed council are leading are crucial to Michigan’s water quality, Esselman said.

According to the Michigan Water Environment Association, there are close to 30 such groups in the state.

Esselman said three things have hurt watersheds such as the 900-square-mile Huron: legacy contamination from old industry, agricultural runoff and emerging contaminants. Emerging contaminants are unregulated synthetic chemicals that make their way into the water, like PFAS.

“A lot of these contaminants are not visible, although some of the damage to the river system is visible,” she said.

Algae blooms are often a common sign of unhealthy water, she said.

According to the Environmental Protection Agency, contaminated drinking water can cause gastrointestinal illness, adverse nervous system and reproductive effects, and chronic illnesses.

To clean up the watershed, which drains water to the Huron River through hundreds of tributaries, the council restores habitat, removes dams and builds green infrastructure.

“Maybe the No. 1 best thing you can do for a river is to remove a dam,” Esselman said.

She said turning a free flowing river into a stillwater system can hurt the ecosystem’s health, so removing the dam returns the river to its natural state.

She said a decade ago, the Ann Arbor-based council removed a dam in Dexter and is now working to remove the Peninsular Dam in Ypsilanti.

The council has also been increasingly focused on green infrastructure.

“This is using nature to capture and clean water before it hits the river,” she said. “So we use things like rain gardens, porous pavement and even land protection because our natural lands like our forests and prairies do a far better job at cleaning our water than concrete.”

She said while the council has been able to help the watershed, funding is one of the constraints it experiences, along with policy and regulatory constraints.

“Ensuring that we are keeping as much of our natural lands as possible in this state will be an investment by our government that will help keep our waterways clean and our drinking water safe,” she said.

The plan, which was unveiled in April, included protecting 30% of Michigan’s land and water by 2030 to use as natural greenhouse gas capturers.

It also includes a commitment to avoid converting land for uses that increase greenhouse gas emissions and to encourage land use for green infrastructure.

Liesl Clark, the director of the Department of Environment, Great Lakes and Energy, said the plan reflects discussions with advocacy groups, public transit, government officials and others throughout the state.

Clark called the plan a game-changer for the state’s economy and environment.