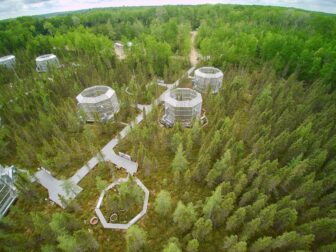 In the Marcell Experimental Forest in Grand Rapids, Minnesota, there are no trails for hiking, grounds for camping nor lakes for boating. Instead, there are temperature-manipulating chambers and field laboratories.

This part of the U.S. Department of Agriculture Forest Service Northern Research Station brims with scientists studying the effects of climate change on North America’s boreal peatlands. Peatlands are a special type of wetland that formed over 10,000 years ago. The project is called Spruce and Peatland Responses Under Changing Environments and goes by the apt acronym SPRUCE.

The $50 million project, funded by the U.S. Department of Energy and Oak Ridge National Laboratory in Tennessee, began operations in 2014. It models the future climate and how that climate may affect energy needs.

“The largest ecosystem experiment on the planet is happening right here in the Marcell Experimental Forest,” said Randy Kolka, the SPRUCE project leader and a Forest Service research soil scientist. 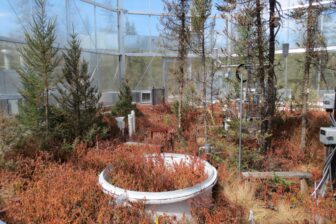 The 40-foot diameter chambers at the Marcell Experimental Forest are controlled at different temperatures and levels of carbon dioxide to simulate the real-world effects of climate change. Image: Stephen Sebestyen

Marcell was chosen to study because of its peatlands, a unique landscape that occupies just 3%  of the earth’s surface, yet stores 30% of soil carbon, Kolka said.

Peat is partially decomposed organic material that forms only under low temperatures and conditions so soggy that organic material can’t fully decompose and release carbon. Instead, the carbon is stored in the peat. But as temperatures increase – such as when the climate warms from too many greenhouse gasses –  the landscape dries and thaws. That lets soil microbes break down the peat and release carbon and methane.

Two recent SPRUCE studies found that increasing temperatures speed the rate that carbon and methane are emitted from peat.

“If all that carbon wasn’t stabilized in this peatland, it would be in the atmosphere and would largely lead to higher carbon dioxide concentrations in the atmosphere,”  said Stephen Sebestyen, a SPRUCE scientist and Forest Service research hydrologist. 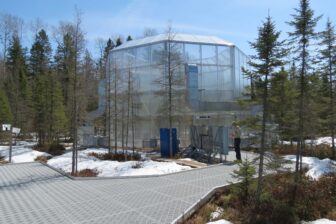 Carbon dioxide and methane are both greenhouse gasses. When sunlight reflects off the earth’s surface, these gasses hold in some of the heat like a blanket. As human activities like burning fossil fuels and destroying carbon-storing landscapes like peatlands increase, more gasses are released, trapping even more heat.

Climate change is a vicious cycle – the increasing warmth is what helps peat produce yet even more of those gasses to cause yet more warmth.

“If we look at the mean annual air temperature, it’s increased by about two and a half degrees Celsius since 1960,” Sebestyen said. “That doesn’t sound big, but that’s actually one of the biggest temperature shifts we’ve seen on the planet. It’s enough to be shifting us into a new climate regime, which is not the climate that these peatlands formed under.”

The release of carbon is not the only worry, Kolka said. The warmth also releases methane, a greenhouse gas with 80 times the warming power of carbon dioxide.

“It’s not going to take much warming to make peatlands part of the climate issue as opposed to a solution,” Kolka said. Even if temperatures increase just 2.5 degrees, “these ecosystems flip from being carbon sinks to sources.”

While peatlands have not yet become sources of carbon dioxide in the atmosphere, trends suggest that eventually they will be.

“It’s a bleak future,” Kolka said. “The predictions are saying that we’re going to continue to warm. There aren’t many scenarios out there that say we’re going to decrease the carbon dioxide in the atmosphere. And until that happens, peatland functions are going to be negatively impacted.”

Many people are unaware of the threat. 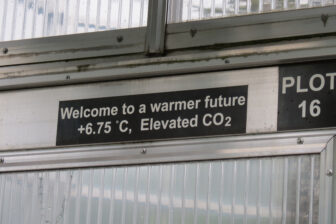 Scientists are welcomed to a changed climate when they enter the research chamber on Plot 16 in the Marcell Experimental Forest. Image: Stephen Sebestyen

“They have no idea what a peatland is,” Sebestyen said. “What we’ve found is disconnected from the general sphere of knowledge, but it is connected in a broader sense to interest in the climate and atmosphere.”

Switching to renewable energy sources may preserve the carbon-storing function of peatlands.

“We’re not going to burn all the carbon out of these peatlands,” Sebestyen said. “That would take a very long time and very dramatic shifts in water availability and air temperatures. But anything that moves us towards a net zero carbon emission from fossil fuels or biofuels is really going to be helpful.