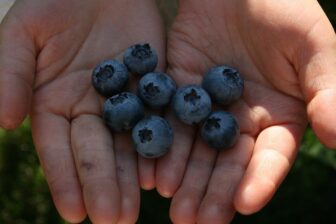 Danielle James with a handful of blueberries she picked. Image: Annie James

On the first of Michigan’s warm spring days, after spending most of the winter hibernating in a university classroom, I walked outside and felt the sun beaming on my shoulders. 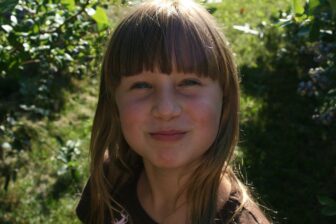 Danielle James, at age 7, stands in the blueberry patch during her lunch. Image: Annie James

It took me back to when I was seven years old.

It was late July, or maybe early August. My bare toes wiggled in the grass behind my house. Although it was only noon, I already had a slight sunburn. My backyard seemed nothing but ordinary to me. Just my house, a few trees and then rows upon rows of blueberry bushes.

I wouldn’t understand until years later how strange that is to some people, or how rare and lucky I was to grow up on a blueberry farm. I had an endless supply to snack on and plop into pancakes.

But it wasn’t just the blueberries that made my childhood eventful.  For two months a year, my backyard was also chock full of strangers.

I spent nearly all my free time outside, ducking to hide between the bushes with my sister or trying to run as a tin bucket banged against my knees. To me, growing up on a blueberry farm was a simple fact.

For my parents, who still run the farm, it’s been much more complicated. My mother spends 10 months of the year pruning, preparing and reading weather forecasts. The next two months she works 12-hour days at our stand, picking, selling and talking with customers. 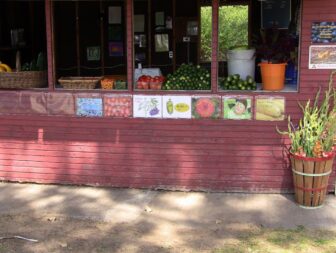 The owners of Blueberries Galore sell fresh vegetables and flowers from the stand when they’re in season. Image: Annie James

As the owner of Blueberries Galore Farm near Saginaw, she knows the worry that comes from a late spring frost or the mere sight of a beetle.

“Being a farmer, you’re kind of at the mercy of mother nature,” she said. “You can prepare, but really you just have to have some faith.

A late frost when I was a child killed nearly three quarters of my parents’ blueberries.

Luckily, they had other jobs to cushion the blow, and many other years were profitable.

But more of that kind of trouble – and more often – may be in store for the state’s fruit-growers.

In the last few decades, fluctuating temperatures in the late winter or early spring have harmed the crop, he said.

“The typical scenario is an unseasonably warm period in February or March that advances the development of the blueberry buds,” Hanson said. “This is followed at some point by a cold event.

“Since the buds are too advanced too early, they are damaged by the cold, even though the cold might not be very unusual,” he said.

Unusual temperature fluctuations are increasing as a direct result of climate change, according to research published in Frontiers in Plant Science by Gustavo Lobos, a faculty member at the Universidad de Talca in Chile and James Hancock, a professor in the department of horticulture at Michigan State University.

They analyzed how global temperature increases will lead to more dramatic fluctuations in rainfall and temperature, as well as the impact on blueberry crops.

They found that different varieties of blueberries well-adapted to average conditions don’t always have the flexibility to perform under environmental extremes.

Hanson said these fluctuations can cause more production losses than a consistent temperature increase or mid-winter cold event.

“This is a little counterintuitive if the mean temperatures are increasing,” he said.

But overall warming can also damage the plants, according to a study published in the Maine Journal of Conservation and Sustainability.

University of Maine researchers heated chambers to simulate a warming climate. When they tested a temperature increase of three to five degrees Celsius, they found that wild blueberry plants would photosynthesize less and grow small, thinner leaves.

Maine is one of the top 10 producing states in the U.S., according to the U.S. Highbush Blueberry Council. Twenty-six states produce blueberries commercially, but more than 98% of production happens in just 10 states, including Michigan.

That manifests in five different blueberry farms in and around my hometown. Each has full parking lots and hordes of customers come opening day.

For the customers that fill my backyard every August, these berries aren’t just a natural resource or a healthy snack. They’re a source of tradition. 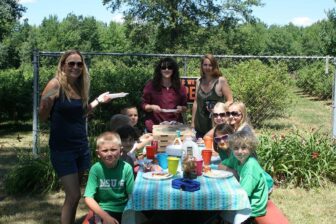 A few regulars and their kids sit down for lunch outside Blueberries Galore Farm. Image: Annie James

I thought I grew up with a yard full of strangers, but now when I return home every summer, I recognize many of the faces that file through. Teenagers I met when I was in grade school bring their kids now. I’m amazed when grandmothers use the same arthritic fingers I’ve seen for 20 years, stained blue, to nimbly pick an entire bucket of berries and bake a pie in the same afternoon.

For these people, and for me, these two months at the end of summer represent community and camaraderie.

Losing them is a step away from my childhood and toward more days of an empty backyard.

And that is an unexpected and hard to explain consequence of a changing climate.

Danielle James is a reporter for Great Lakes Echo. This essay is part of an occasional series on the impacts of climate change.