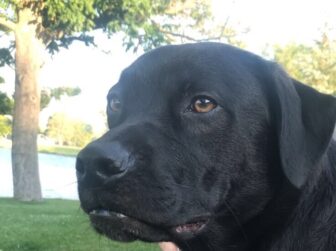 Two summers ago, I watched my aunt and uncle’s dogs while they were on vacation. On one of our evening walks, I learned that letting go of the leash is always the best option.

While my mom walked Parker and I had Bentley, we took a path that snakes through our neighborhood in Plymouth, Michigan, and that divides two ponds, each about the size of an ice rink.

Suddenly, Bentley jolted into a sprint – with me attached.

My shoulder jerked and my entire body pivoted to follow this mighty beast.

I planted my feet like I was water skiing, but nothing could slow Bentley. My legs came out from under me, and I was dragged along on my stomach. Mud and grass licked up the sides of my face as I tried freeing my hand from the leash that I had wrapped around my wrist, thinking it would give me a better hold on a large dog.

Unfortunately, that worked too well.

I finally wrenched my hand free, but not before greeting cold, dirty pond water.

When my dad’s laughter stopped and I knew I was uninjured, I got to my feet with my hands on my hips, panting. I looked around at these two ponds that I’ve grown up with.

I remembered them as once full of ducks, geese, fish, frogs, birds and other species that could be heard from a mile away. Tall cattails thrived on the perimeter with bushes, trees and other vegetation. Kids fished and played in the water.

Now, the only wildlife I could see or hear were the few ducks resting along the edge or in the pond. Almost all the vegetation had been stripped bare and algae coated the entire surface. The smell was like rotten fish. No one else was around, and that smell was probably why.

Everything that I once loved about these ponds was gone.

Similar suburban ponds are experiencing ecosystem changes due to fertilizers, lawn treatments, and human waste and population, according to a Yale University study in the Canadian Journal of Fisheries and Aquatic Sciences.

Suburban land use alters the food chain of residential ponds, the study reports.

And climate change plays a role. 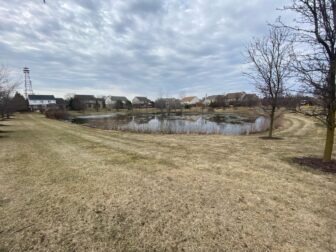 These ponds are built to provide habitat for wildlife and algae growth, water storage, removing nutrients and for aesthetic purposes, said Lois Wolfson, an outreach specialist and aquatic ecologist at Michigan State University.

One problem that ponds frequently encounter is too much algal growth, Wolfson said.

“They’re taking up most of the nutrients in the water and plants growing beneath would be prevented from obtaining enough sunlight for growth,” Wolfson said. “So, you’re decreasing the overall biodiversity in the pond because it’s been dominated by one group of organisms.”

Cyanobacteria, or blue-green algae, could be one reason the health of the ponds in my neighborhood have declined.

“They can lead to producing enough toxins that can be harmful to the wildlife in the pond,” Wolfson said. “Or if domestic animals, like pets, drink the water, that can be a big issue.”

I had noticed that almost all the vegetation around the ponds was gone.

People remove vegetation for easier lawn mowing and to make the ponds look nicer, Wolfson said. But that does more harm than good.

Vegetation catches a lot of the runoff from residential areas, like sidewalks and rooftops.

That runoff can contain “not only phosphorus and nitrogen, but oils and greases, and salts and other things,” Wolfson said. “If you have that vegetation, it protects or keeps that runoff from getting directly into the pond.”

And it provides habitat for birds, mammals, reptiles and amphibians.

“That’s why you might be seeing a difference, because you have lost a lot of the habitat for the animals,” Wolfson said. “And not only that, you’re increasing that amount of runoff.”

Climate change could also play a role, she said.

“Once they freeze, because of climate change, they might thaw out earlier in the season then they did normally,” Wolfson said. “So, there’s that much more contact time that the pond has with the land.”

Warmer temperatures are also something algae likes, she said.

“Just a degree or two more sunlight will encourage algal growth and plant growth, but they’ll compete with one another for what’s available – sunlight, nutrients, oxygen, CO2 – and one often wins out,” Wolfson said. “And oftentimes in a small pond, it’s going to be the algae.”

Wolfson said the first thing my neighborhood should do to reverse the state the ponds is to let the vegetation grow back to act as a buffer. People should also sweep around the area to get rid of fertilizer from sidewalks and lawns.

Short-term algae treatments can also help, but it would need to be applied many times through the years, Wolfson said.

It may take years for the ponds to return to their natural state, but I’m hopeful it can be done. If nothing else, it will give me a cleaner landing site the next time Bentley takes me for a walk.

Caroline Miller is a reporter for Great Lakes Echo. This essay is part of an occasional series on the impacts of climate change.