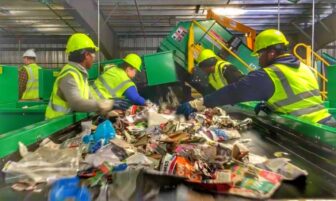 The majority of local government leaders in Michigan, 86%, say recycling is somewhat important or very important to their community residents, according to a new study from the University of Michigan.

However, Michigan’s estimated overall recycling rate is 18%, which lags considerably behind the national average of 32%. The recycling rate refers to the percentage of total goods that are recyclable.

Efforts to update recycling procedures, policies and practices are being made across the state.

Over the years, Delhi Charter Township, near Lansing, has made recycling significantly easier for its residents. It was the first township to receive gold status in the Michigan Green Communities Challenge.

“One thing that may be unique about Delhi and our recycling center is that it’s open to anyone, regardless of where you live, unlike many other centers,” said Allen Bryant, the township’s environmental coordinator.

One unusual way the township encourages sustainable alternatives is by bringing sheep to grassy areas to feed on the overgrowth rather than mowing it. A more recent challenge has been getting the community to embrace the change from open container collection of cardboard and plastic to using compactors.

The compactors reduce the amount of space used by the crushed material, but can also limit what recyclables can be returned.

“We’ve had to do a lot of community education, signage and increased efforts to get our community to embrace it,” said Sandra Diorka, the township director of public services. “But now we only have to haul (waste) one-quarter of the time.”

A 2011 report from the Michigan Recycling Coalition examined how the state could increase its recycling rate from 18% to 50%. The coalition, an association of recycling professionals and the state’s primary advocate for recycling, determined that an annual investment of around $76 million annually would result in at least a $400 million to $500 million positive return.

“This is because the value of the materials that we pay to put in a landfill would be captured through recycling and materials we use,” said Kerrin O’Brien, the coalition executive director.

“When it comes to disposal, it’s too easy to think that the work is done,” she said. “Waste is already invisible to the world, and paying to landfill materials that have value on the commodities market is a very high opportunity cost.”

“If we can divert these materials from landfills into new products, we can make jobs, build businesses and develop a circular economy that is beneficial to communities across the state and nation,” she said.

Gov. Gretchen Whitmer and the Legislature set a goal of tripling the current recycling rate to 45%.
Environmentalists say that goal may not be obtainable under present circumstances, however.

“It would be very hard for us to reach our goal without a policy framework on which local governments don’t give this issue the time and consideration necessary,” said O’Brien.

O’Brien said it is necessary to update the state’s solid waste law to increase recycling rates.

She said the legislation is an opportunity to level the playing field so “recycling and composting can compete with what now is a very cheap cost of disposal, because we have plenty of landfill space.”

The House has passed changes to the state’s solid waste law, and the legislation is pending in the Senate.

Transportation is another reason recycling rates are low due to lack of access in less populated areas.

Bradley Austin, a regional director and board member of the coalition said, “There are a lot of people in the state that want to recycle, but they need to have access to it. That might be in the form of a curbside cart that they get from their municipality, city or township or an established drop-off location in the community.”

Austin is also the operations director for the Marquette County Solid Waste Management Authority, where the recycling rate is only 8% in its territory.

In 2020, the authority upgraded its facilities, with the new facility opening in 2021.

According to the Department of Environment, Great Lakes and Energy, the Marquette facility recycled 115 tons in January 2020. Just one year later it recycled 600 tons. Marquette County alone saw a 50% increase in the amount of recyclable waste it handled.

Austin said it can service all 200,000 people in the Marquette region.