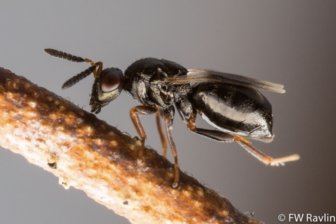 While invasive species are always threatening crops, a native pest is the biggest threat to the state’s blueberries –– the stem gall wasp.

In the spring, the wasp lays its eggs in the shoots of blueberry plants and “tricks” them into producing a swollen bulb, said Rufus Isaacs, an entomologist at Michigan State University. That stops the shoot from growing normally and lessens each plant’s yield.

“In recent years, we’ve seen increasing densities of them,” Isaacs said. “It’s definitely gotten to the point where it’s an economic challenge. It became a priority issue.”

Isaacs’ efforts to combat the stem gall wasp is just one example of studies funded by the Michigan Blueberry Commission to help growers stay competitive. The commission, which has seven governor-appointed members, is up for a renewal vote by ballots sent to all Michigan blueberry growers.

Michigan ranks third in the nation for blueberry production and contributes $132 million to the state’s economy annually, according to the Michigan Agricultural Council. The majority of the crop grows in West Michigan, predominantly in Allegan, Berrien, Muskegon, Ottawa and Van Buren counties.

But, according to a paper published by Kansas State University, profit margins in the blueberry industry are narrowing as global production lowers prices and production costs rise.

She said the commission uses grower dollars and grants to fund research into challenges growers face.

Nyquist said the commission has no plans to change the assessment rate.

She said in the five years the commission has existed, it’s funded $800,000 worth of research.

“That really speaks to the strength of the program, the need that growers and producers have to remain viable and be a leader in the blueberry industry in our country,” she said.

The commission has to be renewed by a majority vote every five years. Ballots were sent to growers on Feb. 22 and are due by March 11. Nyquist said she’s optimistic it will be reapproved.

Along with stem gall wasp research, it has also funded studies to improve blueberry pollination and to control spotted wing drosophila, an invasive species.

They found that some types of blueberries –– called cultivars –– are more resistant to the wasp than others.

Isaacs said that finding allowed a fellow researcher to set up a “breeding collection” of plants.

“He has a whole set where he knows what the different parents were,” Isaacs said.

The hope is to eventually understand what in a plant’s genetics makes it wasp-resistant, he said

They also found that some of the pesticides used were killing other bugs that could naturally control the stem gall wasp population.

Out of this research, Isaacs said there are three long-term approaches that can work together to control the stem gall wasp.

“We’d have resistant cultivars,” he said. “We’d have a biological control agent that would work, and if we needed it, we would be able to selectively use a newer pesticide that is less disruptive to the other insects.”

In the short-term, Isaacs said farmers have been replacing more susceptible cultivars with more resistant ones, which can be expensive.

“If your farm is mostly the susceptible cultivar, and you’ve got a lot of this pest, it is a really big deal for you,” he said.

“We couldn’t have done this work without the support of the commission,” Isaacs said.