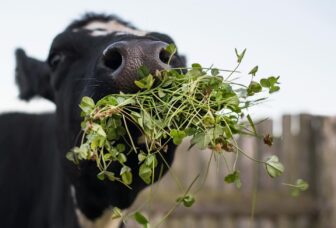 A practice focused on working with nature could be the next step for sustainable farming in Pennsylvania.

Regenerative agriculture is farming and grazing in a way that rebuilds organic matter in the soil and restores soil biodiversity. It reduces carbon, a greenhouse gas driving global warming, and improves water quality, according to Regeneration International, a nonprofit organization.

“That synergy between agriculture and nature yields the best results,” Su Fanok, the director of the Freshwater Conservation program of the Nature Conservancy’s Pennsylvania chapter, said recently.

The practice involves using cover crops – which are plants that slow erosion and improve soil health –  and practicing a no-till grazing technique that grows crops without disturbing the soil. It also encompasses an intense rotational grazing and not using fertilizers or pesticides, she said.

“The benefits of regenerative agriculture, really, is the opportunity for us to look holistically at our agricultural systems, and to be able to identify where we can do better, so that we’re still supporting our local farmers who are absolutely essential for all of us,” Fanok said.

The practice varies from farm to farm, she said.

One farm using this practice is White Stag Farms, a small family farm in Tyler Hill, Pennsylvania. The family wanted to eat healthier and ended up making a business out of it.

“We just wanted a different way to live a cleaner way to grow our own food and we just really got into it,” said Curt Hogancamp, owner of the farm.

The farm implements regenerative agriculture by raising livestock on grain that is organic, antibiotic-free and not genetically modified, Hogancamp said.

“There are a lot of definitions out there,” Hogancamp said. “I would say the best is trying to work with nature as opposed to against it and try to leave the land in a better condition than it was when we first started.”

The farm also uses the no-till technique and rotational grazing, using as little machinery as possible, he said.

Hogancamp said he has seen a buildup of organic matter that has improved the soil biodiversity and water holding capacity.

“I could tell from the areas where we’ve rolled out the hay bales and where we felt we’ve built up the organic matter, it’s made a drastic improvement when we have times of drought,” Hogancamp said.

The quality of the grass has also been moister, greener and lusher after implementing regenerative agriculture, he said.

“You could just put your hand in the soil and pull up a ton of earthworms,” Hogancamp said. “It’s making a difference.”

Drawbacks include the cost, which depend on the amount of land used, the amount of time it takes to raise livestock naturally and the lack of education around it, he said.

Fanok said regenerative agriculture is a work in a progress and that there is still scientific research going on to understand what this practice can do and how it can be taught to farmers and other producers.

“I think it’s a really exciting opportunity,” Fanok said. “You know, with a lot of energy behind it right now, there’s still a lot of unknowns, we don’t have all the answers.”