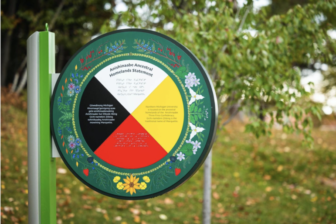 Acknowledging Native American ties to the land that Michigan universities occupy can make a powerful statement honoring the traditional history and culture, a tribal leader says.

“It brings awareness to what our ancestors went through in the past,” said Jamie Stuck, the tribal chair of the Nottawaseppi Huron Band of the Potawatomi Indians.

A land acknowledgment is a formal statement that recognizes and respects Indigenous peoples as stewards of the land where an institution is located.

Acknowledgments are often executed through signs on campuses, email signatures and statements read before organized events.

Many higher education institutions in the state, including Northern Michigan, Michigan State and Grand Rapids Community College, have adopted acknowledgments to recognize Native American culture in their areas.

Michigan has 12 federally recognized tribes. The 2020 census reported that Native Americans and Alaskan Natives compose 0.7% of the state’s residents.

Stuck said the trend in acknowledgments is caused by more general public awareness of traditional cultures’ historical and modern presence in the state.

Closer relationships with the Three Fires Confederacy, an alliance of the Potawatomi, Odawa and Ojibwe Tribal Nations, and universities are bringing awareness to the forefront, Stuck said.

One way the Nottawaseppi Huron Band, which has offices at Pine Creek Indian Reservation in Calhoun County and in Grand Rapids, has been working to raise awareness is by funding the removal of stereotyped and offensive mascots and statues.

Stuck said that drafting an acknowledgment statement is important in itself, but it’s more important that tribes recognized in such a statement are involved throughout the process.

“It’s important to us as Anishinaabek people that we are consulted and have a continued relationship with the universities after the acknowledgment is developed,” Stuck said.

Such collaboration ensures a tribe’s culture, heritage and values are represented accurately and historically, he said.

However, the relationship with tribes needs to go beyond the original consultation, and higher education institutions need to put ways of honoring the culture into practice.

Stuck said these institutions should make sure their students with Indigenous backgrounds have a “positive environment that focuses on the importance of their cultures and value systems as it relates to their tribal nations.”

Supporting campus associations like local chapters of the national Native American Student Organization is one way of accomplishing that, as well as creating academic programs focused on Native American studies, said Stuck.

He also advocated more recruitment of Native American students to increase their participation level on campuses.

Bazile Panek, the president of Northern Michigan University’s Native American Student Association, says it’s important for him to attend a university that makes an initial land acknowledgment but also puts it into practice by honoring traditional culture and supporting Indigenous students.

“The steps after are what really, really matter and make a difference rather than just a surface-level acknowledgment,” Panek said.

Panek and Northern Michigan’s chapter of the association have been working to ensure the university takes such additional measures by placing a physical acknowledgment sign on campus and fighting for further recognition.

“Another step would be for universities to formally recognize Indigenous Peoples Day, something we fought for at NMU, which I think is a step in the right direction,” he said.

Western Michigan adopted its land acknowledgment in 2019 but recently announced it’s creating a Native American Affairs Council to build relationships between tribal communities and to integrate Western knowledge and practice with more holistic and Indigenous views in learning environments.

Stuck and the tribe consulted with Western Michigan officials in developing their land acknowledgment, and he said the steps taken since then are important to bring the acknowledgment to fruition.

“It recognizes not only our ancestors and what they had to go through and survive, but it goes to show we have modern-day ties to the land as well,” he said.