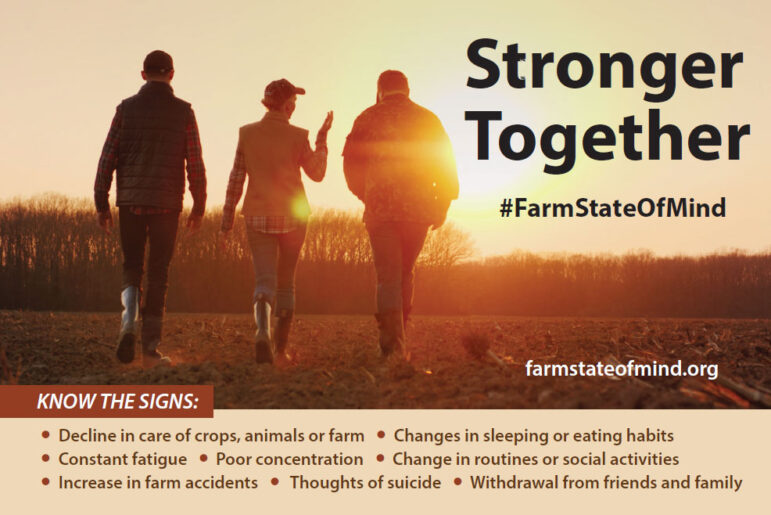 Farmers are known for their ‘pull yourself up by your bootstraps’ mentality.

It is rare they’ll admit they’re getting mental health help.

“Several have mentioned that they’re on antidepressants, I almost fell over in my chair when they told me that,” said Jodi DeHate, a technician for a state farm program serving the Missaukee Conservation District.

They talk about crops, prices, the weather…and suicide. Another farmer recently told her that if he didn’t get bankruptcy help, that would be his way out.

Because of outreach efforts by a farmer behavioral health support program, she could offer him a better solution.

MSU Extension’s Legacy of the Land program, which focuses on farmers’ mental health and financial wellness, completed its first year in September. It is funded by a two-year $500,000 grant from the Department of Agriculture and Rural Development.

“The overarching goal of the grant is to engage with farmers to help provide support for their farm financial needs, as well as their behavioral health needs,” said Eric Karbowski, the Extension’s community behavioral health educator.

He said the teletherapy program that Extension rolled out made a difference in farmers’ lives.

Teletherapy, also known as online therapy, became a necessity during the pandemic. People can now attend therapy by walking into their living room and booting up their computer.

Extension piloted the teletherapy program for five months prior to the start of the grant in September 2020. Since then, teletherapy referrals have increased by 733%, Karbowski said.

“Through a partnership with Pine Rest Christian Mental Health Services, we’ve been able to provide teletherapy services for farmers that have needed that next level of support,” Karbowski said.

“When somebody calls in, they identify themselves as seeking services under this extension program,” said Dr. Scott Halstead, the vice president of outpatient and recovery services at Pine Rest, a nonprofit organization founded in 1910 on the Cutler Farm in Grand Rapids.

“We match them to some of our therapists who’ve signed up to say, ‘Yes, I’m eager to work with farmers and farm families, and I have some farming experience.’”

When a farmer’s insurance does not cover behavioral health services, the grant covers the cost, said Karbowski.

Access to broadband is a major barrier to accessing telehealth services in rural areas, said Tonia Ritter, the manager of education and leadership programs at the Michigan Farm Bureau in Lansing. And it’s not just in the Upper Peninsula.

“In the village of Byron, people who actually live in town or right on the outskirts cannot access broadband,” she said. Ritter’s husband is a dairy farmer. They are not immune to the stresses that farmers experience, she said. “I see it pretty up close and personal sometimes.”

Said Halstead, “I think it’s clear to us now that your broadband connection should be thought of like you think about electricity. It’s a really essential tool for functioning and society today. And we have to figure out how to get it to people.”

Extension and the Farm Bureau also hold webinars for farmers and send out mental health educational materials and postcards to their members.

The Farm Bureau’s ‘Farmers After Hours’ webinars are posted on Facebook and its YouTube channel. Topics  include preparing taxes, applying for grants and addressing  access to mental health support.

“We want to help with the stigmatization that’s around mental health,” Ritter said. “We actually had a few farmers who had dealt with mental health issues on a webinar panel.”

“It was a fantastic discussion, where our members themselves just said, ‘Hey, it’s okay to seek help. And here’s how I got it.’”

The videos have received more than 7,500 views, Ritter said.

The extension’s ‘Lunch Breaks’ webinar series is held every Wednesday on its Facebook channel.

The goal of the ongoing series is to connect with farmers, to engage and create a sense of community across the state and to make it fun and interesting while doing so.

“We know that the connection piece is linked to so many things in terms of decreasing depression and increasing just overall mental health,” said Karbowski, the host of Lunch Breaks. “When we talk about beef, I call the lunch break ‘Beef Tips and Gravy’.”

Karbowski recently had a farmer reach out to him who had participated in the teletherapy program.

“He had reservations of engaging with therapy, you know, ‘We don’t want neighbors to see our truck sitting in the (therapist) parking lot,’” Karbowski said. “Being able to do teletherapy from the comfort of their home was really advantageous for them.”

“He told us that likely the teletherapy saved his life. He didn’t know if they would have made it without the program.”