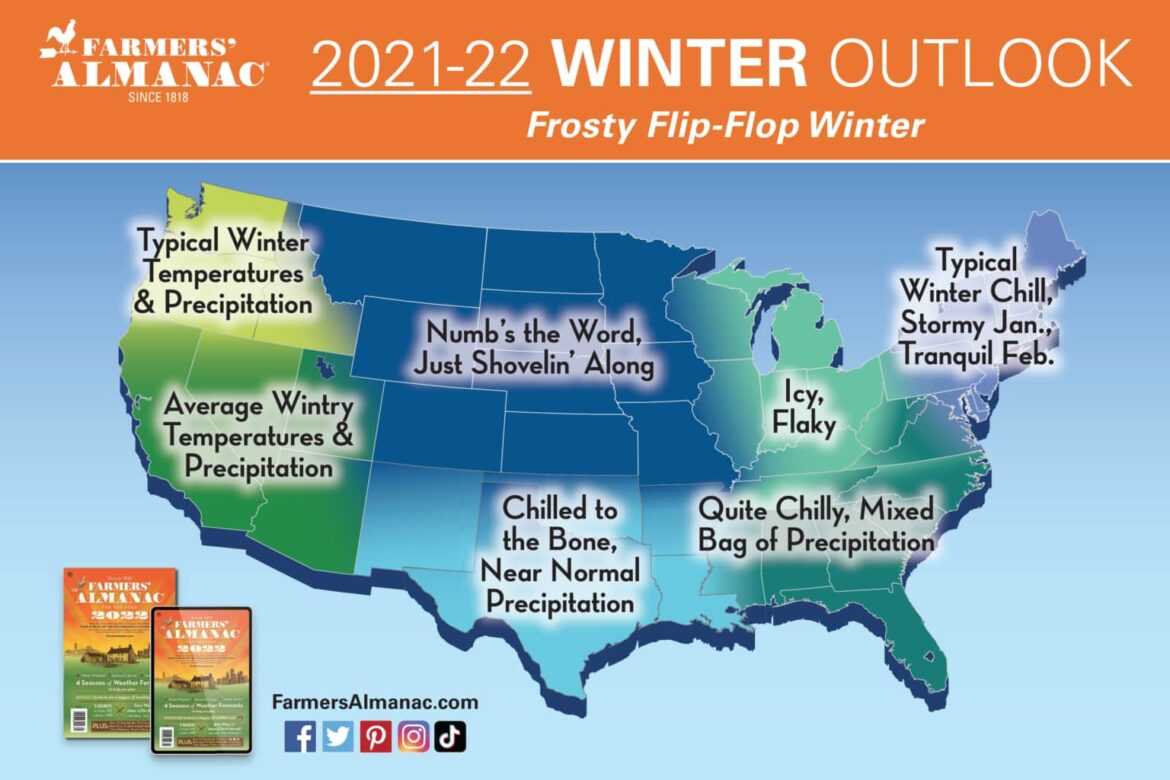 After an unusually warm and stormy summer, the Great Lakes region has in store a “frosty flip-flop” winter, according to the 2021-22 Farmers’ Almanac forecast.

The month-to-month contrast follows an unusually stormy summer for the Great Lakes region, which the Almanac predicted to be “muggy and thundery” last April.

The buzzwords for the Great Lakes this winter are “icy and flaky,” the almanac reports.

January is expected to begin mild with rain and wet snow, followed by 2-5 inches of snow possible in a storm at the end of the month, the publication predicts. February calls for bitter temperatures but little precipitation. March has been projected as snowy and stormy throughout the month.

What makes the Farmer’s Almanac so certain?

That’s hard to know. Its predictions do not include any type of computer satellite tracking or lore-based techniques, such as groundhogs, the publication reports. Its formula includes factors such as “sunspot activity, tidal action of the moon, the position of the planets and a variety of other factors.”

Atmospheric phenomena like El Nino and La Nina were not factors in the forecast, Duncan said. “Some people are saying La Nina might come into play, but we didn’t have a chance to factor that in.”

While the almanac’s website claims an 80-85% accuracy rate, meteorologists have always suggested taking the Farmers’ Almanac’s predictions with a grain of salt.

In 2017, meteorologist Jan Null compared the accuracy of the almanac’s temperature and precipitation predictions with the actual results. Forecasts were graded as good, not good or mixed, depending on if they were predicted the same as they were observed.

The National Oceanic and Atmospheric Administration also releases a 90-day prediction forecast from its Climate Prediction Center. Unlike the Farmers’ Almanac, NOAA uses the most up-to-date technology and computer models.

“Covering December, January and February we’re favoring only slightly above normal temperatures and above normal precipitation which includes rain and snow for the Great Lakes,” NOAA meteorologist Brad Pugh said. “La Nina is currently present and we expect La Nina to persist through the winter.”

La Nina is an atmospheric phenomenon that is created by cooler than normal sea surface temperatures across the equatorial line in the central Pacific.

“It typically does lead towards a wetter winter for the Great Lakes region,” Pugh said.

The Farmers’ Almanac has been published since 1818 when it was created by astronomer and weather-watcher David Young, not to be confused with the Old Farmer’s Almanac, which was founded 26 years earlier in 1792 by Robert B. Thomas.

“Part of the long-lasting appeal of the Farmers’ Almanac is that it’s nostalgic and charming but it is also useful,” Duncan said. “We just stay current with the times and keep reminding people how to live a natural life.”