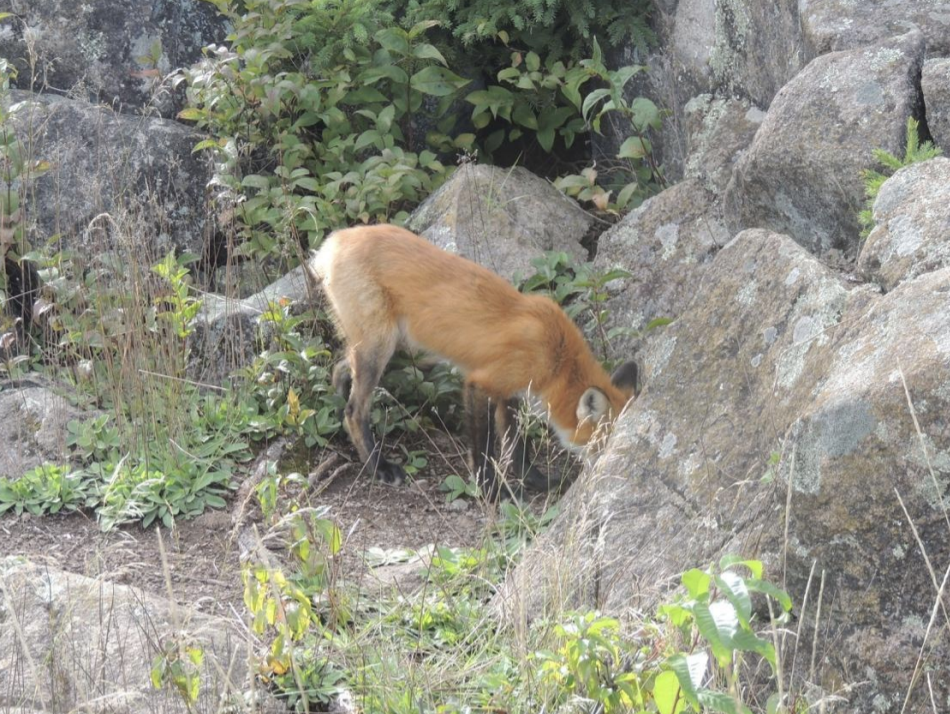 If you’ve ever been to Isle Royale National Park, there’s a chance that you’ve seen a red fox wandering around, including at human-dominated areas such as campgrounds.

You might ask yourself, why would they feel comfortable close to humans?

That’s one question a recent study addressed as scientists tried to learn where red foxes on Isle Royale originally came from.

And the answer to that question remains up in the air.

Discovering the origins of a subspecies can help answer questions about why animals are the way they are, according to the study, “Exploring the Origins of Red Foxes on Isle Royale,” published in the journal American Midland Naturalist.

Known to be smart, red foxes have captured the hearts of many visitors to Isle Royale in Lake Superior, according to the National Park Service.

They’ve also captured the attention of researchers, including Kristina Black, a Ph.D. candidate studying population genetics at the University of Texas at Austin.

Red fox subpopulations exist not just throughout the Great Lakes region, but also elsewhere in the United States, Black says.

However, Romanski says Isle Royale’s subpopulation is genetically different from others since there are indications that at least some of its red foxes were introduced by humans.

That’s exactly what researchers set out to answer: Do the origins of the island’s red foxes lie in human introduction or are they originally from other geographic areas?

Human introduction refers to the practice of importing nonnative foxes for fur farming. Nonnative is the term for foxes that originated from the Prince Edward Island area of Canada, according to Black.

In the 1900s, fur farms sprang up in various parts of America, including Michigan.

When a survey was conducted in 1904, foxes had not yet been seen on Isle Royale, Black says.

In 1922, Bill Lively, a ranger on the island, started a fox farm, and three years later red foxes were first seen on the island. That led to the hypothesis that the foxes on Isle Royale were imported and nonnative, according to Black and the study.

The fur farm industry didn’t last long, however. Black explained that “fur farming kind of peaked in the ‘30s, and then when the industry collapsed, many of the farmers just opened their cages and let them go.”

“The foxes from fur farms were artificially selected to be good at growing fur, so that includes being tame, being farmable,” Black says.

According to Romanski, while red foxes are apprehensive about coming in close contact with humans, they don’t have a problem being around them and often linger around campsites in hopes of finding food.

The trait of adapting well to being around humans, Black says, could be connected to their nonnative origin of being farmed for fur.

In other words, the trait of being friendly with people may have been passed down from farmed red foxes to their current descendants, especially through the process of artificial selection.

To research that potential connection, scientists compared the haplotype in scats, or fecal droppings, from Isle Royale with other haplotypes from elsewhere in the U.S. and Canada.

A haplotype is “a set of DNA variations along a chromosome that tend to be inherited together because they’re very close together,” according to the National Human Genome Research Institute.

Romanski had already collected Isle Royale scats for other research purposes. The other haplotypes came from 2006-08. Black also says haplotypes from other parts of the country and Canada were obtained through samples from museum collections.

A majority of the Isle Royale haplotypes matched those that had been found only in the Prince Edward Island area before, the origin of fur farm foxes. That could suggest that red foxes on Isle Royale today could at least partly have a nonnative origin, Black says.

However, Black stresses, that’s only speculation because there hasn’t been enough sampling across Canada between Newfoundland and Isle Royale.

Such sampling is a massive undertaking and not currently a priority for the researchers, so their origin on Isle Royale will remain speculative until more sampling takes place, according to Black.

According to National Geographic, red foxes weigh between 6.5 and 24 pounds and eat “rodents, rabbits, birds and other small game.” They have red, dark grey, or brown fur and grow 14-20 inches tall, the National Park Service says.

Romanski says one concern about the Isle Royale red foxes is how much food they find at campsites or get from being fed directly by humans.

Another concern currently under investigation is the effect that relocation of wolves from the mainland to the national park, a program started in 2018, will have on the red fox population, including how they use the landscape and other resources, Romanski says.