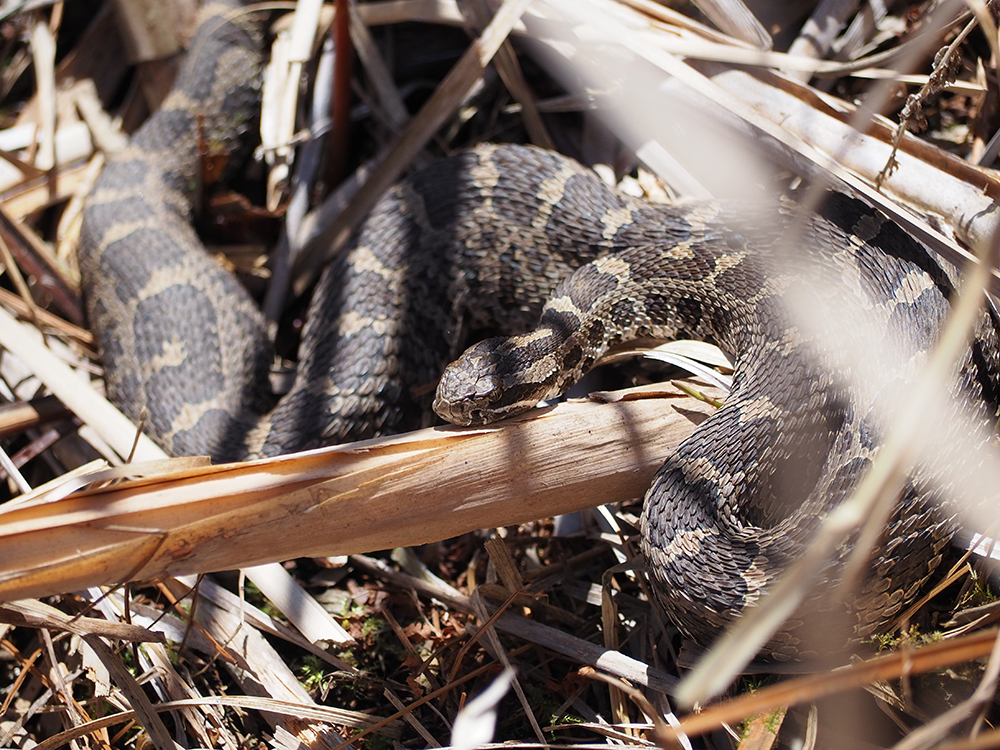 A species unique to the Great Lakes region once had a bounty on its head, but now experts are trying to save it.

Known as the only venomous snake in Michigan — and one of two rattlesnakes in the Great Lakes Region — the eastern massasauga rattlesnake has been listed as threatened under the Endangered Species Act since 2016.

Less than half of the massasauga’s historical population exists, according to the U.S. Fish and Wildlife Service.

“There’s this perceived risk (and) misunderstanding about the snake’s behavior and ecology,” Lee said.

“You know, like ‘the snake’s going to chase after me. It’s going to come after me and bite me and stuff.’ And so I think that perceived risk then gets that added layer on top of the fact that people don’t like snakes and don’t understand the value of snakes.”

But the eastern massasauga is unlikely to chase or bite people, Lee said.

There’s a reason some people don’t know Michigan is home to a venomous snake: Eastern massasaugas are docile, often hide and aren’t likely to bite unless grabbed or stepped on, she said.

A total of 848 individual reports of eastern massasaugas biting humans were made in Illinois, Indiana, Michigan and Ohio between 1800 and 2015, according to a recent study published in Wilderness and Environmental Medicine. That’s about four snake bites per year. While fatalities from the bites were reported by the study, none occurred after 1935.

Lee has surveyed civilians about the eastern massasauga for more than 20 years. There is a range of those who like snakes and want to know about rattlesnakes from a safety perspective and others who think no snake is a good snake, she said.

The small, thick-bodied snake lives in wetlands in all Great Lakes states, Iowa and Ontario, but most populations are in Michigan and Ontario. Michigan is the stronghold for the species, said Dan Kennedy, the Michigan Department of Natural Resources endangered species coordinator.

Over the last two decades, the Michigan DNR has sought efforts to conserve the snake, Kennedy said. By managing state-owned land and that of private partners, the department has preserved millions of acres of land under a conservation agreement, Kennedy said.

Most states had bounties on the snakes in the past, much like wolves, said Eric Hileman, a quantitative ecologist for the eastern massasauga Species Survival Plan.

“I think as years have progressed we’ve seen the consequences firsthand of when we try to remove species that we’re fearful of, and even in those cases, it comes back to bite us,” Hileman said.

However, past bounties aren’t the main reason for population decline.

“I would say the biggest culprit is habitat loss, either simply by removing habitat and converting it to agriculture or urbanizing it, or sometimes in some areas, simply succession,” Hileman said.

Eastern massasaugas live in wetlands. Natural succession may lead the wetland area to turn into forest if there isn’t any fire to keep the trees down and maintain the wetland, Hileman said.

The snakes regulate their temperature with outside sources of heat. A shaded forest doesn’t suit them.

As habitat loss occurs, the massasauga’s range is divided into smaller pieces, sometimes causing the snakes to die while crossing roads, Hileman said.

Hileman has worked with massasaugas for 11 years. He’s handled over 1,000 of the snakes with proper equipment. The vast majority didn’t strike.

“They don’t deserve the reputation that they have,” said Hileman, adding that it’s understandable to be fearful if you live in a state that doesn’t have other venomous snakes.

Some people tend to have a bias towards species that are charismatic and they tend to care more about the conservation of species that are perceived as cute, said Carrie Tansy, the deputy field supervisor for the U.S. Fish and Wildlife Service.

“It’s important to understand that native species, like massasauga, often play an important ecological role within their communities,” Tansy said.

The U.S. Fish and Wildlife Service announced Sept. 23 that it has partnered with state, federal and private agencies to carry out a final recovery plan for the eastern massasauga.

The goal is to stop species decline and ensure long-term survival by addressing habitat loss, according to the release. The plan also addresses impacts from flooding, drought, disease and intentional killing of the snakes.

“If eastern massasauga disappear, it’s one of a kind,” Hileman said. “It will never come back. So I think, from my perspective, that alone is a reason to want to work towards conservation.”