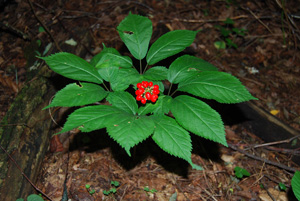 A federal grand jury has indicted two business rivals in Western Pennsylvania for alleged interstate trafficking in wild ginseng, a perennial herb whose root is valued for its reputed aphrodisiac and medicinal properties, including as a panacea or cure-all for some diseases.

The defendants, Dale Smith of Eldred and Shane Trout of Bradford, were named in separate indictments. Both pleaded not guilty at their Sept. 8 arraignment.

“They were competitors who are now both facing similar charges relating to their business practices,” said Assistant U.S. Attorney Paul Sellers, who is prosecuting the cases.

Ginseng is protected under the Convention on International Trade in Endangered Species of Wild Fauna and Flora, a multinational agreement meant to prevent the wiping out of plants and animals with commercial value.

“It has long been used for medicine, originally harvested by many different Native American tribes and used in Asian medicinal products,” according to the U.S. Fish & Wildlife Service, which investigated the cases..

Pennsylvania classifies ginseng as a vulnerable plant, which includes species at risk of decline due to frequent removal from their native habitats for personal or commercial use, according to the state Department of Conservation and Natural Resources.

One indictment accuses Smith of conspiracy to receive, acquire or buy American ginseng plants illegally transported from New York into Pennsylvania. He owns Alleghany Mountain Ginseng and is licensed in both states to buy and sell legally harvested ginseng.

The indictment charges that on “multiple occasions” between 2018 and 2020 Smith bought ginseng that had been transported from New York without the required state-of-origin certification and that he filed false purchase reports in both states. The indictment does not identify any alleged co-conspirators.

His defense lawyer, Stephen Sebald of Erie, Pennsylvania, said, “Ultimately, I believe my case will be resolved with some kind of plea bargain.”

The other indictment charges Trout with trading in ginseng that had been transported from Ohio to Pennsylvania in 2019, also without the mandatory state certification. It also accuses him of submitting a false report about the origin of the ginseng to the Pennsylvania agency.

The lead investigator, Special Agent Randy Cottrell of the Fish & Wildlife Service, declined to comment on the two cases but said his agency handled several smaller ginseng cases in the past six or seven years.

Sebald, Smith’s lawyer, said he doesn’t know whether the charges arose from a broader investigation of ginseng trafficking, but “experience would tell me that when the federal government gets involved, it seems like they’re trying to make examples of people.”

Trout’s lawyer, Leonard Ambrose III, of Erie, said prosecutors have not yet told him the origins of the probe.

“All I have is a barebones indictment that discloses little if anything about the government’s investigation,” Ambrose said in an email