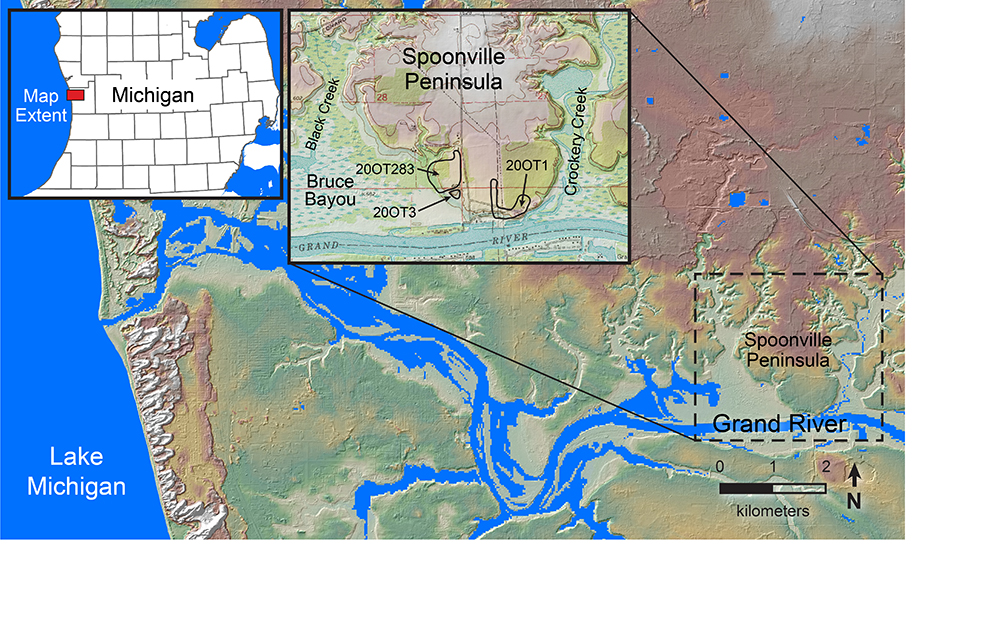 The Spoonville Peninsula and its archaeological site along the Grand River in Ottawa County, Michigan. Image: Michael Hambacher and Randall Schaetzl

You have to look hard to spot the Spoonville Peninsula on a map of Southwest Michigan, but it was an important location for native peoples for centuries before European contact.

The historic archaeological site on the shore of the Grand River in Ottawa County’s Crockery Township may contain the largest collection of Upper Great Lakes cache pits ever excavated.

Underground caches were used to store food as a strategy to increase a community’s chances of “survival, success and regeneration in the difficult environment of the region,” according to a recent study in the Journal of Field Archeology.

Archeologists excavated 29 of about 350 surface depressions on the peninsula as part of a federally funded highway project along the M-231 corridor, said study co-author Michael Hambacher of Archaeological Research and Consulting Services in Williamston, Michigan.

Federal laws and regulations require such highway projects to consider archaeological resources and other environmental conditions, including wetlands and endangered species, he said in an interview.

Cache pits were a way to exploit seasonally abundant resources and extend their availability after storage through the winter, the study by Hambacher and Michigan State University geographer Randall Schaetzl said.

Caches helped mobile hunter-gatherers, who relied on seasonally abundant food sources, to deal with fluctuations in the availability and abundance of critical resources, their study said.

Proper construction and placement of the pits were essential to preserve and conceal food, the study said. That involved specialized knowledge to select suitable locations, decide what to store there and how to construct the caches, including pit linings, wall supports and insulation.

The Spoonville Peninsula is bordered on the east by Crockery Creek and on the west by Black Creek and Bruce Bayou and Black Creek.

“As you go up the Grand River, it’s one of the first substantial pieces of high ground you encounter,” Hambacher said. “You’ve got these great riverine and swamp marsh habitats for resources in close proximity to one another. It’s been a good place to live for at least 10,000 years.” 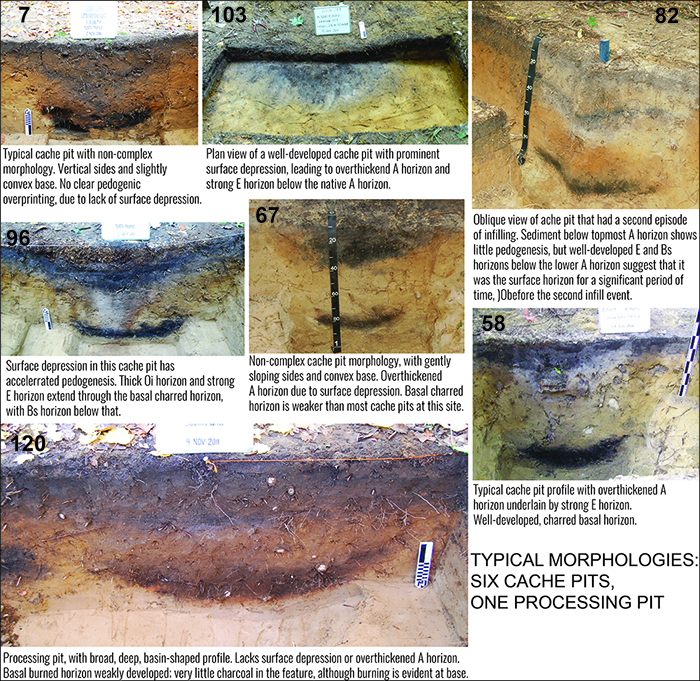 Many caches were constructed along trails and hunting routes in the region.

Archaeologists have found evidence of cache pits in the Great Lakes region dating as far back as about the year 1000, with use intensifying after about 1200.

“The Little Ice Age, with the changing climate, would have created a certain amount of unpredictability in how the resources were distributed across the landscape and productivity from one year to the next,” Hambacher said.

“We think they were basically constructed by individual family groups” and were sized to hold sufficient foodstuffs, materials and other goods, Hambacher said. “Each family probably had multiple storage facilities.”

The study described the Spoonville Peninsula as “an environmentally strategic location for obtaining, processing and storing” locally sourced foods.

There was little evidence that meat and fish were cached, possibly because they were harder to preserve and would be more likely to attract predators that would dig up the caches.

Evidence such as projectile points shows that the site was used sporadically between 6000 and 3000 BC, then increasingly between 150 BC and 1200 AD, as shown by ceramics, tools and other artifacts. The most frequent use occurred during the mid- to late 15th century and ended in the 1600s.

Archaeologists began exploring the site in the mid-1800s when they excavated a burial mound containing artifacts and human remains.

It’s now listed on the National Register of Historic Places.

For example, the study describes how empty caches were deliberately burned and backfilled, but Hambacher says the rationale for doing so – possibly to destroy unwanted, spoiled foodstuffs – is uncertain.

“We’re really not sure.”