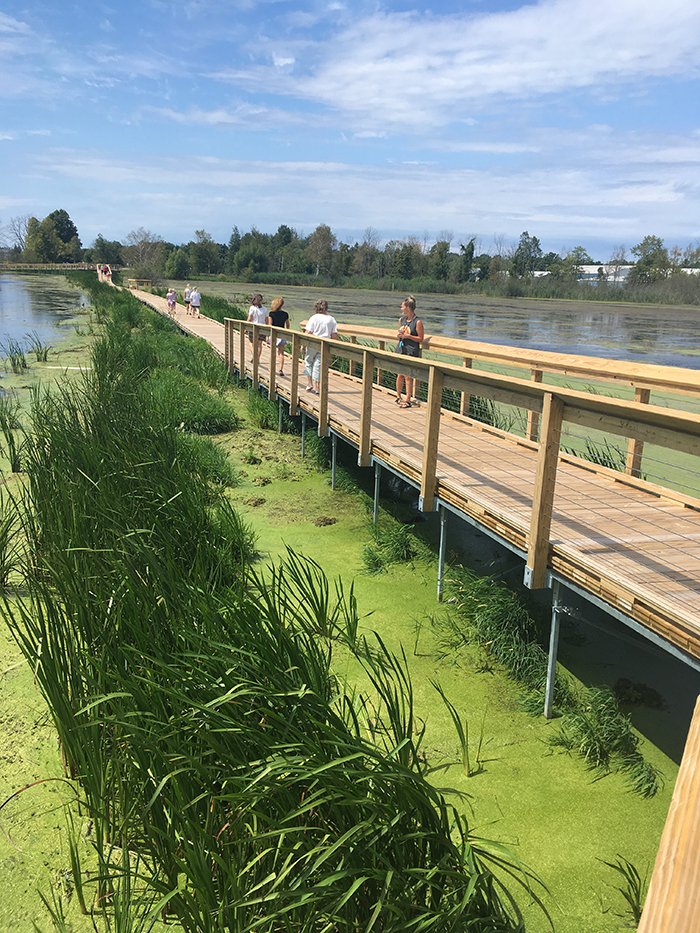 At some point in our lives, we all can use a little help down the trail — aging baby boomers, a toddler, a parent pushing a stroller, an expectant mother, somebody who walks with a cane, somebody else who suffers from asthma.

The days of covering 20 miles with a 30-pound pack on our back might be a thing of the past, but not the desire to spend an afternoon in the woods seeing where this winding footpath takes us.

That’s why what use to be “handicap accessible” is now “universal access” with organizations like the Grand Traverse Regional Land Conservancy pursuing a goal to preserve the outdoors for everybody.

“For a variety of reasons, many people in our community simply aren’t able to go on the hikes or enjoy the outdoor experiences that so many of us take for granted,” conservancy Executive Director Glen Chown said.

“Everyone deserves access to nature, and we’re thrilled to offer universally accessible ways to enjoy some of our region’s best natural attractions,” Chown said.

Universal access was one of the major goals of the conservancy’s Campaign for Generations, a $71.4-million, six-year fund-raising effort that will end on June 30.

But one result of the campaign can already be enjoyed along the M-22 corridor: two of Michigan’s most amazing universally accessible trails, scenic paths that were designed for people with disabilities in mind, but benefit everybody.

Standing on the sandy edge of a perched dune with Lake Michigan spread out beneath you is one of the most cherished experiences along the lake’s Gold Coast. But such scenic spots usually require a hike or even a short walk through the woods, making them off-limits to anybody with physical limitations or even just age — too young or too old.

That was until 2017 when the conservancy unveiled the Overlook Trail in Benzie County.

The half-mile Overlook is part of the preserve’s Baldy Trail system but was a significant upgrade of the existing route.

The new trail features a 6-foot-wide surface of compacted crushed stone and a massive boardwalk. The boardwalk uses switchbacks to gently climb 60 feet through a backdune forest of predominately sugar maples that make it a colorful setting in the fall.

You end at an observation deck perched more than 300 feet above Lake Michigan. The Overlook features several benches, including two rocking benches, along with interpretive displays and a view to the north that encompasses Betsie Bay from Frankfort harbor to Point Betsie.

In the late 1800s, a railroad grade was constructed through Arcadia Marsh in Manistee County, and in the 1950s, the water level was lowered to improve its agricultural potential.

A half-century later, when the conservancy acquired 155 acres of it, Arcadia was a sad remnant of the Great Lakes coastal marsh it once was.

The conservancy coordinated a massive restoration project that focused on returning Bowens Creek to its natural channel through the marsh and creating 6 acres of shallow, open water to benefit migrating birds and spawning northern pike.

In 2019, the conservancy converted a former railroad bed into a universally accessible path that includes 0.75 miles of boardwalk across the middle of the swamp.

The National Park Service is also focused on universal access in this corner of Michigan.

The newest footpath in Sleeping Bear Dunes National Lakeshore is Kettles Trail in the heart of Leelanau County, away from the towering dunes and Lake Michigan shoreline that the park is famous for.

Dedicated in 2019, the 3.4-mile trail loops through an intriguing and rugged area of numerous kettles surrounded by a jumbled array of ridges and marshy potholes.

But the first 1,000 feet of the trail is a fully accessible path with a compacted stone surface that leads to an overlook of a steep-sided kettle.

This leg of the new trail is level. The remainder uses old two-tracks that climb the slopes and ridges, some with a more than 20 percent grade.

Jim DuFresne is a MSU Journalism School alumnus and the author of The Trails of M-22 (MichiganTrailMaps.com).