“It was packed. It was absolutely crazy busy packed,” Sproule said.

While Pictured Rocks Cruises ran at half capacity, everything from the cruise’s ticket office to nearby downtown Munising was packed, Sproule said.

“Kayakers? Tons. Hikers up on the top of Pictured Rocks? Packed. It was busy, there were people everywhere,” she said.

Four of the 14 destinations managed by the National Park Service in the Great Lakes basin hit record numbers of visitors in 2020, according to that federal agency.

Five destinations saw an increase in visitors. Together they welcomed more than 1.26 million additional visitors in 2020 than in 2019. 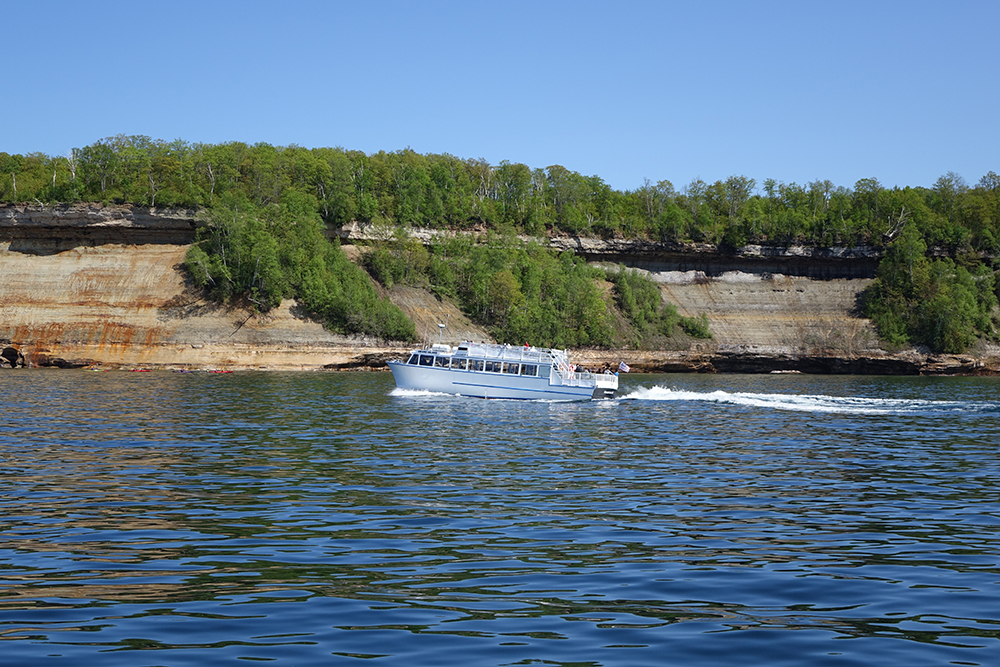 As a whole, visitors to destinations in the Great Lakes basin increased about 13% from 2019.

While the pandemic led to increased visitors at some sites, others lost out. Where most National Parks and Lakeshores welcomed more visitors, national monuments, memorials and historic sites welcomed less.

But Pictured Rocks National Lakeshore had another record-setting year in 2020, its fifth since 2015, and the greatest increase in the region. Visitor numbers were up 41% from 2019.

“Our infrastructure was not built to handle this kind of volume of people… It caused a lot of resource damage,” Reece said. 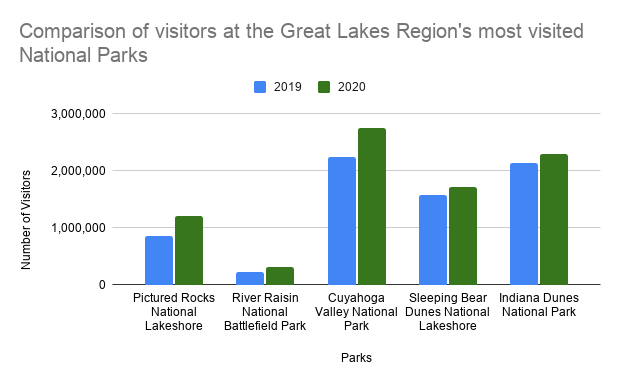 The surge in visitors strained the park’s failed septic system. While park officials planned to fix the system during the summer, the pandemic hindered access to contractors, Reece said. The park spent tens-of-thousands of dollars pumping the toilets at Miners Castle to ensure visitors could continue to visit the rock formation.

Park employees expect the same number of visitors or more in 2021, Reece said.

Park officials want to improve the Buckeye Trail, to protect plants and make it safer for visitors.

“When trails are icky and muddy (people) just walk around (them), and then they’re trampling resources and widening trails,” Barnes said.

While officials are happy more people are finding and enjoying national parks, the increased visits impact the resources in need of protection, she said.

Park officials are asking the public for ideas to improve it. Future plans include adding campsites and repairing river access sites for people looking to paddle to Cuyahoga River. 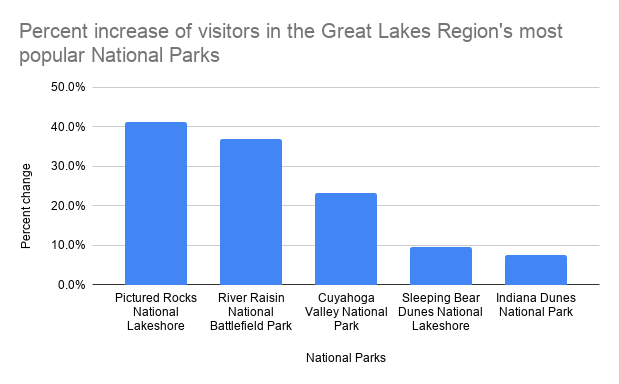 Barnes expects to see a similar number of visitors in 2021. On the first warm weekend of April, the park was as busy as you would expect on the Fourth of July, she said.

Come on weekdays to avoid crowds, she said.

While the pandemic prompted travel to some National Parks, it kept visitors away from others.

In 2020, attendance at Isle Royale National Park dipped about 75% from the previous year.

That’s because the park delayed opening from mid-April to the end of June and did not provide ferry service during 2020, said Liz Valencia, supervisory park ranger and public information officer at Isle Royale.

The only way to visit the park was by private boat or seaplane, Valencia said. Many visitors came in smaller groups.

The island’s only overnight lodge and restaurant, Rock Harbor Lodge, was shuttered for 2020.  It limited activity to selling gas to boaters and supplies to campers, Valencia said.

While visitors at Isle Royale decreased, Valencia said she saw an increase of first-time visitors that could benefit the National Park Service.

“Everytime we have new visitors coming to parks, appreciating them, thinking about how valuable they are in their lives, we’re raising that next generation of park stewards,” she said.

While Valencia expects visits to increase in 2021, visitors are limited by the available transportation to the isle. While the two Michigan ferries are running this year, social distancing means they run at 50% capacity, Valencia said.

“For another summer, I do think parks are going to be a real destination for a lot of visitors,” she said. “I think we’ll see it all over.”