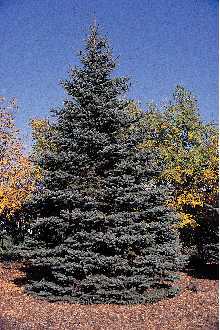 Disease and a newly identified fungus have been killing Michigan’s blue spruce population for roughly a decade, and the dangers show no signs of slowing.

Symptoms of the fungus known as diaporthe include branch die-back that moves up the tree and sometimes kills it, said Jill O’Donnell, a Michigan State University Extension senior agriculture and agribusiness educator, said.

Diaporthe was first identified in blue spruce during studies done from 2011 to 2018. The findings were published this year.

“The problems tend to be in older trees, but we did see some problems in the Christmas trees,” O’Donnell said.

O’Donnell said researchers found the fungus when they noticed cankers– dead sections of bark on branches or trunks — of infected trees.

“We surveyed spruce where we saw these declining issues and cultured the cankers that we found,” she said. “That’s how we discovered the diaporthe.”

According to O’Donnell, the blue spruce is native to the Rocky Mountains, “where the climate is much cooler and there are much drier conditions,” so conditions in Michigan were already challenging for the trees to thrive before the fungus.

“When we move them to the East, we have wetter, more humid conditions so we see more fungal pathogens.,” she said.

Additionally, blue spruce are often planted close together, creating conditions that cause diseases, such as needle-cast, that causes needles on lower branches to “turn purple or brown, die and drop off the stems,” according to an article published by Michigan State University Extension.

“The needles are usually wetter longer, the wind can’t move through trees that are close together and sometimes there’s shade that creates more humid conditions,” O’Donnell said.

“We used to sell truckload after truckload of them and we sell very few anymore to landscapers,” he said. “We still sell a few for Christmas trees.”

Wahmhoff said that he sells other species instead.

“We sell a lot of Norway spruce, a fair amount of white spruce, and some Black Hills spruce. These other spruces don’t seem to be susceptible to the fungus,” Wahmhoff said.

According to Wahmhoff, the fungus primarily affects older trees, so the blue spruce in his nursery are healthy.

“It’s really not a problem for blue spruce until they get to be about 15 to 20 years old,” while Christmas trees are usually grown until they’re around 7 to 10 years old, he said.

Wahmhoff said his nursery also sprays its trees with pesticides and fungicides regularly, which keeps them healthy.

Scott Van Wyk, an arborist at Bartlett Tree Experts in Grand Rapids, said there are ways to treat some infected blue spruce.

“The course of treatment at this point is three to four spray treatments in the late spring through summer or even into fall, and done on an annual basis,” Van Wyk said. “Typically we provide a new spray job on trees that are moderately infected or mildly infected, as opposed to severely infected.”

According to Van Wyk, most needle-cast diseases affecting spruces are airborne.

“The spores are released in wet weather at the time that trees are growing, which is typically late May. From that point through even September, there are documented spore releases,” he said. “Spruces of every size are infected by some kind of disease –it’s just a matter of degree at this point.”

Van Wyk suggests that owners fertilize trees regularly and remove lower limbs, which tend to be the most diseased.

“Doing so not only improves the appearance, but also helps with airflow underneath the tree which keeps them dry,” Van Wyk said.

Wahmhoff said, “Trees are like people. If you’re eating well and taking vitamin C, you’re not going to get sick, but if you’re eating bad and not taking care of yourself, that’s when you get sick.”

“It’s the same thing for plants. If kept healthy, they can fight off disease better,” he said.