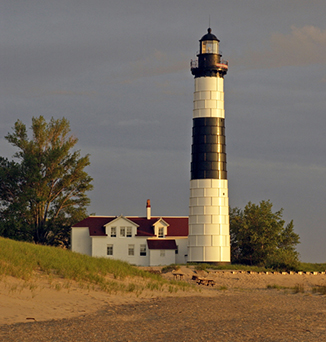 Despite financial challenges, Michigan lighthouse boosters are eager to move forward with restoration plans this year.

Among those with plans to kick off restoration projects or fundraising efforts are the Big Sable Point Lighthouse in Ludington, Marquette Harbor Lighthouse in Marquette and Muskegon South Pierhead Lighthouse and the Muskegon Breakwater Light in Muskegon.

With lighthouse repair already an expensive task, the COVID-19 pandemic is posing significant obstacles for those who work to preserve them.

The state has over 120 lighthouses, according to Pure Michigan, the travel and tourism promotion arm of the Michigan Economic Development Corp.

Built in 1867, the Big Sable Point Lighthouse is also one of the tallest lighthouses in the state — measuring over 110 feet.

The Sable Points Lighthouse Keepers Association, which manages the Big Sable Point Lighthouse, plans to proceed with restoration and fundraising.

A multitude of repairs are needed to restore it to its former glory.

According to the association, they include repainting the tower, restoring rusted sections, and replacing the roof and more than 700 original bricks.

“If you look at it, everything appears fine and structurally sound,” said Peter Manting, the association’s executive director.

However, the tower has 139 holes caused by rust, he said. Patches must be welded on to repair the holes.

“A lot of our funding is from people going through the tower,” Manting said. “The Coast Guard takes care of the lighting. They do not provide the funding for the maintenance.”

“We lost about 90 percent of our revenue last year. However, we are very focused on getting open for the season” on May 10, Manting said.

To help fund restoration plans, the association has created a campaign called “Leave a Print in the Sand.” The goal is $225,000, with about $165,000 raised so far, according to Manting.

The Marquette Harbor Lighthouse, which was rebuilt in 1866, is one of the oldest sites in Marquette.

“There is quite a bit of restoration work needed on the lighthouse,” said director Hilary Billman of the Marquette Maritime Museum, which offers interpretive tours of the lighthouse from May through October.

The Coast Guard turned over the deed to the city in July 2016.

According to Billman, the museum paid for a new roof—when the building was still owned by the Coast Guard— because a leaking roof caused water damage on the second floor which remains inaccessible for tours because the ceiling is coming down in places.

“Every wall needs to be painted and the lighthouse tower needs to be scraped and painted,” Billman said.

The front and back doors and some windows also need replacement.

“We do not have an exact price on restoration fees, but the city does have an account set up for lighthouse expenses,” Billman said. “When the museum does tours, we give half of the ticket price to the city to go in this fund.”

There’s no date scheduled yet for the restoration work, and the city needs approval from the State Historic Preservation Office, “which is a lot of time and paperwork,” she said.

“We have been patiently waiting for the city to begin restoration,” she said. “COVID-19 set everything back, but hopefully things will happen soon. When we hear from the city that restoration can begin, we will consider other fundraisers,”

The Michigan Lighthouse Conservancy — which owns both lighthouses —  is eager to move forward with restoration despite the expenses.

“Last fall, we did a lantern room restoration on the Muskegon South Pierhead,” said Jeff Shook, the conservancy president.

“A lot of the metal inside needed to be replaced that couldn’t be patched, and we stripped off all the lead paint inside the room,” he said.

“Most of these lighthouses are big projects,” Shook said. “We need to raise some significant funds.”

According to Shook, it will cost about $750,000 to completely restore the Muskegon South Breakwater Lighthouse,

Shook said equipment such as a crane and lifts is needed because the lighthouse is at the end of a pier.

Due to the pandemic and local financial challenges, Shook said the association didn’t feel it was the right time last year to ask for donations. However, he said he remains optimistic that the conservancy “can relaunch it in the next couple of months.”

“I definitely have lighthouses in my blood,” Shook said.

Jeff Shook said that he is a relative of Catherine Shook —  who was the first female lighthouse keeper in Michigan.

When her husband unexpectedly disappeared on a boat trip, Catherine Shook took his place as the keeper of the Pointe aux Barques Lighthouse, Jeff Shook said.

According to the state Historic Preservation Office, more than $126,000 in grants have recently been awarded to the Fort Gratiot Lighthouse in Port Huron, the Crisp Point Lighthouse in Newberry and the North Manitou Shoal Lighthouse in Leland.

The grants will help to fund restoration plans.

One thought on “Lighthouses plan to pursue restoration plans”