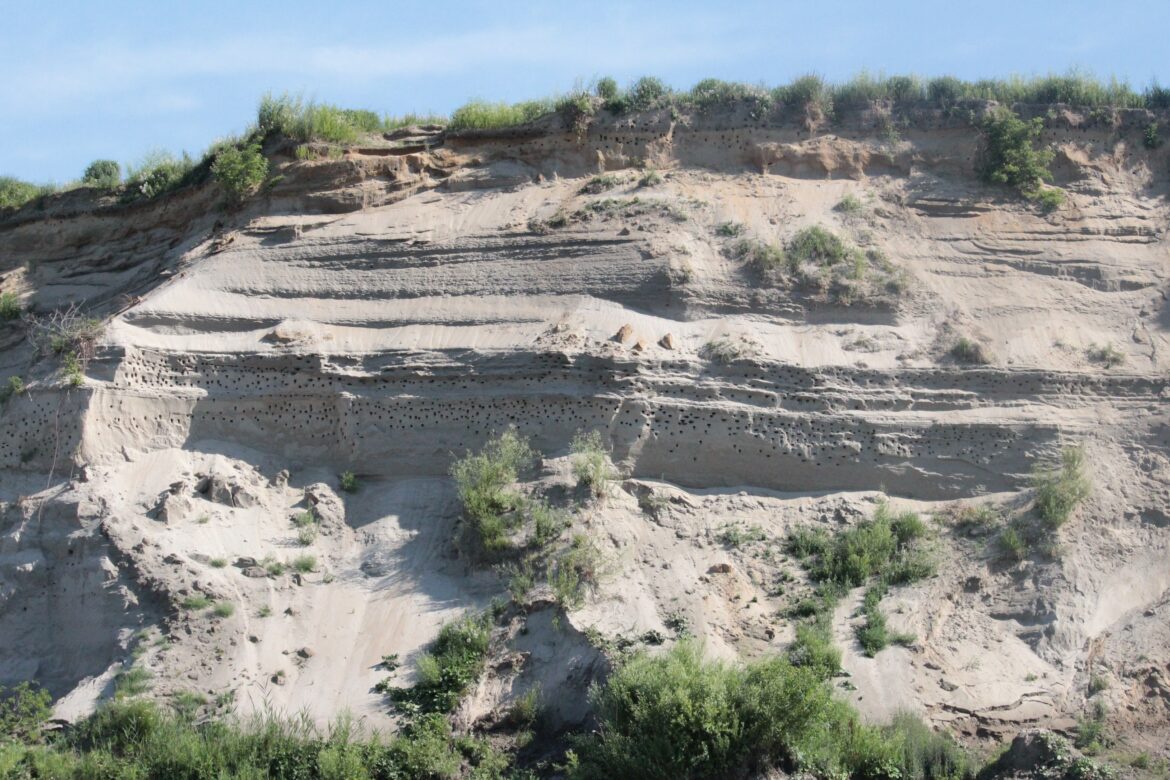 The nesting burrows of roughly a thousand bank swallows during the summer of 2020. Image: Kaelyn Bumelis

Scientists are looking at the diet of bank swallows to understand what is causing their population decline.

Bank swallows are common across all continents except Australia and Antarctica, but they have mysteriously declined in North America since 1970, according to the Cornell Lab, a bird research laboratory in Ithaca, New York.

Bank swallows are a threatened species in Canada, which means they are not endangered, but could be if they continue to decline. In the U.S., their nesting sites are protected under the Migratory Bird Act, according to the U.S. Fish and Wildlife Service for the Midwest region.

In a recent study, researchers Keith Hobson and Corrine Genier found bank swallows living near the shores of Lake Erie had better diets than those living further inland.

“At the lakeshore, they are consuming more aquatic emergent insects than inland. And we think that is benefiting them,” said Hobson, a professor of biological and geological sciences at Western University in Ontario, Canada. “It’s only been recently, the last 15-20 years, where these birds have moved inland.”

A combination of factors might be causing bank swallows to decline, said Kaelyn Bumelis, the aerial insectivore program coordinator at Birds Canada, a conservation  organization. Scientists don’t know what is causing their decline, but there are theories, she said.

“Those include climate change, habitat loss and changes in the aerial insect populations,” Bumelis said. “But it could be likely that it is a combination of those factors.”

Bank swallows are a type of aerial insectivore, which means they eat flying insects as they are flying, Bumelis said.

Birds Canada has observed bank swallow colonies along Lake Erie for a decade, Bumelis said. Before they help their population increase, they have to help stabilize the bank swallows’ puzzling decline, she said.

To understand if their diets played a role in their decline, Hobson and Genier looked at bank swallows’ DNA and feces. They found bank swallows living near Lake Erie eat more aquatic insects, meaning they had better diets.

Using nutritional landscapes, which focuses on the diets of wildlife in certain areas, is a new way to understand why bank swallows are declining, Hobson said.

These swallows do well further inland, but not as well as they could near the shore, Hobson said. This shows there is a nutritional consequence for bank swallows nesting inland.

Bank swallows mostly nest along lakes and rivers, but have begun nesting in mining pits where the ground has been excavated. These birds prefer a vertical face of land to burrow and nest in, like eroded shorelines, Bumelis said. Excavated pits create this structure.

Bank swallows are protected by law, said Genier, a doctoral student at Western University. People are not allowed to disturb their breeding colonies if they nest inside pits.

Often, their nests aren’t disturbed in the pits, but construction continues around them, Genier said. To help these birds, continued work near the nests could be deterred.

To discourage the bank swallows from nesting in pits, Bumelis said workers could dig pits with that are not steeply vertical.

Humans can help bank swallows and other species living in or near Lake Erie, Genier said. One way is to avoid polluting the lake to help insects that come from the water thrive, she said. This can help feed bank swallows.

The Ontario government has funded programs to help at risk species, said Gary Wheeler, a public information officer at the Ontario Ministry of the Environment, Conservation and Parks.

“Since 2015, the Ontario government has provided over $1 million in funding towards species at risk stewardship projects striving to benefit Bank Swallow and other species that inhabit the same ecosystem,” Wheeler wrote in an email.

It’s important to remember that the health of a lake affects the species around it, even those on land or in the air, Hobson said.

“A bank swallow is not a duck. It’s not a water bird,” Hobson said. “…But it is a bird that’s benefitting tremendously from what the lakes are producing, even though it’s nesting on land and it forages in the air.

“So, the message I would say is we’re very concerned about the health of these lakes.”