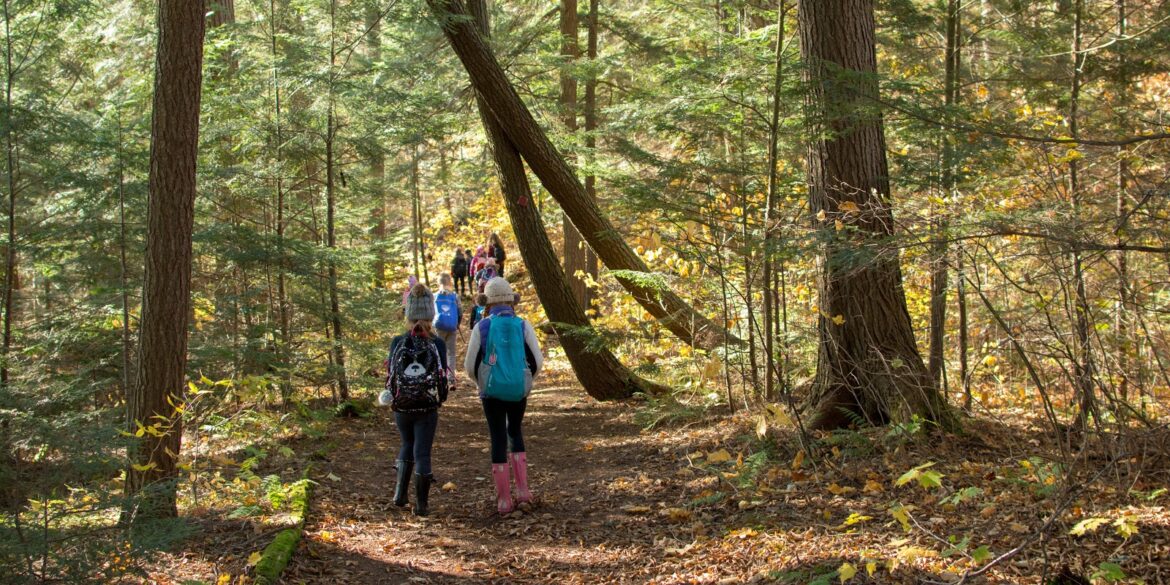 Students in the forest. Image: Cambridge Farm and Forest School.

Classrooms have been looking a bit different for some students in the Great Lakes region in recent months.

With the COVID-19 pandemic and stay-at-home orders forcing people to be cooped up in their homes, schools such as the Detroit Waldorf School in Detroit and the Cambridge Farm and Forest School in Ontario are giving students new outdoor learning options.

The need for alternative options led to Waldorf’s creation of the Outdoor Classrooms Project.

The private pre-K-8 school raised over $50,000 to build 14 outdoor learning spaces on five vacant lots, purchased from the Detroit Land Bank a few years ago.

According to Kelly Baldwin Heid, the director of development at the school, a volunteer crew of parents, grandparents, neighbors and teachers built the outdoor structures by hand over the summer.

“It was such a community-focused project with the goal of getting our students back in person in the fall in a safe way,” Heid said.

The school completed a strategic plan two years ago to figure out how to expand since, at the time, its population of over 250 students was at capacity. 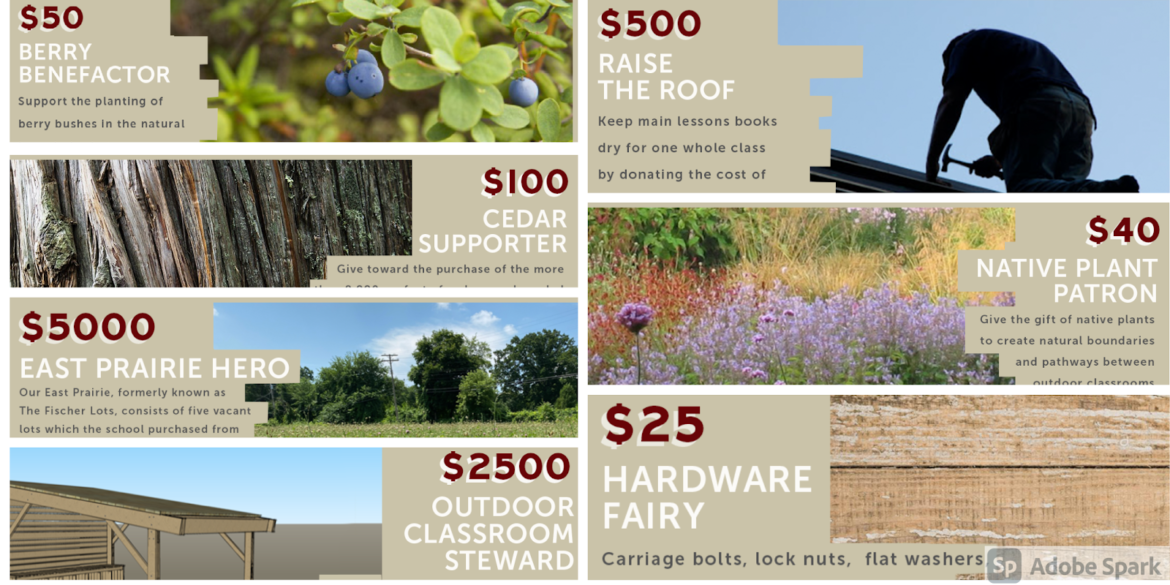 When the coronavirus pandemic began, it didn’t seem like expanding would be possible, but with the help of parents, the school planned, designed and began construction of the outdoor structures.

All 14 learning structures are in use.

According to Heid, outdoor learning such as gardening and farming are a big part of the Waldorf curriculum.

“The natural world is a huge part of what Waldorf holds dear,” Heid said.

She sees the outdoor classrooms as a natural extension of that curriculum.

“It feels like they’ve always been here,” Heid said. “They fit right in with our campus.”

The school still takes safety precautions even when students are outside.

Everyone must wear masks outdoors except to eat or drink. Younger children take masks off during naptime and when they are responsibly physically distancing.

The school still uses indoor classrooms at the discretion of teachers who, for the most part, have made a big push to be outside as much as possible. 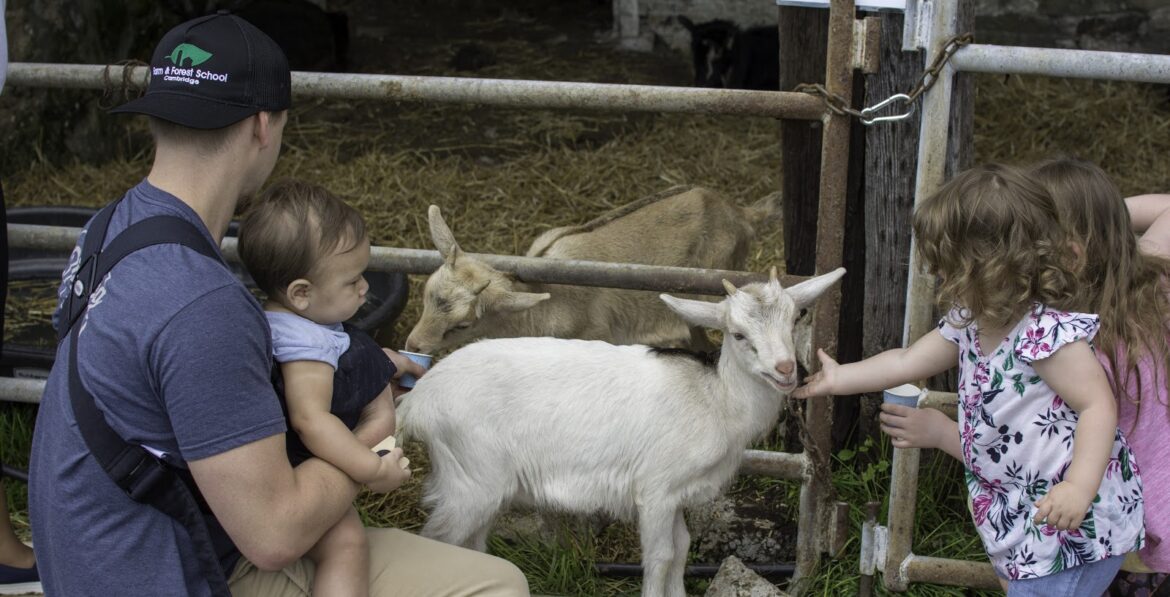 Students will be inside on winter days that they can’t be outdoors.

“We know when winter comes, there will be times we can’t be outside,” Heid said. “It’ll just be too cold.”

Heid says the school accomplished its goal of bringing students back safely.

“This gave our community so much hope in a really dark time for schools,” Heid said.

Some schools in the region were created with the outdoors in mind.

The Cambridge Farm & Forest School, a private school in Cambridge, Ontario, that opened last year, has seen increased registrations and enrollment since the pandemic began.

The school’s pre-K to school age program provides an outdoor alternative education for children 2½ to 12 on 150 acres of farm and forest.

“Our programs exponentially jumped,” Dabrowski said. “We’re in the new form of our school and have tried to expand in the ways that seem reasonable and safe for this influx of families interested,” said Heather Dabrowski, the school’s acting director.

Cambridge isn’t an accredited school that gives credits or checks to see if students know their letters or numbers, she said.

Instead, it offers a break from traditional schools and a chance to be outside while teaching life skills in the outdoors.

Dabrowski says one reason parents send their kids is because they are doing virtual learning at home or attend regular school where they’re stuck in physically distanced bubbles.

“They need one day a week where they are just away from the screen,” Dabrowski said. “Active and free and physically moving their bodies.”

The schedule is much different than a typical Monday through Friday since students don’t attend five days a week.

The programs are designed for students to attend one or two days per week around their regular school schedules with before and after school care available.

Students learn responsibility when they take care of the animals, critical thinking when they build a ship out of wood and problem-solving and communication when they interact.

At least an hour a day is animal time with the sheep, feeding the alpacas or cleaning out the chicken coop.

“They jump out of the cars when they arrive here,” Dabrowski said. “They sort of feel like they’re playing all the time, but of course we know that there is learning going on.”

The school operates on the premise that they’ll be outside as much as possible, but unplanned weather occurrences might force students inside the schoolhouse or barn.

Because the program is typically fully outside and students can physically distance, the program doesn’t have a rule for wearing masks outdoors. Inside, students and teachers are required to wear them.

According to Dabrowski, research shows that being outside reduces anxiety, helps with depression and teaches students about their environment, which means they grow to love their environment.

“If we’re not out in those spaces, then how can they ever feel connected to it?” Dabrowski said.