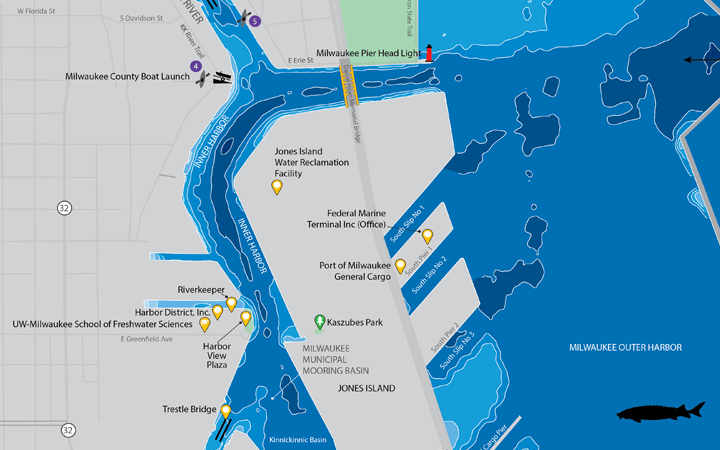 After four years in the making, a set of maps has been created to show what lies underneath the water in the Milwaukee Harbor and what restoration efforts could help get the harbor removed from the U.S. Environmental Protection Administration’s list of heavily contaminated Areas of Concern (AOCs).

Researchers from the University of Wisconsin-Milwaukee said in a press release that the project is a model for developing a tool to help improve the health of other harbors.

Brennan Dow, a water resources management specialist for the Wisconsin Department of Natural Resources (DNR), said that the main priorities for the Milwaukee Estuary AOC include remediation of contaminated sediments in tributaries and nearshore waters of Lake Michigan; nonpoint source pollution control, improving water quality for recreation and enhancing fish and wildlife habitat and populations.

“There was a research need for some fish species within the harbor with regards to managing them. There is a native population that is reproducing within the harbor that no one necessarily knew about, perch specifically,” Dow said.

Dow said he and researcher John Janssen applied for a grant to the Fund for Lake Michigan for funding and got pretty good reviews, but the fund suggested that they look at all fish habitat.

In 2016, Janssen, a professor in UWM’s School of Freshwater Sciences, and Dow, his then-graduate student, received roughly $6,000 from the fund and the DNR, the release said.

The two combined side-scan sonar, a method of gathering information about the depth and physical composition of the waterbed, with diving to identify the locations and activities of fish populations.

State agencies and nonprofits were also interested in maps to help them decide what AOC projects to undertake.

Kim Beckmann, is a UWM associate professor of design & visual communication, gathered and translated the data they collected into maps with illustrations and text so that the information could be shared with the public.

The research team working on the harbor habitat project reached out to the Department of Urban Design, where Beckmann teaches.

She said she practices as a fine artist, but also as a graphic designer, and some of her work has a map-like quality about it.

“In design, it’s like data visualization and storytelling. So I’m taking their research and I’m putting it in a form that people can understand, and not just the scientists that have conducted the research,” Beckmann said.

The maps are available online and next to the harbor shore. They are also being distributed in many public schools and displayed at Discovery World, a science and technology museum in Milwaukee, Beckmann said.

Beckmann said the maps can be used to see what’s living and thriving in the AOC.

Beckmann created two types of maps, one of them for the public. The others are scientific, with hard-core data that Army Corps of Engineers and the Wisconsin DNR can access for restoration projects.

“What was really interesting about the research project was the discovery of novel habitat,” she said.” In one area of a canal, for example, gravel from a parking lot had been pushed into shallow water.

“It became a spawning area for fish,” Beckmann said.

Based on findings from the maps, some harbor restoration projects may add rocks to support more spawning areas.

Dow said he appreciated being able to sample the entire shoreline of the Milwaukee Estuary and acquire a better understanding of native fish habitat for future habitat development.

Beckman said they are creating maps for four more harbors up north.