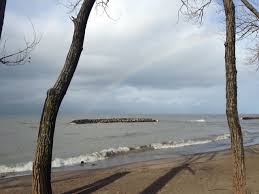 After more than two decades of cleanup and community efforts, Lake Erie’s Presque Isle Bay became the second heavily contaminated place in the United States to be removed from the Great Lakes toxic waters list.

And now a state park on its shore is breaking record attendance levels.

Since Presque Isle Bay was designated an Area of Concern (AOC)—a location that has experienced major environmental degradation—officials have worked to remove pollutants out of the water and people back into it.

The park is about a 3,200-acre sandy peninsula that arches into Lake Erie. It’s the only Great Lakes shoreline state park in Pennsylvania, and research has shown it’s the most visited one in the state.

“People cannot believe it’s not an ocean, but just a big vista of water,” Desarro said.

The Environmental Protection Agency (EPA) classified Presque Isle Bay as a Great Lakes AOC—one of 43 in the U.S. and Canada—in 1991 due to fish tumors and polluted sediment. For a site to be delisted, water quality must improve, and the pollutants in the water cannot be harmful.

New data is needed to prove that the body of water doesn’t have any impairments and that the conditions are safe, according to the EPA.

Presque Isle Bay has an unusual formation which has contributed to more environmental problems that led to the initial listing in 1991, said Timothy Bruno, the chief of the Office of the Great Lakes in the Pennsylvania Department of Environmental Protection.

“Despite these factors working against the bay, it was the community’s mission to make our only piece of the Great Lakes a top attraction again,” Bruno said. “We recently just discovered that the fish tumors were normal in areas of clean water, but the heavy metals and other pollutants were our biggest concerns.”

Manufacturing facilities around the bay discharged waste-water into the lake for decades, which led to heavy metals being found in the sediment. Another problem was overflowing of sewage that resulted in high concentrations of polycyclic aromatic hydrocarbons, which are harmful contaminants that affect wildlife, officials say.

The major source of pollution was the waste disposal practices before state and federal regulations were enforced.

The Erie Sewer Authority spent over $100 million to enhance its wastewater treatment system to reduce sewage entering the bay. Local industries moved away from the city’s shoreline to reduce harmful runoff that would enter the water.

The Great Lakes Restoration Initiative funded Presque Isle Bay $5.3 million to accelerate the cleanup, according to the EPA. The restoration initiative is an investment fund targeting the biggest threats to the Great Lakes ecosystem.

“The cleanup included testing of the bay sediment, restoration work in streams that drain into the bay, more permeable surfaces that catch polluted runoff rather than paved areas and a promise by the community to keep this area off the list,” said J. Michael Campbell, the chair of the Presque Isle Bay Public Advisory Committee.

There have been ceremonial swims to celebrate the bay’s clean water and raise money to increase public awareness about pollution.

Bruno said, “Through hard work and commitment, we identified a remedial action plan which consisted of hands-on involvement and periodic studies after the delisting.”

“We do sediment sampling every few years and continuous water sampling. We make sure what flows into our water isn’t harmful, which is a promise our community made in 2013,” Bruno said.

Today, the bay sustains a diverse aquatic wildlife with over 700 species of plants. What once was a barren place is now filled with millions of visitors a year.

The most popular activities at the park are swimming, biking, hiking and fishing. According to Desarro, the nature trails reel the tourists and locals in the most.

“This past year with the pandemic, our numbers are higher than they have ever been. People are seeking nature and the outdoors to enjoy themselves. There has been a huge increase in hiking, biking and more,” Desarro said.

“When Presque Isle was on the AOC, I noticed a change in the attendance numbers. It was on the list for quite a while which left the park pretty desolate, but now it is unbelievable,” she said.

“It is very encouraging that a huge problem like a listed area of water can go from being filled with dangerous pollutants to becoming the top tourist attraction. This wasn’t a lone effort, but through the efforts of local people and their perseverance,” Desarro said.

“It keeps me hopeful because many times when people think about issues in the environment, people feel hopeless. However, seeing Presque Isle Bay improve shows me that with committed people working toward a goal, it can be a success story,” she said.