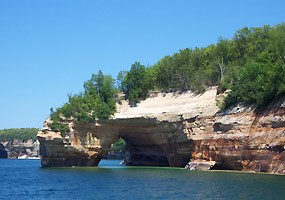 Michigan outdoor recreation-related companies are struggling to stay afloat amid the fallout from COVID 19.

“There’s going to be a lot of sacrifices throughout this time and the sacrifices are needed,” said Jon Swenson, director of community services at Marquette, a community that relies on tourism and other outdoor businesses.

Michigan Gov. Gretchen Whitmer has limited gatherings to 50 people and banned sit down dining. On Monday she ordered that all non-essential businesses to keep their employees home for at least three weeks. While take out remains an option, tourist towns are especially struggling.

“Not all the restaurants, not all of the businesses in town, not all the hotels could exist if it wasn’t for tourism,” Swenson said.

Towns bordering state parks and other natural attractions could be hit the hardest. National parks like Pictured Rocks and Sleeping Bear Dunes balloon the population of nearby towns.

“[State parks] are very big contributors to the local economies, particularly in the rural parts of the state,” said Ron Olson, chief of parks and recreation for the Michigan Department of Natural Resources. If travel restrictions like what we’re seeing around the world goes into effect, it could hurt business near these parks.

Also hurting are outdoor retail stores that rely on face-to-face selling and account for 46,000 Michigan jobs, many at mom-and pop shops, said Brad Garmon, director of the Michigan Office of Outdoor Recreation Industry.

And ski resorts have closed early.

State parks and trails are still open. Olson said he hopes people who wouldn’t normally visit use their time off to enjoy them while practicing social distancing.

“Being outside is a good alternative [activity] if it’s being done utilizing practical safeguards,” he said.

Marquette is a popular destination for camping and outdoor events put on by the city.

The city has already cancelled or postponed many, including the Way Up music festival and Hope Starts Here Challenge, a half-marathon that raises money for brain cancer research,  Swenson said.

“We’re hoping through rescheduling we can get these into a time that works a little better for the public,” Swenson said.

“Michigan’s outdoor event calendar is typically really full, and finding a weekend to squeeze in a rescheduled event can be challenging,” Garmon said. “Many people who made travel plans might not be able to change them to fit the new event.”

Unlike many regular shops, outdoor recreation shops tend to thrive on face-to-face interactions where experienced outdoorsmen can give advice, Garmon said.

“While the outdoors can be a great place to find solitude, the outdoor industry itself is often driven by community connections – the weekly group bike rides, the camping trips, the organized races and rides and runs that are being canceled or postponed,” he said.

Garmon said he and state workers are coming up with a plan to help workers hurt.

“I’m planning to share some best practices and ideas for creative ways that outdoor retailers are surviving and generating some level of revenue during the immediate crisis,” Garmon said.

There could be lasting consequences if the coronavirus sends the U.S. into a recession, he said.

Boat and RV manufacturing are large contributors to the Michigan economy that depend on discretionary spending and would take a hit if the economy struggles.

“The uncertainty in the overall economic market during and following the crisis could potentially have a long-term impact,” he said.

Mike Post, who oversees the bell staff and valets at Boyne Mountain in Boyne Falls during the ski season, has already felt the sting of business closures.

Boyne Mountain closed the resort March 16. Employees were paid for the hours they would have worked for the remainder of the pay week, Post said.

Boyne also told employees to ask for help if they need it because of the season ending prematurely, Post said.

In the summer, he works at another Boyne resort, Bay Harbor in Petoskey.

The closure happening toward the end of the ski season won’t hamper him financially too much, but if the golf course isn’t able to stay open in the spring and summer, he will be in trouble financially, he said.

“Had [the closure] happened in January, it would be tremendously difficult,” Post said.