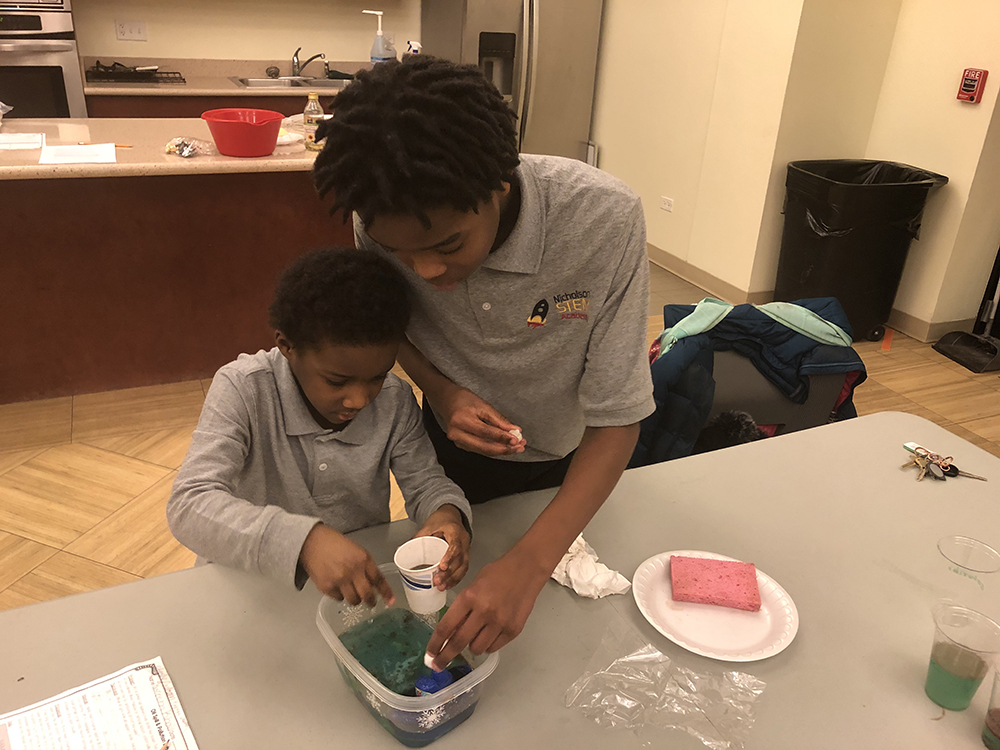 ENGLEWOOD, ILLINOIS – Nearly every hand in the room flies up when Tamisha Gamble asks for a volunteer.

Imagination Explorers is doing its weekly environmental activity. The group of 6-12-year-old’s are learning about oil spills from the Hope Manor II office building, which is part of a Volunteers of America program that aims to provide affordable housing for veterans in the area.

“They’re very excited about the activities, they’re very engaged in the activities,” said Sierra Jones, program coordinator for Imagine Englewood If, the umbrella organization for the program. “They sometimes put their input on ideas that we should do for them.”

For the next hour, Gamble guides the students from Chicago’s southside through an experiment. They remove “oil,” a mix of vegetable oil and cocoa powder, from water using a spoon, cotton balls and a sponge. Throughout, Gamble talks about the harm caused by oil spills.

When Imagine Englewood If’s programs were restructured about a year ago, organizers focused on teaching kids about the global and local environments, said Gamble, the program’s manager.

“At school, they’re not learning much” about the environment, Gamble said. “That’s the problem.”

Past projects include building birdfeeders out of water bottles and learning to grow food in raised beds or cups, Gamble said. Growing it directly in the ground is out because the soil is lead poisoned from past industry.

“I wanted the youth to get to learn [about the environment],” Gamble said. “Then they can go home to their parents and let them know about what’s happening in their soil, in their water, in their walls and in their food.”

Hope is growing on Chicago’s south side. 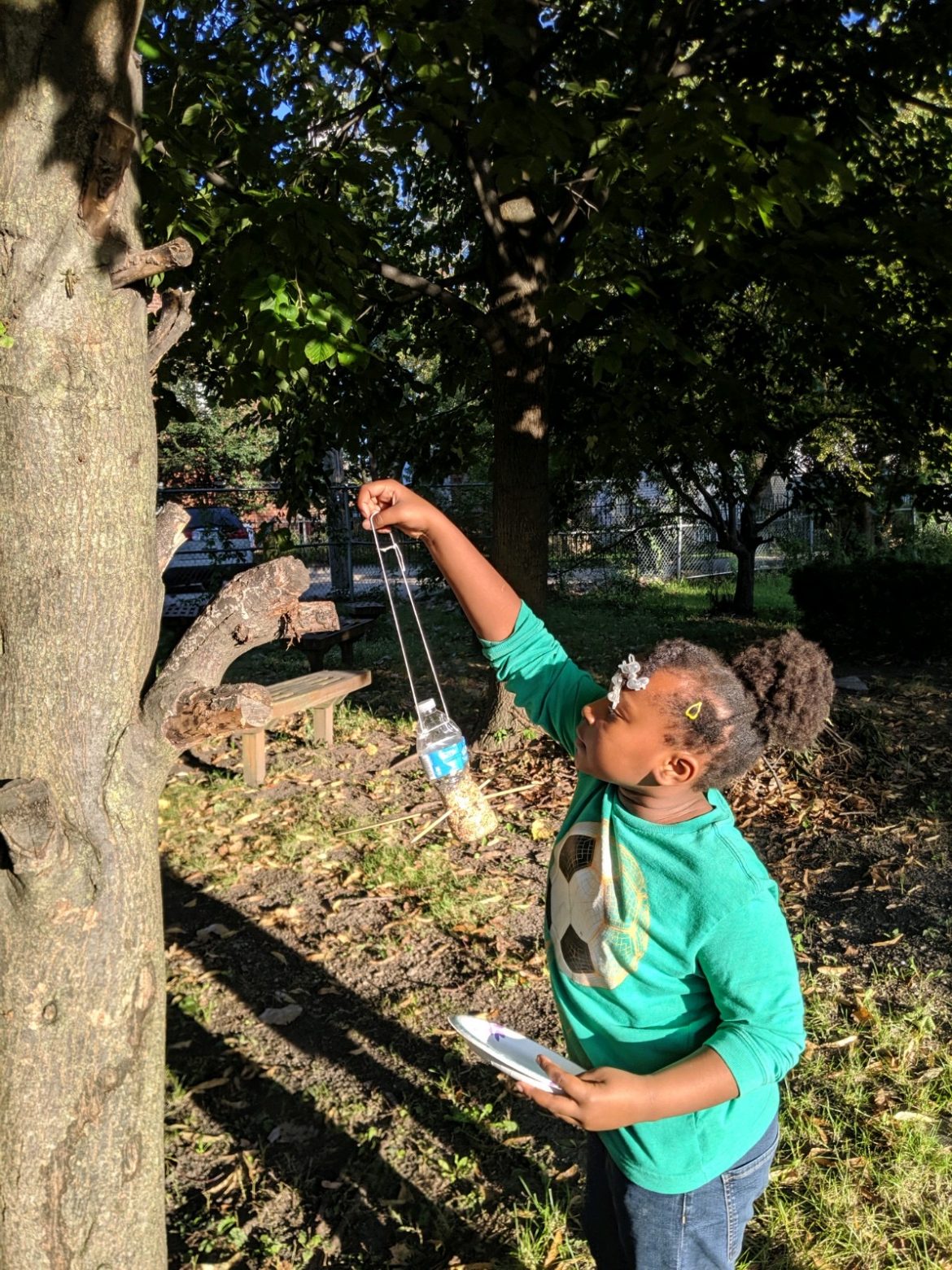 Englewood and West Englewood make up the Englewood area, one of the most dangerous communities in the city. But a band of nonprofit organizations are looking to change how residents interact with their local environment and expand their worldview. Imagine Englewood If and I Grow Chicago each have community gardens that are cultural gathering places, Gamble said.

“When all I see is death, the death of my homes, the death of my lots, the death of cars, the death of people, if that’s all I see, it’s really depressing,” said Robbin Carroll, founder of I Grow Chicago and a CNN Hero nominee. The gardens “bring life back.” In addition to the community gardens, larger farms from the nonprofits Growing Home and Grow Greater Englewood provide healthy food to a community with too few grocery stores, Gamble said.

Farming in urban areas is difficult because land is expensive. In Englewood, since the soil is contaminated, it’s expensive to remove pollutants or bring in new soil to plant in, Growing Home officials say.

Still, progress has continued since its inception in 2002. Growing Home says it harvested 26,309 pounds of produce in 2019.

In 2020, almost another half-acre will be ready for farming, expanding the farm to 1.2 acres. This should yield an extra 8,000 pounds of produce, Growing Home said.

The gardens changed Englewood during her nine years in the community, Carroll said.

I Grow Chicago and Imagine Englewood If each have summer programs to take residents on weekly trips out of the community.

“Sometimes people stay in the area and it’s kind of enclosed, they don’t travel outside” of Englewood, Gamble said. “Their mindset gets belittled because they don’t know that there’s other opportunities to grow outside of their neighborhood.”

“Just getting them outside of their environment, seeing ‘Hey there’s a farm life, there’s different types of careers that people have in the environments that they grow up in,’” Gamble said.

Both summer groups look to beautify Englewood. They pick up trash throughout the summer.

A main goal of I Grow Chicago is turning empty spaces into areas for the community, Carroll said.

So far, the group has purchased six previously vacant lots and two homes and transformed them into spaces for things like gardens and basketball courts, according to I Grow Chicago.

This year, the group will put in a “Nature playlot,” Carroll said.

Everything in the playlot will be recycled or reused from Englewood. A music station will be made up of pots and pans, Carroll said.

The challenge is to reclaim spaces for joy, she said.

And it is a challenge.

The New York University School of Medicine found that Englewood residents die 30 years younger than those living just nine miles north in Streeterville, according to the Chicago Tribune.

A continued focus on healthy foods will help tighten that gap, but Carroll has witnessed a change in the culture as the community grows together.

“This year, we had our first summer camp where we had no shooting on our block,” Carroll said. “We never had to ask our kids to drop, we never had to run them into the house.”

“All of this stuff brings life back,” Carroll said. “That brings hope back.”