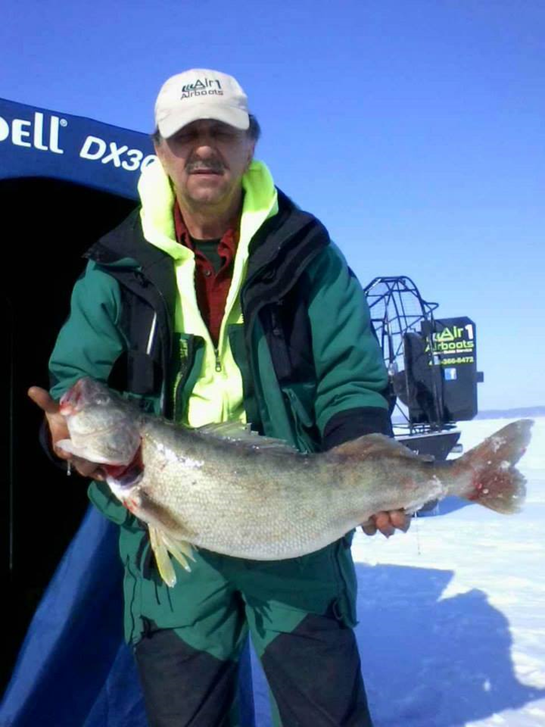 The lack of ice across the Great Lakes region has business booming for those in the ice fishing industry fortunate enough to have safe conditions, but has left others high and dry.

As of Feb. 16, only 14.2% of the Great Lakes had ice coverage, compared to 51.6% the same date last year, according to the Great Lakes Environmental Research Laboratory.

“Four years ago I was fishing seven days a week for months but this year I haven’t been out once and am calling it quits for the winter,” said Tony Muscioni of Air1Airboats, which leads ice fishing charters from Port Clinton, Ohio. Muscioni spends his retirement guiding clients that come everywhere from Massachusetts to Alaska in search of Lake Erie’s trophy walleye.

“Lake Erie’s western basin is the walleye fishing capital of the world and we haven’t had safe enough ice to fish,” Muscioni said. “Ice fishing is my passion, I don’t rely on chartering for my livelihood but local businesses are really suffering.”

Poor ice coverage isn’t confined to Lake Erie. Friends of Muscioni who charter in Lake Huron and Lake Michigan haven’t been able to get clients out fishing either, he said. With so much of the region unfishable, anglers are forced to head north in search of safe ice.

“We’ve seen a huge increase in business from anglers coming from Wisconsin and Michigan’s Lower Peninsula than we have in previous years,” said Mary Beth Defazio, owner of AJ’s Walleye Lodge on Lake Gogebic, in Bergland, Michigan. Lake Gogebic’s shallow depth and Upper Peninsula locations maintains safe ice conditions throughout most of the winter.

“This winter has made for a really frustrating season for these southern anglers,” Defazio said. “A lot of them are used to fishing a couple times a week for most of the winter but those that can get up here have to settle for a couple of days a year.”

Anglers who can’t make it to places like Lake Gogebic are left watching the remaining days of winter slip away.

“Other than Lake Erie, Saginaw Bay in Lake Huron is the place to be for catching walleye through the ice,” said Bailey Kammerer, an ice fisherman from Dryden, Michigan. “We usually use snowmobiles to get to our fishing spots but anyone who plans a trip to Saginaw Bay had better leave their fishing rods at home and bring a swimsuit.”

The recent cold snap allowed some shallow inland lakes to accumulate a couple inches of ice coverage, but angler’s hopes quickly melted with the ice by the following warm front.

Kammerer recently fish a pond near his home, but days later the ice had become too thin.

As other Great Lakes residents eagerly await the first signs of spring, ice fishermen hope that colder temperatures are on the way to squeeze in some fishing on the hard water.