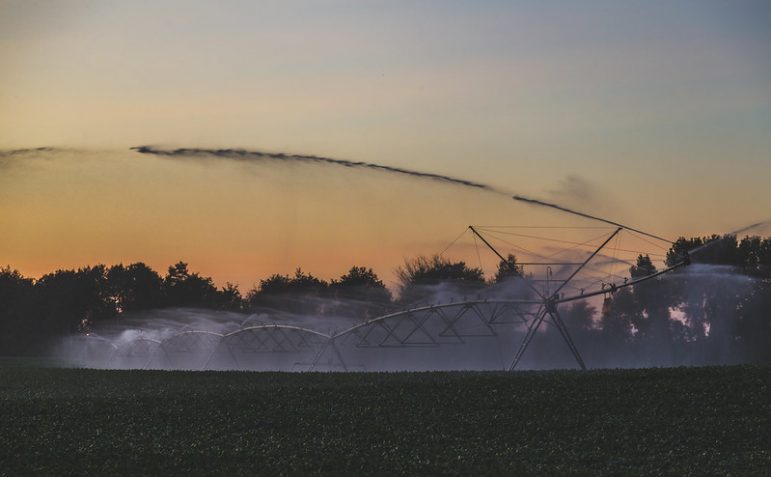 Fields irrigated in Wisconsin at sunset. Irrigation could mask the effects of global warming on streams. Image: Tony Webster

As how people change the world becomes more clear, a new issue of water use is coming into focus in Wisconsin.

The baseflow of rivers and streams that keeps them running through dry periods is groundwater, not precipitation. Drops in baseflow can harm stream’s health and the health of the organisms that rely on them. But irrigation can mask climate-driven drops in those flows, said Sue Borchardt, a doctoral student in the department of geography at University of Wisconsin-Milwaukee.

“We’re planting vegetable crops in soils that aren’t necessarily ideal,” she said. “So there’s a lot of pumping, a lot of wells. So streams have dried up, lakes have dried up.”

Her study, published in Environmental Earth Sciences, looks at baseflow, the part of a stream’s flow fed from below by groundwater.

Higher temperatures and less regular precipitation due to climate change have likely led to a decrease of baseflow in streams for years in parts of Wisconsin. But irrigation affects this trend in a couple of ways.

When those wells draw water from an unconfined aquifer—like the groundwater you might reach by digging down through the dirt—they lower the water table. Even if the water is used to irrigate land directly above the aquifer, some will evaporate before it can filter back to the groundwater, reducing baseflow.

“Groundwater is cold and it’s clear,” Borchardt said. But, irrigation turns that water into precipitation, which means that water enters the stream after running over land. This can make streams warmer and cloudier, which is a problem for animals that need cool, clear water, like trout.

When high capacity wells draw from a confined aquifer, one that’s separated from the groundwater by an impermeable layer of rock or clay, they can actually increase baseflow in streams, masking any climate-driven decline.

“You may still see a decline in baseflow, but not as much,” Borchardt said.

But, drawing water from a confined aquifer shouldn’t be considered a fix for decreasing flows in streams. Confined aquifers often don’t fill quickly when drained and the study calls the water in aquifers like these a non-renewable resource.

This research points out a problem that could be hidden by confined aquifer irrigation, Borchardt said.

What could be hidden are streams with unreliable flow, or streams that are warmer and cloudier as a greater share of their flow comes from overland sources like precipitation and irrigation.

“Starting out with the obvious, for aquatic organisms, water is their living space, so if we change that, that’s going to influence the sheer volume of habitat available,” Miller said. Beyond the obvious, warmer water has less oxygen and is less hospitable to its residents.

Where the water meets the land often supports the most life of any part of a stream, Miller said. This is the edge effect: the idea that the meeting of any two distinct habitats supports an abundance of life. 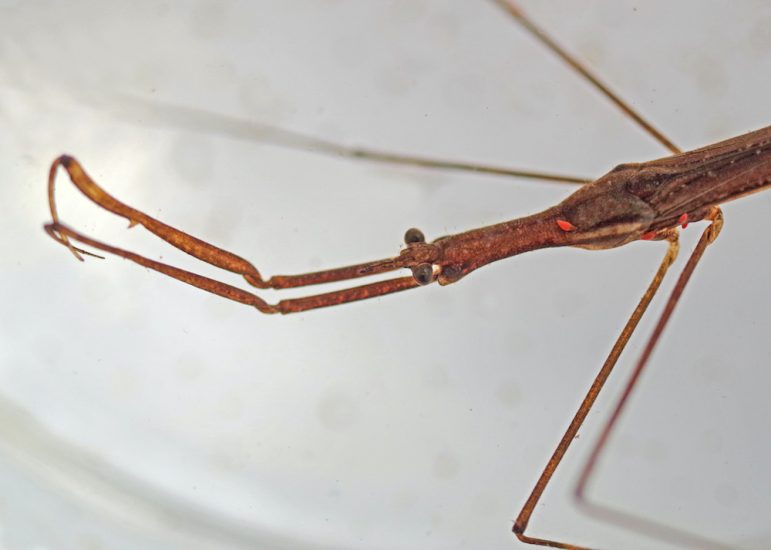 If this meeting place drops rapidly and dries out, animals that thrive there—like the water scorpion, which prefers the underside of stream banks—could have trouble adjusting, Miller said.

Changes in baseflow are happening in Wisconsin and climate change makes future stream levels uncertain. One possible future has already arrived for the Little Plover River, which has periodically dried up  in recent years, Borchardt said.

The river, known by the state to sustain persistent populations of trout, is directly affected by high-capacity irrigation wells, according to a report from the United States Geological Service.

Researchers and policymakers must keep in mind irrigation-driven uncertainty alongside that driven by climate change.

The well-being of trout and the lives of many water scorpions and other cold-water dependent species could hang in the balance.