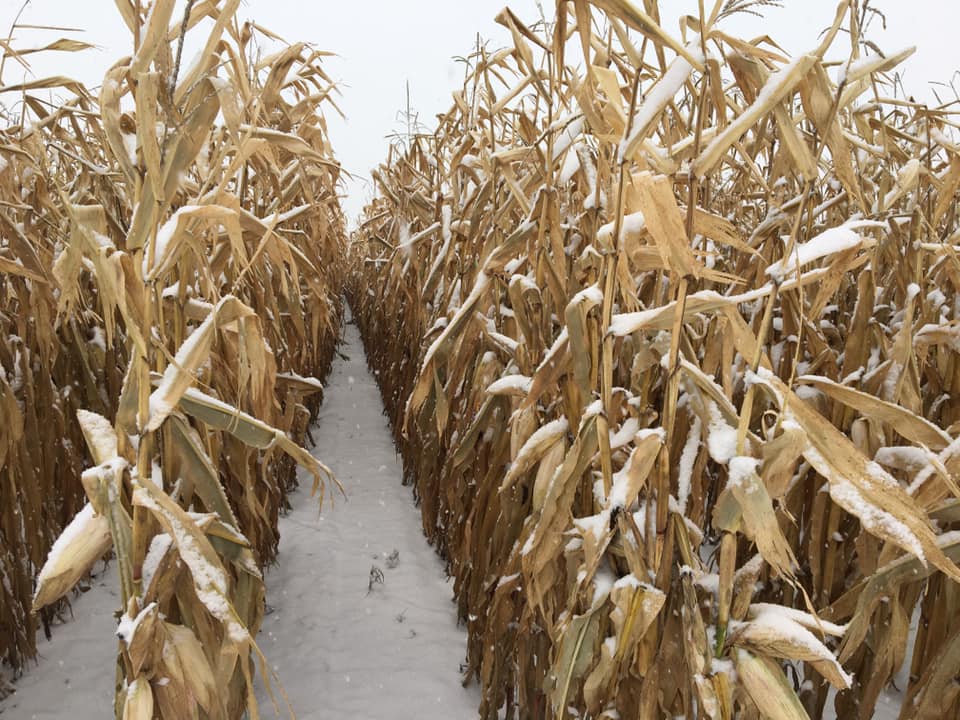 Snow on an unharvested field of corn on November 11, at B & C Gordon Farm in Sanilac County, Michigan. Image: Blake Gordon

Before Sarah Zastrow began working in farm stress management, she was an Emergency Medical Technician.

“One of the calls that stuck with me the most was about a farmer who went out to do chores and didn’t come in,” Zastrow said.

The call was from the farmer’s homebound mother who was unable to look for her son. It turns out he had killed himself.

“She called, and we had to find his body,” said Zastrow, the wife and daughter of farmers who is now a wellness expert who writes about farm stress management. 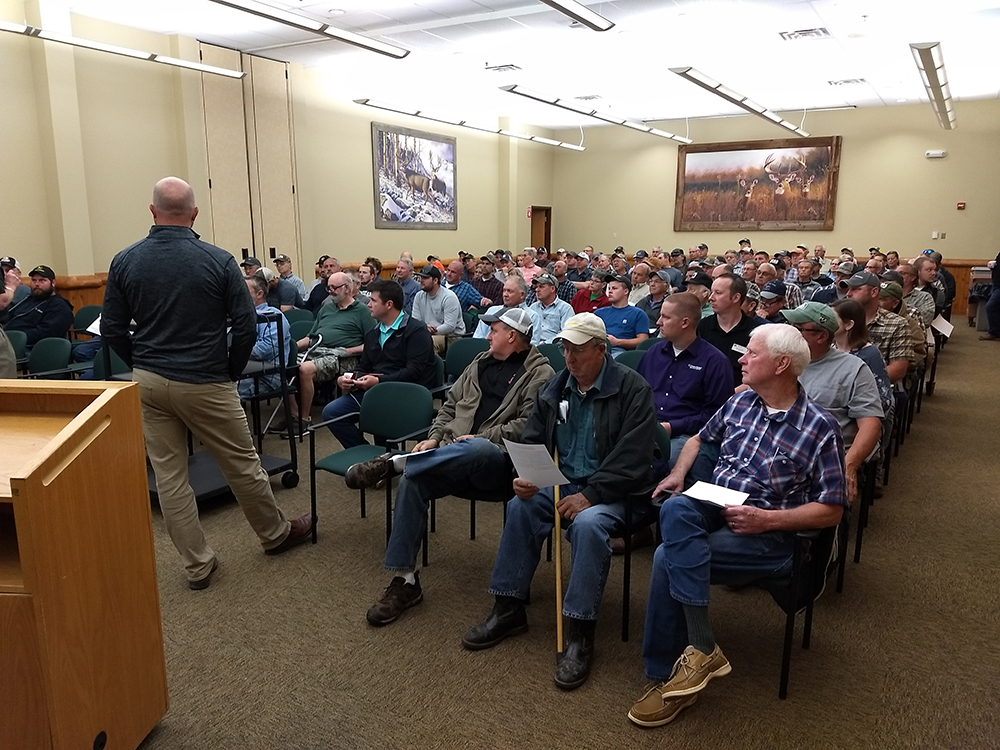 It’s one more stress in an already stressful occupation. Farmers and laborers have the highest rates of death due to stress-related conditions like heart and artery disease, hypertension, ulcers and nervous disorders, according to Colorado State University Extension. 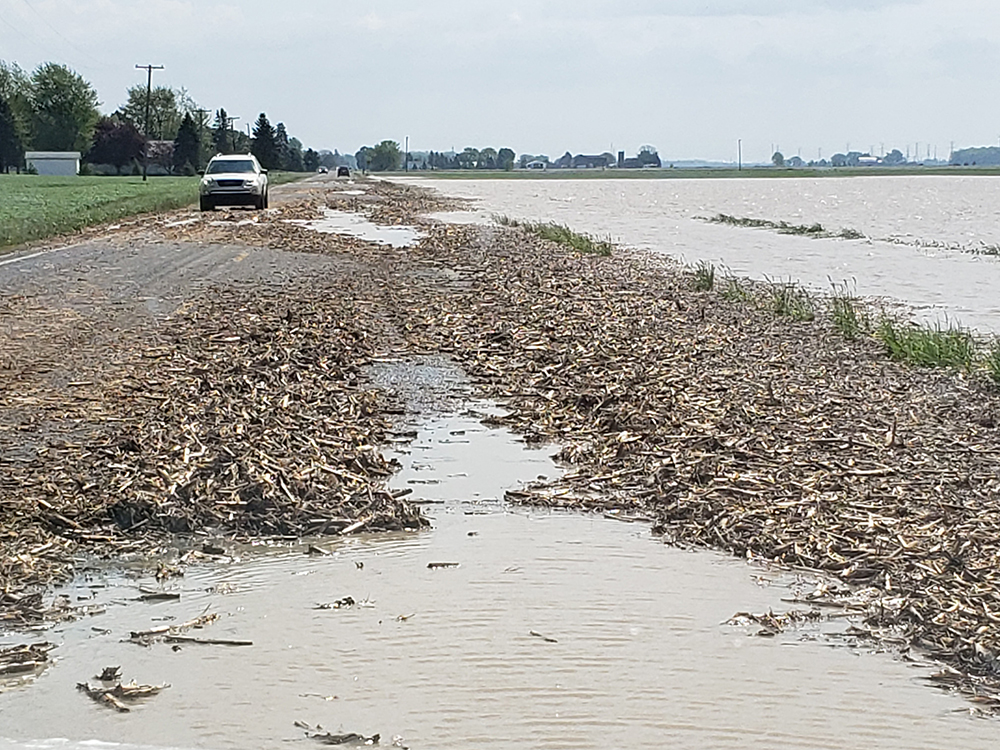 A flooded farm on May 28, in Frankenmuth, Michigan. Image: Robert Weiss

Zastrow started her online Bay Area Wellness to help people with disabilities manage pain and stress. But after one of her videos on managing farm stress gained attention, she began to focus on it.

It’s important to be able to manage stress appropriately or you could make matters worse, Zastrow said.

“When you get stressed out and have a breakdown because something doesn’t go right, you’re not problem solving effectively, your motor skills aren’t as good, so you end up busting a knuckle or breaking a part.”

Or in Butch Jansen’s case, almost losing your life.

The Monroe farmer was cleaning a tomato harvester about five summers ago when his leg got caught in the machine.

“If he didn’t have his phone with him, he’d probably be gone,” said his brother, Tim Jansen.

The farmer needed 19 surgeries to save his life. But it is his mental health that led to the physical injuries that has his brother worried.

Tim Jansen is convinced it is his brother’s high stress that led to the incident.

“He knew better, and he shouldn’t have been doing it, but he was in a hurry.

“It’s exhausting. You’re thinking about the next three moves while you’re doing the one,” he said. “He just got himself caught up in that.” 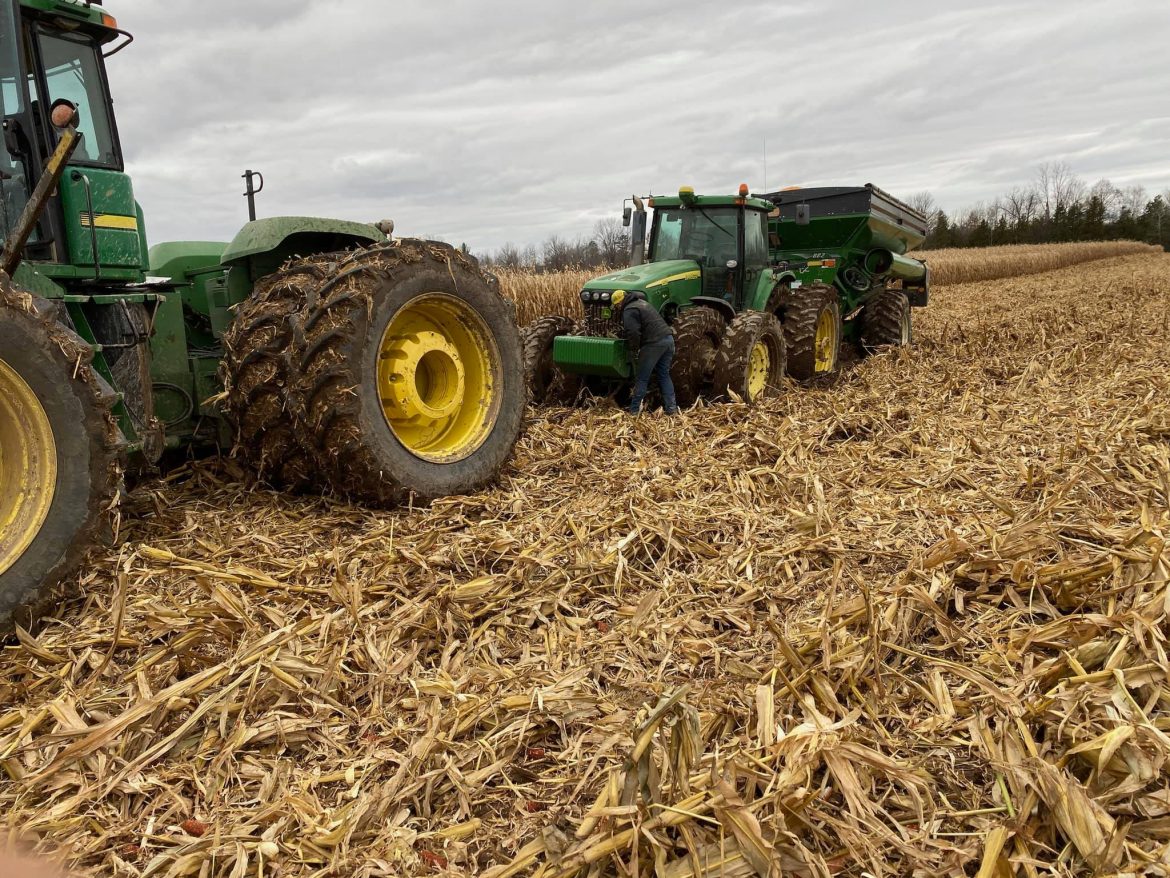 Like many Midwest farmers, the extensive rain and flooding this past spring and early summer forced Matt Crowley to cram three weeks of work into a one-week window when it was dry enough to plant.

“That week there in June I was seriously up at the shop at five in the morning and I’d walk in the house around midnight,” said the Ravenna corn and soybean farmer.

Even Tim Jansen, with his own tiling, excavation and irrigation crew to help control the water on the fields, was unable to plant 1000 acres of his 4,400-acre farm.

“To tell you that we were on a weather roller coaster over here would be an understatement,” Jansen said.

Michigan had its third wettest year on record from June of 2018 to May of 2019, said Richard Pollman, a meteorologist from the National Weather Service in Detroit.

Wisconsin, Minnesota, Indiana and Ohio also had their wettest 12-month span then.

Only five states across the country experienced below average precipitation this past year- none in the Great Lakes region. 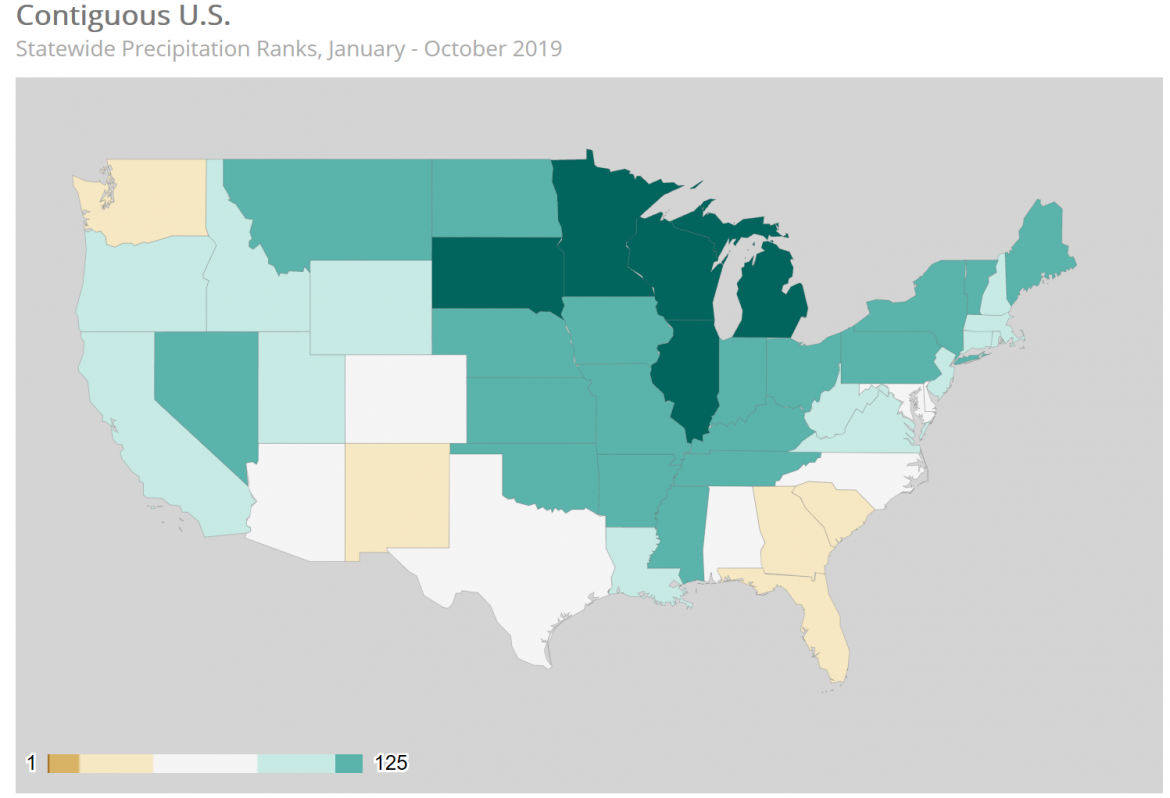 Precipitation across the United States from January- October, 2019. The darker the shade of the state, the more rain it received. Image: National Centers for Environmental Information

“I’ve been working with my dad ever since I was 13 or 14 and I don’t ever remember a spring like this,” Crowley said.

“I think we live in a world of cycles with weather,” Crowley said. “I think this is one year you might see out of 40 or 50 years.”

“Every year presents a different challenge,” he said. “Was this year abnormally wet? Yeah. Do I think it’s a trend that’s going to continue? I don’t think so.”

But weather experts say the region is getting wetter and that farmers should expect more of the same.

“If we look at the three-year time span from June of 2016 to May of 2019, all of the Great Lakes states had their wettest three years on record,” Pollman said. “So it’s not just one year, it has actually been a 3- or-5-year wet period.”

And as global average temperatures continue to increase as scientists predict, our average precipitation will too, Pollman said.

Heavy downpours and flooding across the Midwest will threaten agriculture at least for the next few decades, according to the 2014 National Climate Assessment– a report by 300 experts who summarized the impacts climate change will have on the United States.

He recommends tiling fields for better drainage and investing in larger equipment to cover more acres in less time. The wild weather swings caused by global warming may also bring more dry spells, so he suggests investing in irrigation systems, too.

Such adjustments are pricey and uncertain markets don’t ensure a return on investing in them, Gross said. That means even more stress for farmers.

“Farmers are feeling the results of our changing climate, and it is really impacting them and their business and their ability to farm,” Gross said.

Suicide rates in rural communities are higher than those in urban ones, according to a study by the Centers for Disease Control and Prevention in the Morbidity and Mortality Weekly Report in 2017.

While there is not up-to-date data showing whether the suicide rate for farmers is increasing, health professionals and farmers say they have noticed a recent increase in suicides in rural communities.

Increased calls to Farm Aid’s hotline confirm that farmers are under incredible stress, according to a 2018 statement by the nonprofit organization that raises money for farmers in need. 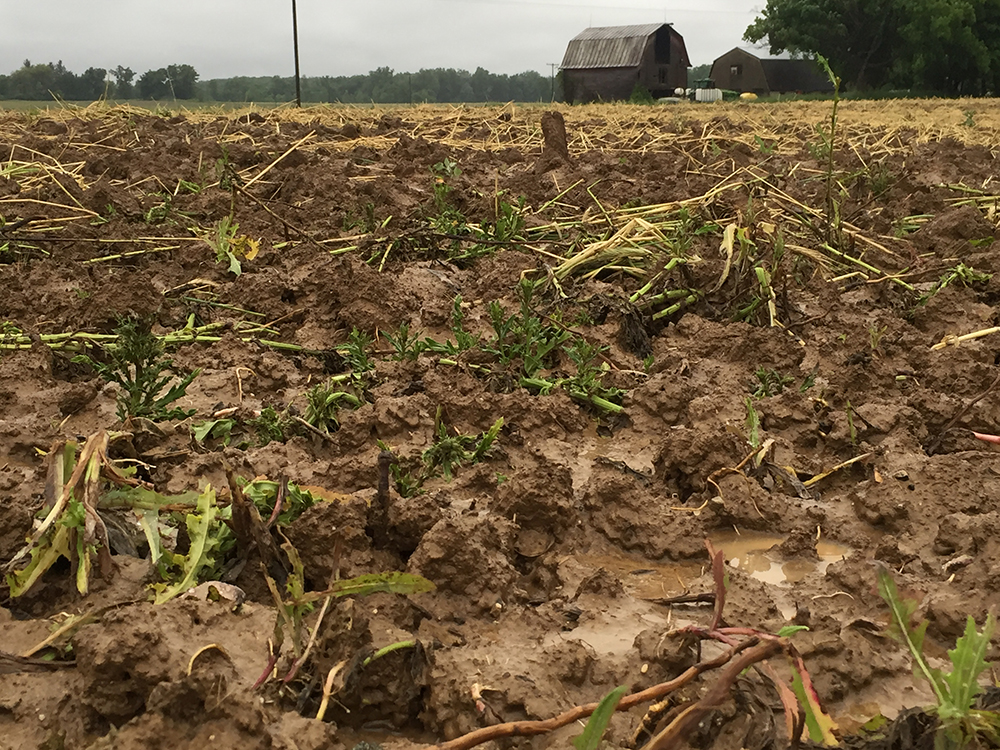 Suicide in rural communities has been especially bad this year, Zastrow said.  “We had a neighbor that committed suicide a couple of months ago.”

Everyone should have the suicide prevention hotline programmed into their phone, she said. You never know when someone might need it.

“I’ve seen suicides all over our county in the past 40 years,” Jansen said.

Farming is frustrating because you work 15-20 hours a day without knowing if you’re even going to make any money that year, he said.

“Some days at the end of the day if you didn’t already injure yourself, you’re thinking about it,” he joked. “And I laugh about it, but there’s probably a lot of truth to that.”

It’s not easy to spend time with family when you’re working 15-20 hours a day, he said.

Work once prevented him from watching his kids open presents on Christmas morning. The weather had been bad for a while, so he had to take advantage when it improved. 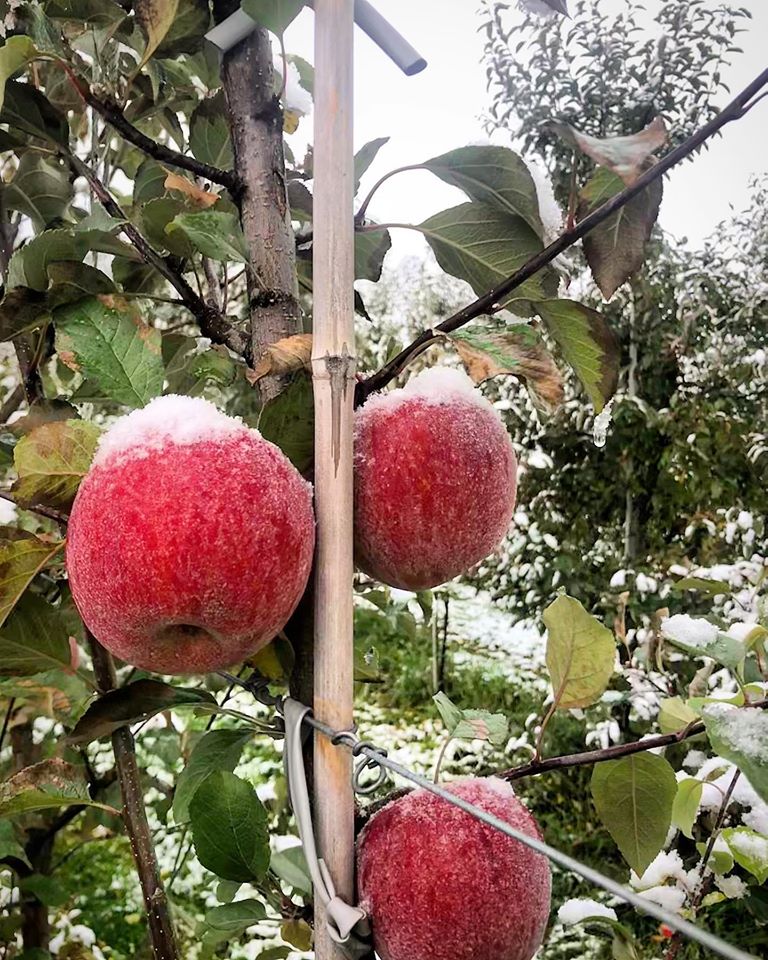 While farmers can prepare for bad weather by tiling or irrigating, preparing for mental stress is more difficult.

The most important thing is to have a good support system, Zastrow said. That includes your spouse, your family and your community.

It’s important to get off the farm sometimes, too.

“The isolation makes things seem worse than it is,” she said.

Spending time with other farmers is a good way to realize that other people may be in similar situations, she said. It’s important to know you’re not alone. 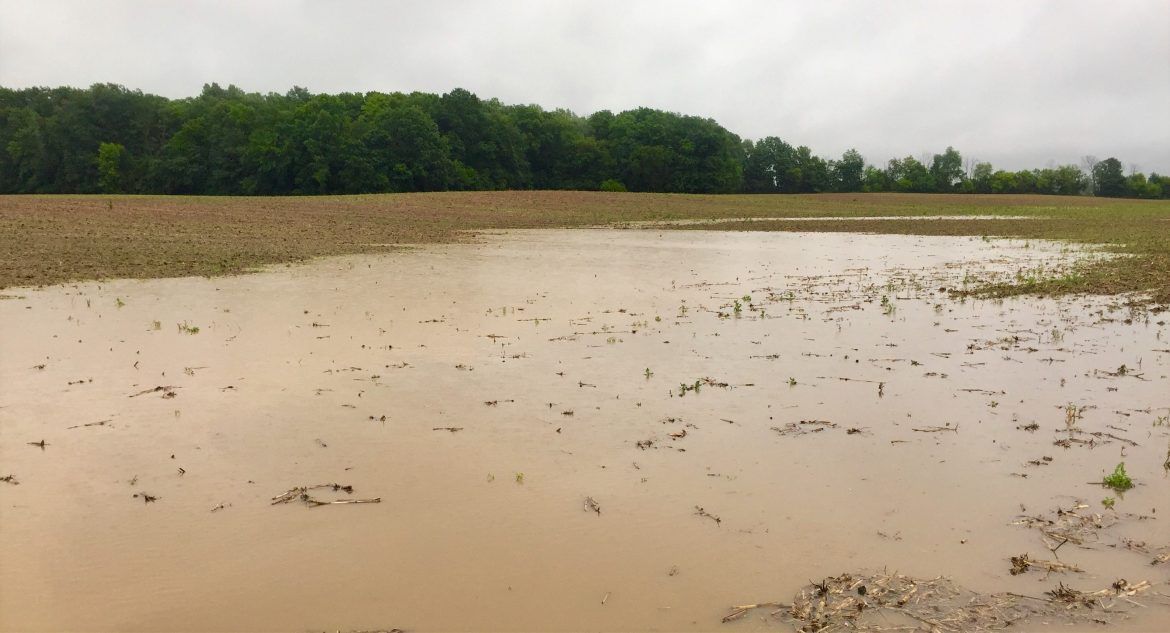 Jansen is one of them.

“I’m one of those guys that when things really bother me, I never say a word,” he said. “I don’t involve my wife or my family because I just don’t think that’s their place.

“I just need to buck up and take care of it.”

Still, he says there’s no better feeling than driving down the road and looking at your crops and knowing you did that.

“It has definitely been a financial burden and I think it’s a pretty stressful thing,” he said. “But to put it in a nutshell, you fight forward and push forward.”

One thought on “Farmer depression deepens as climate warms”