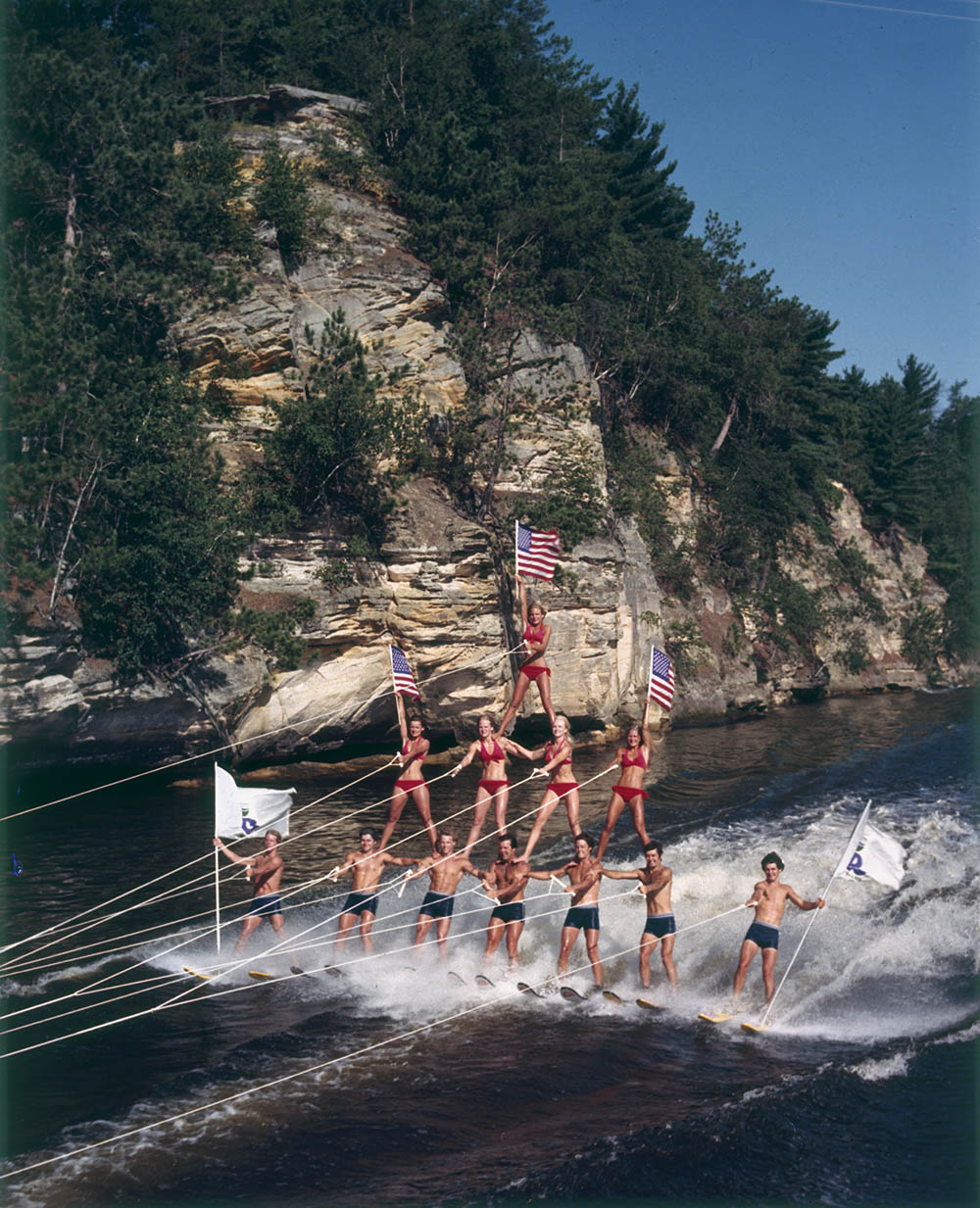 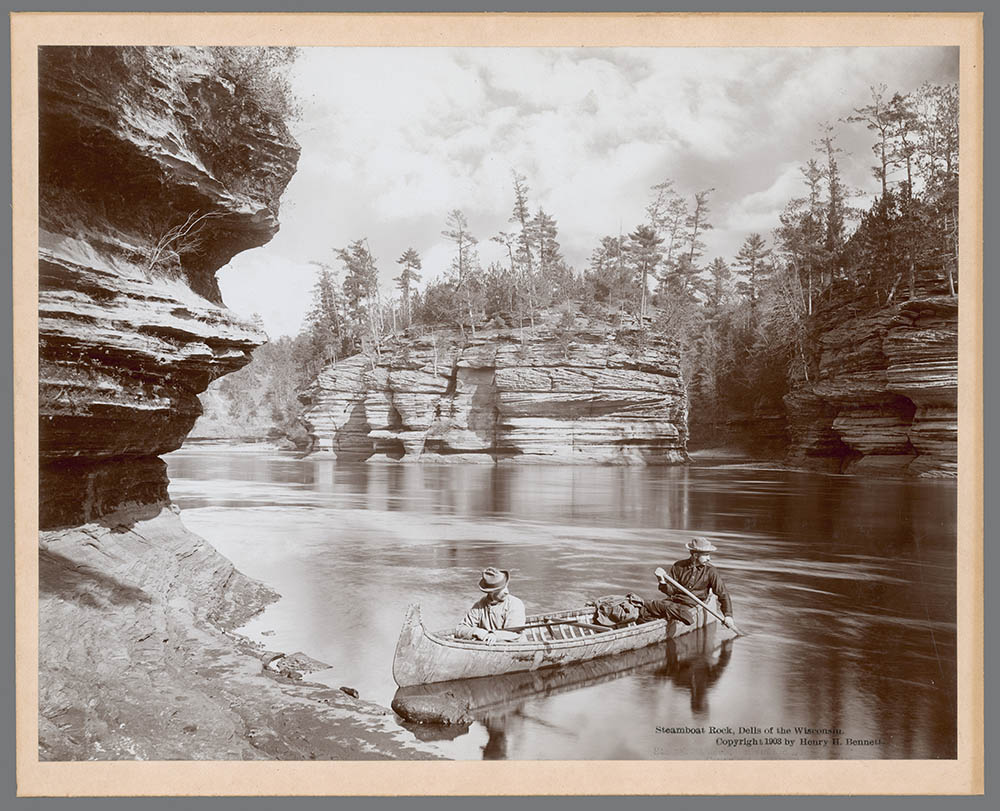 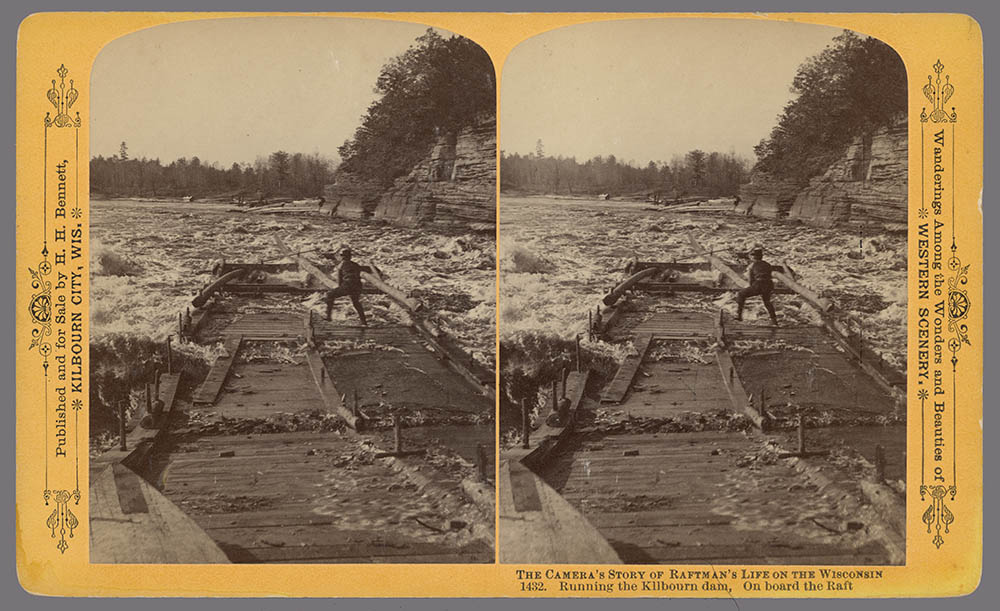 Running the Kilbourn Dam, on Board the Raft- H.H. Bennett, WHS-4270 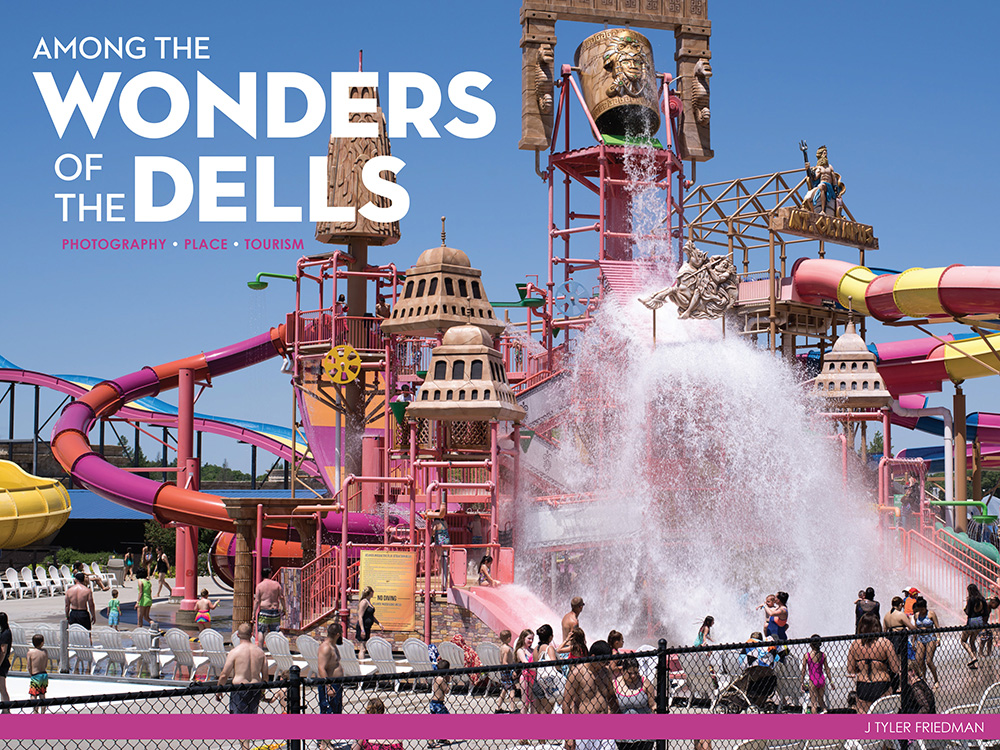 Among the Wonders of the Dells is a book about the Wisconsin Dells region by Tyler Friedman.

Why is the waterpark capital of the world in central Wisconsin?

That’s the question that caused a team at the Museum of Wisconsin Art to search for photographs to trace the history of the Wisconsin Dells in central Wisconsin.

The result is “Among the Wonders of the Dells,” a book that tells the history of a region that evolved from a rustic getaway at the turn of the 20th century to a popular tourist destination today.

The photographs in the book also are on display in an exhibition at the museum in West Bend, Wisconsin.

The project was already in the beginning stages when the museum’s associate curator and the book’s author, J Tyler Friedman,  joined it in 2018. It started as an exhibition comparing the Dells then and now. The finished project features the work of eight photographers –  photos that were taken from the 1860 to 2018.

The name Wisconsin Dells came from a French word “dalles” which translates a large slab of rock.

The history behind how the Dells became the tourist destination it is today has been in the making for the past 160 years, Friedman said.

Photographer H.H. Bennett is one reason. His photos of the Dells helped drive the rise in tourism, according to John Gurda, a historian and contributor to the book. The photos were sold as prints, guidebooks and stereoviews. They featured things like winding rivers, a man jumping across a cliff, and of a family looking out over the forest. They prompted thousands of people to want to see the Dells for themselves. This led to the number of tourists rising from 6,000 a year in 1874 to 60,000 by 1904.

Choosing what photos to use was not easy, Friedman said. His team searched through thousands of them provided by multiple sources, including the family of photographer John Trumble and the Wisconsin Historical Society.

To prevent damage to photos from the 1800s,  Friedman’s team blacked out windows and covered the light bulbs in their workspace.

The book includes images from postcards,  marketing materials and hundreds of photos that show the growth of the Dells. What started as an industry of guided tours of the Dells’ landscape and rivers in the 1800s turned into a highly advertised tourism destination in the 1900s. The photos show a rise in infrastructure –  from simple wooden bridges of the past to the large water slides of today.

According to Friedman, those who might enjoy this book are tourists wanting a memento of their trip. It should also appeal to those interested in photography, Wisconsin history, art history enthusiasts,

“The Dells story ties together so many threads, it’s a beautiful story for everyone,” he said.

The book is available on the University of Wisconsin Press website for $34.95.