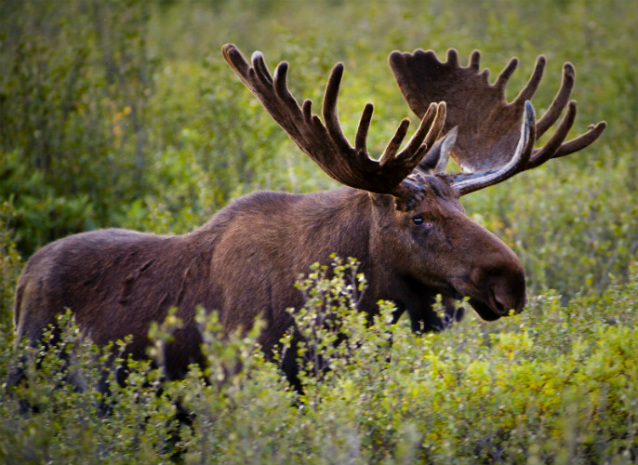 The resolution cites a recent Michigan Technological University estimate of 2,060 moose on the remote island in Lake Superior, up from 515 in 2011. The number grew so fast because the population of their only natural predator, the wolf, had dropped to only two by last year.

In 2018, the Park Service launched a five-year plan to rebuild wolf numbers by relocating animals from Minnesota, Ontario and the Michigan mainland. “The primary goals of the project are to ensure that wolves form packs, reproduce and act as predators on the park’s burgeoning moose population,” the agency said.

The most recent successful releases — three wolves from the Upper Peninsula — occurred in early and mid-September. A fourth died after its release, the Park Service said, and officials plan a necropsy at the U.S. Geological Survey’s National Wildlife Health Center in Madison, Wisconsin.

The Park Service had considered but rejected the idea of moose hunting on the 205-square-mile island, a designated wilderness, Isle Royale Superintendent Phyllis Green said.

The agency’s 234-page environmental impact statement said, “Public hunting would be inconsistent with existing laws, policies and regulations.” It also cited “the difficulty related to logistics, increased staffing requirements, removal of carcasses from the landscape and the impacts to wilderness character.”

The lead sponsor of the resolution, state Rep. Steven Johnson, R-Wayland, who has hiked on Isle Royale, said the Park Service should reconsider its no-hunting decision.

The resolution asserts that a hunt would “help restore ecological balance among moose, wolves and vegetation.”

It says, “The increased and unsustainable moose population on Isle Royale has created an ongoing ecological dilemma as the moose feed on the park’s balsam fir trees and other vegetation. The rapidly expanding moose herd will devastate these slow-growing trees and could eliminate them from Isle Royale.”

Johnson said, “Unfortunately, we’ve reached the point where the wolf population isn’t sustaining itself well. There are too many moose. Adding wolves isn’t going to fix that overnight.”

As for hunters, he said they would pay well for “the experience of a lifetime,” would generate revenue for the park and “would boost the economy of the Northwest Upper Peninsula,” Johnson said.

Isle Royale has “an overpopulation of moose, LaGrand said, and people “willing to cull them.”

Legislative resolutions aren’t binding and don’t have the force of law. Rather, they merely express the sentiments of the Legislature.

Johnson said, “We’re just advocating the Park Service re-look at this. They turned it down but the problem has gotten worse.”

During a public comment period in 2016 when the Park Service was deciding on a wolf management plan, Michigan United Conservation Clubs advocated to allow hunting there through a drawing or lottery.

“Our members felt managing the (moose) population through hunting was a more viable alternative than the relocation of wolves,” MUCC public affairs officer Nick Green said.

The resolution says wildlife management practices allow some form of hunting in about 40 national parks.

Hunting is legal in a few Great Lakes-area national parks.

For example, most of Sleeping Bear Dunes National Lakeshore in Michigan is open to hunting. The park also holds a special hunt on North Manitou Island to control the deer population there. In addition, Congress specifically authorized hunting at Michigan’s Pictured Rocks National Lakeshore and at Wisconsin’s Apostle Islands National Lakeshore when it created those parks.

In addition, some Native American tribes have treaty rights to hunt in some national parks, she said.

The resolution is pending in the House Natural Resources and Outdoor Recreation Committee. If passed, it would go to the Park Service, members of Michigan’s congressional delegation, the governor and the state Department of Natural Resources.