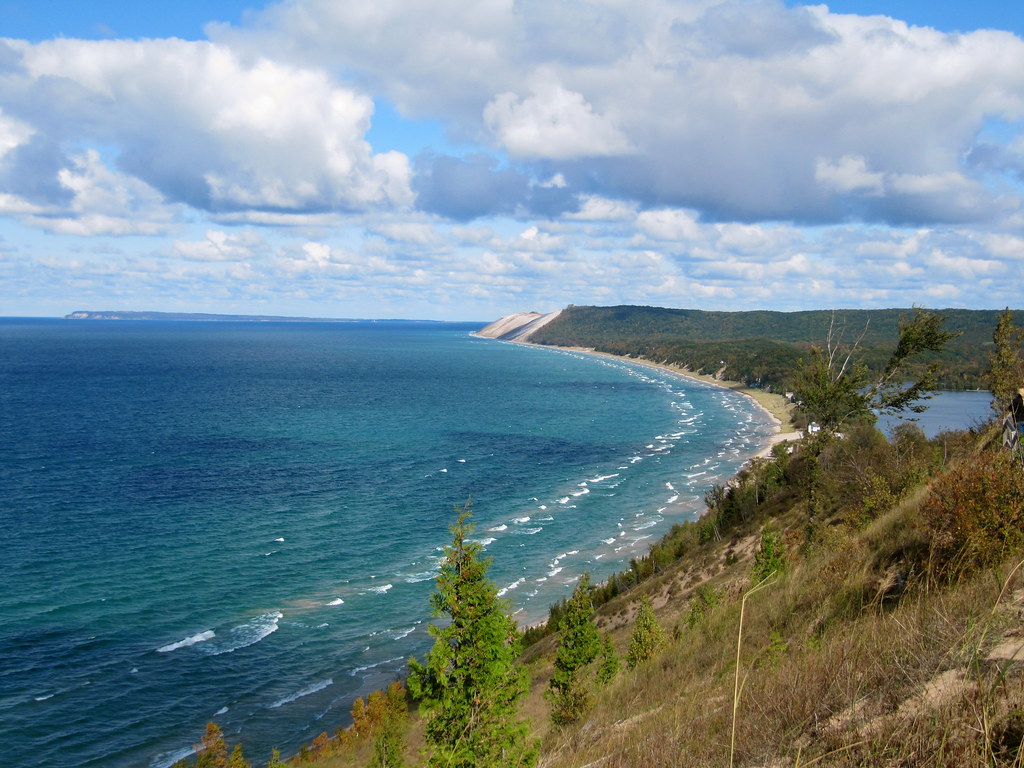 Sleeping Bear Dunes National Lakeshore is one of the fastest warming places in the United States due to global warming. Image: Rachel Kramer

Climate change is hitting one treasured corner of Michigan harder than nearly anywhere else in the country.

The area around Traverse City and Sleeping Bear Dunes National Lakeshore has already warmed two degrees Celsius since preindustrial times, double that in most of the rest of the country, according to The Washington Post’s analysis of NOAA, NASA and other temperature records, dating back to 1895.

That doesn’t give the region any cushion under the two-degree global limit set by the Paris Climate Agreement to avoid the most catastrophic of climate change’s effects.

The warming in the popular tourist destination—the national lakeshore saw over 1.5 million visitors last year—is not yet a catastrophe. But it is changing how environmental groups approach conservation in the area.

Sleeping Bear Dunes and Traverse City joined places like the high desert of Oregon, portions of the western Rocky Mountains and parts of the eastern seaboard, as locations warming faster than the national average, according to the Washington Post. Though most warming hotspots were in the west, in the Great Lakes region, parts of northern Minnesota and a spot on Michigan’s lower peninsula’s northeast coast had also reached two degrees of warming.

The warming of the Sleeping Bear Dunes area makes sense for two reasons: a higher latitude and warming Great Lakes. Though warming is often uneven at a regional level, it fits global trends.

In general, the higher in latitude the higher the rate of warming, said Kim Hall, a climate change ecologist with The Nature Conservancy’s North America region. It’s the same reason Alaska is one of the United States fastest warming regions and the Arctic is warming faster than anywhere else on Earth.

Though warming is uneven across higher latitudes, they warm faster for a variety of reasons. One is that warming means there is less snow and ice to reflect sunlight. Snowless, iceless land or water is darker and absorbs more of the heat, NOAA’s Climate.gov reports.

Further, as the Great Lakes experience less ice cover for shorter periods of time, there are more times when the lakes are warmer than their shores. The lakes can have a warming effect on their shorelines, especially in the winter, Hall said.

A changing climate means it makes less sense to conserve land where threatened plants and animals are now, Howard said. Instead, land conservancies like The Nature Conservancy are shifting some of their focus to protecting habitats suitable for threatened species, regardless of whether the species live there yet.

It’s a shift to protecting nature’s stage and away from focusing strictly on nature’s players, said Howard, who used to do conservation work in the Sleeping Bear Dunes area. It’s an acknowledgement that climate change will move some species off their natural habitat and others into the space they’ve vacated.

This is leading to greater collaboration among land conservancy organizations, Howard said.

“I don’t think there’s any one land conservancy that can address climate change on their own,” he said.

Conservation groups are working together to protect suitable habitat and pathways that climate threatened species might migrate along from newly unsuitable climates to suitable ones.

In a landscape that has already struggled to fight off at least one invasive species, climate change could be leading to more disruptions by other invasive species moving north.